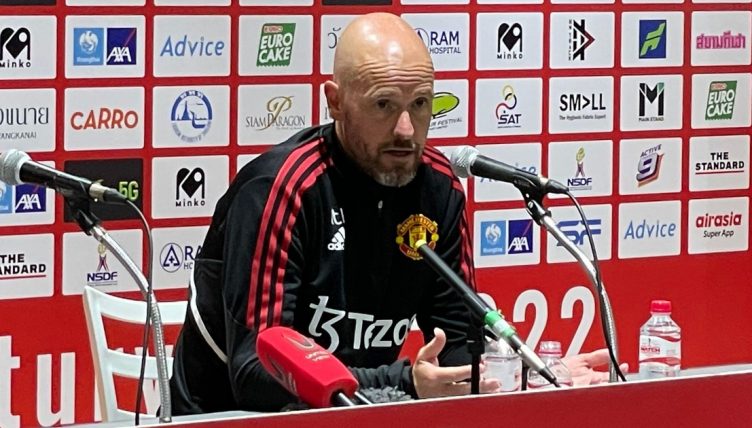 The Erik ten Hag era is underway at Manchester United in style with a resounding 4-0 victory over historic rivals Liverpool in a pre-season friendly in Bangkok.

Big caveats must apply, of course, but the Dutch coach’s first match offered plenty of reasons to be optimistic that the Red Devils might just turn a corner after their disastrous 2021-22 campaign – their worst of the Premier League era.

Liverpool manager Jurgen Klopp fielded 30 players on the day and near-enough three separate XIs as he changed things up at half-hour increments, with the side that started the match looking unrecognisable to that which took to the pitch in their last outing, the Champions League final defeat to Real Madrid.

But you can only beat what’s in front of you and Ten Hag’s side produced a fine performance that was noticeable for its more energetic and aggressive edge.

Jadon Sancho scored United’s opener after just 12 minutes, and their lead was doubled thanks to a cheeky lob from Fred on the half-hour mark. Three minutes later it was three, with Anthony Martial notching on his first appearance back following an underwhelming half-season loan at Sevilla.

Both managers made a raft of changes in the second half, with Liverpool’s XI looking a great deal stronger, but it was United who extended their lead, making it 4-0 in the 76th minute as Amad Diallo assisted fellow youngster Facundo Pellistri.

The victory saw Bruno Fernandes and Ten Hag presented with the Bangkok Century Cup after the final whistle at Thailand’s Rajamangala National Stadium.

“We are satisfied today because I think there was a team with great spirit. We know we are just starting,” Ten Hag told MUTV in his post-match interview.

“We know we made some mistakes in pressing and conceded some chances but also we created a lot and I think our team played bravely, they were proactive and we had to work really hard to get out of some mistakes. Of course, we are happy with the first game.

“It was not only the result. I know we have good players but we have to play as a team. We started the first game well so I am happy.”

The new United boss also spoke of “room for improvement” and the importance of not overestimating the result against a much-changed Liverpool side.

With all that in mind, here are 10 impressive stats from Manchester United’s victory against Liverpool:

– This friendly demonstrated a more clinical edge from Manchester United. Liverpool actually registered superior xG (via @OptaAnalyst) – 1.7 to 1.5 – and twice as many shots – 19 to 8 – yet Ten Hag’s men won 4-0.

– That efficiency was underlined by scoring with four of their five shots on target and 44% of their nine attempts in total.

– All this without Cristiano Ronaldo, who scored 14 more goals than any other player last season, and accounted for 33.8% of all United’s goals in all competitions.

– Last season, Martial managed just one goal in 367 minutes for United and one goal in 674 minutes for Sevilla. He matched that tally in his first 45-minute performance of pre-season.

– Jadon Sancho scored the opener and was United’s man of the match on the right side of the attack. He opened the scoring after just 12 minutes, having averaged a goal or assist every 317 minutes in a difficult debut season in the Premier League last term. Looks like he’s responding to Ten Hag’s training methods.

– United kept just one clean from their last 12 outings under Ten Hag’s predecessor Ralf Rangnick. They kept just eight clean sheets in the Premier League last season and conceded more goals than relegated Burnley. Keeping Liverpool out in Ten Hag’s first match can be seen as a sign of progress.

– This was United’s biggest win against Liverpool since April 2003, when Ruud Van Nistelrooy, Ryan Giggs and Ole Gunnar Solskjaer scored in a 4-0 Premier League victory at Old Trafford.

– The result stands in stark contrast to last season’s results against Jurgen Klopp’s Reds – a 5-0 defeat at Old Trafford and a 4-0 loss at Anfield, United’s worst-ever aggregate defeat in the Premier League era.