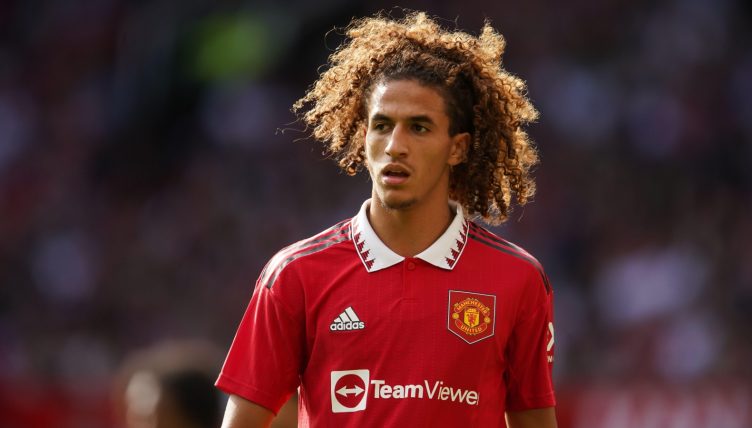 Football Manager fans, rejoice: FM2023 is here. Say goodbye to the pretense of a social life for the next few months, strap yourself in and try leading your favourites to ultimate glory.

If you fancy yourself as the next Fergie, Man UFC present an interesting and unique challenge in the latest edition of the game. They’re one of the biggest clubs in world football, but have fallen off their perch and are aiming to get back.

While blessed with the spine of an excellent team, it cannot be denied that the United squad still needs a significant overall to challenge Liverpool and Manchester City.

But United continue to churn out some prodigiously talented starlets at a quite ridiculous rate. You’ll be spoilt for choice if you choose to manage the club on FM2023.

We’ve taken a look through the 15 players that FM Scout have earmarked as United’s current crop of wonderkids.

Having enjoyed loan spells at Birmingham and Derby County in recent seasons, Mengi has also made his first-team bow for United during a Europa League match against LASK in 2020.

While he’s not been fully intergrated into Erik ten Hag’s first team yet, the centre-back with a FM rating of 77 has the potential to become a useful squad player for enterprising Man UFC players.

Having recently signed his first senior contract with United, Jackson has spoken about the mentoring he’s recieved from fellow Scot Darren Fletcher at Old Trafford.

“Darren Fletcher has been a big help for me. He’s a really nice guy and he makes a point of always talking to me,” he told Manchester Evening News. “He’s always asking me if there is anything I need or any help he can give me.

“Just before I left to come out to Israel with Scotland he pulled me aside and had a quick chat and wished me all the best. He said he would be watching us.

“He had an amazing career with Manchester United and with Scotland. Any advice he can give me is a big help. He’s a man I look up to and he’s a great role model for the younger players like me.”

With a FM ceiling of 78, we wouldn’t bet against Jackson becoming a Scotland international in your save.

Despite being offered a new contract by Real Madrid, Fernandez decided to leave Spain and join United’s academy in 2020.

The 19-year-old has all the potential to become the perfect modern-day full-back, combining his defensive skills with a massive attacking threat down the left flank.

He won United’s Under-23s Player of the Year award in 2021-22 and is spending this season at Championship side Preston North End. Expect to see him in the Premier League sooner rather than later.

Laird is currently at QPR and has made 12 appearances so far this season. In that time he has scored one goal and registered two assists showing that he can contribute to the team going forward effectively.

His development is going well and, with right-back not being the most certain position in United’s current starting XI, plenty of enterprising managers will be keen to train Laird into a cheap alternative to Diogo Dalot and Aaron Wan-Bissaka.

The boffins at Football Manager clearly rate Hannibal highly with a potential ceiling of 84.

And, in real life, he is slowly being bedded into the Birmingham squad during his season-long loan at the Championship club. The Tunisia international has made 10 appearances so far but only three starts.

However, in his limited time on the pitch, he has already endeared himself to the St Andrew’s faithul.

His teammate Juninho Bacuna praised the 19-year-old midfielder for his performance against Hull City in October, telling Blues TV: “He’s a good player – he likes to play with the ball, make runs and he’s good for what the team needs.

“He’s young, got loads of energy and he’ll keep going for 90 minutes and that’s good for the team.”

Train him uup on Football Manager and you won’t be disapointed.

Having been named on the United bench against Newcastle recently, Mainoo is clearly highly thought of at Old Trafford – and his Football Manager rating reflects the slowly increasing hype around his name. 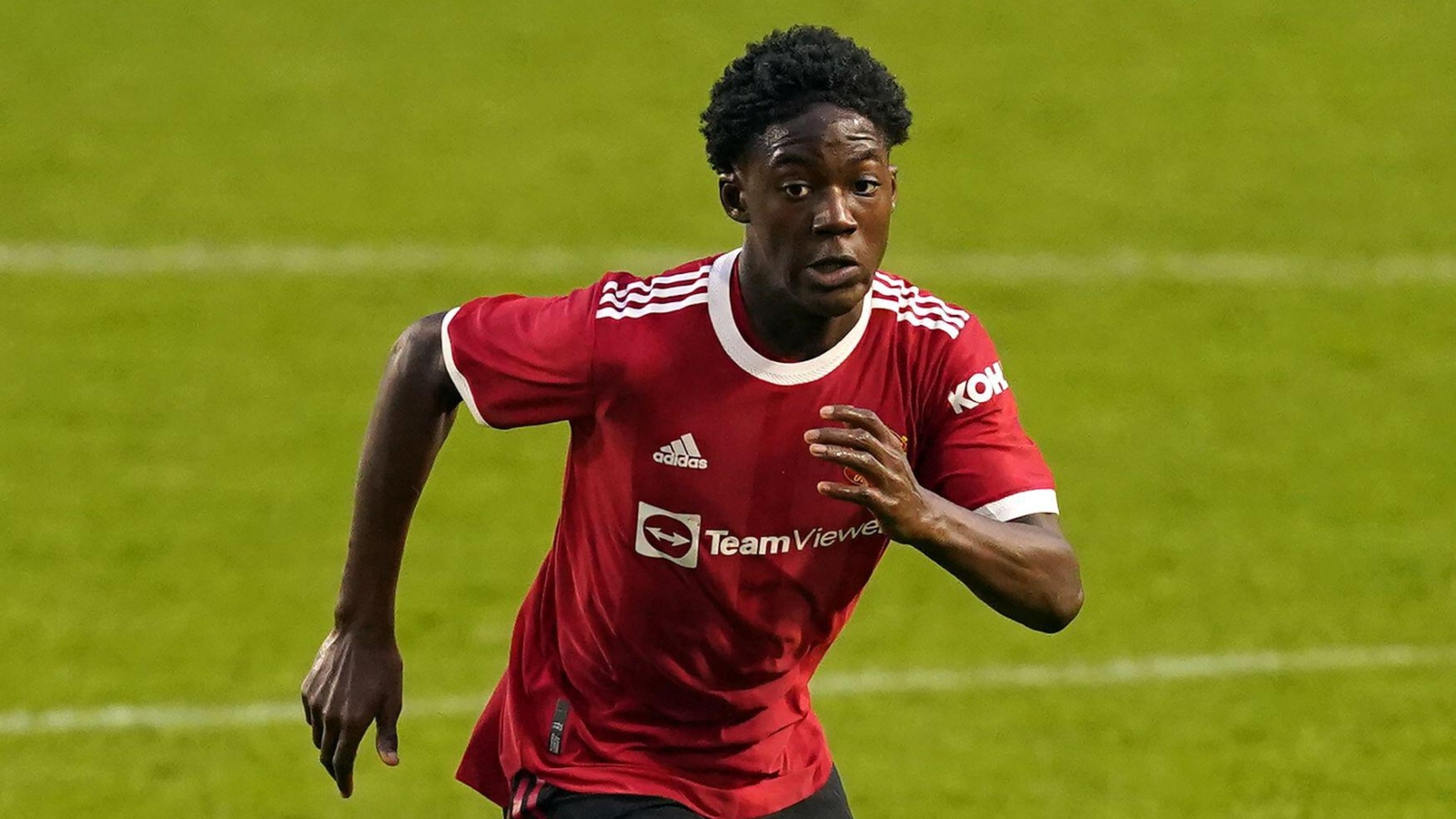 READ: Everything you need to know about Man Utd starlet Kobbie Mainoo

United’s official website describes Gore as a ‘tenacious and skilled attacking midfield for United and England’ and Ten Hag clearly agrees having given Gore the chance to train with the first-team squad after United’s recent victory at Everton.

His FM potential rating is 80, meaning he could become an invaluable asset in the right hands.

You know all about Elanga; the Sweden international became Ralf Rangnick’s go-to guy last year for his fearless dribbling and shot of energy in a moribund United side.

And, despite not getting quite the same opportunites under Ten Hag, Elanga remains a real prospect and has been given a potential rating of 78 by Football Manager 2023.

“He has an amazing maturity for such a young lad – he has always been thrust into the older age groups,” former United coach Neil Ryan told The Athletic about Shoretire.

“Not always every decision to do that based purely on what the coach thinks. A lot of different factors have come into that, almost fast-tracked at times.

“I think it could have been balanced better; have him in his own age at certain times. It would have been nice for him to be involved in the Youth Cup last year — he has missed out on some big moments there.

“He is technically gifted, he is quite ruthless and tough as a boy, got a good mentality — for me personally never one problem in the five, six years I worked with him.

“He can play left, right, No 10, as a false nine, he can play deeper midfield as well.”

We have nothing to add other than to inform you his potential rating on FM 2023 is 85.

Get this kid in your first-team squad. Immediately. 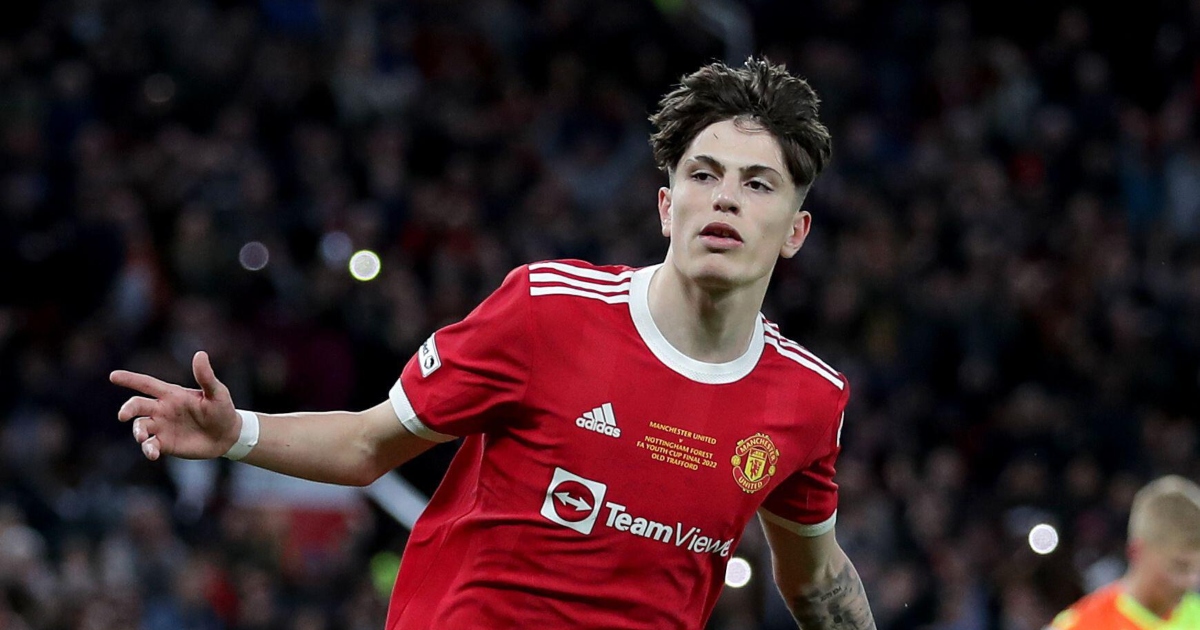 Pellistri might not have played a minute under Ten Hag but he’s already a Uruguay international with more than one eye on Qatar. His ceiling of 81 isn’t to be sniffed at.

Diallo is one of the more recognisable United wonderkids and will surely be an asset for Football Manager players.

The 20-year-old Ivory Coast international has shown flashes during his appearances for the Red Devils’ youth team and out on loan at Rangers last season, but he’s yet to find consistency at a senior level.

“He just needs to bring it all together, really, and the team needs to know that when he is on the pitch he is going to help us win football matches rather than flit in and out of the games,” Sunderland manager Tony Mowbray said earlier this week.

And Diallo responded at the weekend with his first Sunderland goal. He could go far.

Having been poached from Liverpool, Ennis was expected to play a more prominent role for the under-18s this season until tearing his ACL in August.

Still, the 17-year-old has plenty of time on his side to fulfil his undoubted potential.

Compared to compatriot Martin Odegaard, Hansen-Aaroen has all the flair and playmaking ability to become a brilliant attacking midfielder in the upcoming future.

“He has those little bits of quality,” Under-23s manager Neil Wood said after Hansen-Aaroen registered an assist against Young Boys in the UEFA Youth League in December 2021.

“He has the ability to beat people one against one, he’ll take the ball in the game and dribble or a nice touch off his back foot which is really smooth and I think that really stands out.”

The 17-year-old has become a key player for the Under-23s and recently made his unofficial first-team debut for United, coming off the bench at Old Trafford in a pre-season friendly against Rayo Vallecano.

With Cristiano Ronaldo throwing all his toys from his pram and Erik ten Hag looking for another striker, players might be tempted to spend big on the likes of Victor Osimhen or Jonathan David.

There may be no need; McNeill will be hoping to follow in the footsteps of fellow academy graduate Marcus Rashford and make a seamless transition to first-team football.

The 18-year-old striker reportedly scored over 600 goals for Manchester City’s youth teams before joining the red half of Manchester in 2020.

He’s carried on banging them in for United’s youth teams and netted five goals in the FA Youth Cup in 2021-22, including two in the semi-final win over Wolves.

With a potential rating of 84, McNeill should be integrated into your UFC squad as a matter of principle.