Comparing Liverpool and Man City’s PL records with every referee 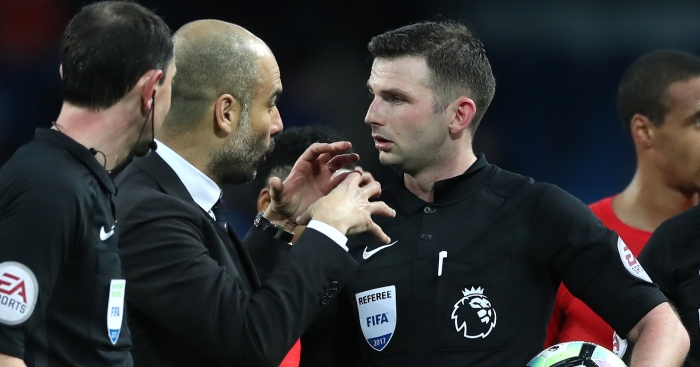 Manchester City‘s title battle with Liverpool has already reached the ‘conspiracy theories about referees’ stage, so we thought we’d look at the stats.

Fans have been bombarding social media with personal theories about certain officials, while even Pep Guardiola has spoken about Liverpool’s perceived tendency to get decisions, even if this might be part of a wider meta-game ahead of the top of the table clash.

We decided, then, to take a closer look at how both City and Liverpool have fared with different referees in charge of their games.

We’ve gone back to the start of the 2016-17 season, the first which saw both Guardiola and Klopp in charge of their respective teams, to find out the number of points averaged by each of the title contenders based on the identity of the man in the middle.

The data below is just for those referees who have been active in the Premier League in each of the seasons in question, even if certain officials went entire seasons without taking charge of one or both of the teams.

Oh, and just so you can measure it against general figures, Manchester City have averaged 2.41 points across all games during the period in question, whereas for Liverpool the number is 2.23.

City’s lowest average comes in games officiated by Atkinson, who awarded Wolves a controversial goal against them last season when Willy Boly appeared to use his hand to score.

He’s hardly in Liverpool fans’ good books, however, having made some calls in the recent 1-1 draw with Manchester United with which they didn’t agree and played a part in the VAR controversy against Aston Villa.

Oliver has taken charge of both teams more frequently than any other referee, with both suffering defeat at least once under the man from Northumberland.

Both lost to Leicester in the 2016-17 season with Oliver in charge, while he was also in the middle when Chelsea beat City 2-0 last season. He has been announced for the upcoming meeting.

Michael Oliver will take charge of this weekend's title showdown between Liverpool and Manchester City at Anfield. pic.twitter.com/Ok39G0h4FC

Marriner has taken charge of notable defeats for both teams in recent years – Liverpool’s 4-1 loss at Tottenham in the 2017-18 season and City’s reverse against the same opposition the previous year.

He also has a recent Liverpool-City game on his CV: the Reds’ entertaining 4-3 win in January 2018.

FULL TIME | We fight till the end! #lfcvcity

A 100% record for City and just one win from four for Liverpool would be notable if the sample size wasn’t so small.

That said, if we go further back, you might remember comments from Brendan Rodgers about the official, who hails from Bolton.

Brendan Rodgers says he hopes they don't get a "Greater Manchester referee" again when playing a Manchester team. Lee Mason from Bolton