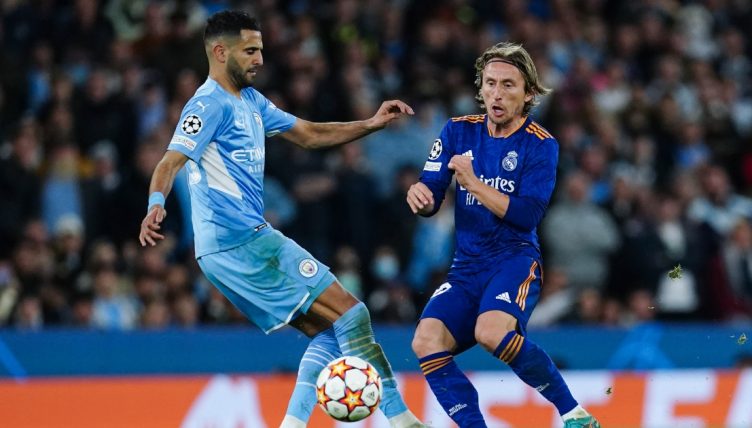 Manchester City and Real Madrid played out a seven-goal thriller in their Champions League semi-final first-leg tie at the Etihad Stadium and we’ve rounded up some stats that emphasise just what a brilliant game this was.

Pep Guardiola’s side edged a 4-3 victory ahead of next week’s return match at the Bernabeu. Kevin De Bruyne and Gabriel Jesus fired City into an early two-goal lead before Karim Benzema halved the deficit before half-time.

Phil Foden added a third for the Premier League side following the interval with a powerful header inside the area.

The comfortable cushion was once again short-lived as Vinicius Jr punished Guardiola’s men on the counter-attack with a clinical finish.

Bernardo Silva rifled into the top corner to restore his side’s two-goal advantage again in the 74th minute.

City had one foot in May’s final until Aymeric Laporte was penalised for a handball inside his own box. Benzema stepped up and doubled his tally from the penalty spot with a cheeky Panenka.

Despite City boasting a one-goal lead in the tie, predicting who will progress into the showpiece final in Paris is difficult with Madrid having the opportunity to bounce back on their hallowed turf in little over a week’s time.

But we probably won’t see as many goals in the Spanish capital as we did in Manchester.

Here are 10 incredible stats from a match between two European titans that had it all.

– The seven goals scored in the game mean this semi-final was the joint-highest scoring ever in the Champions League (Ajax 5-2 Bayern Munich in 1995 and Liverpool 5-2 Roma in 2018 are the two others).

– No English player has scored more goals in the Champions League while aged 21 or younger than Phil Foden (Wayne Rooney is level with the England international on nine).

This control and cross really deserved the finishing touches…

– Kevin De Bruyne’s opening goal after just 93 seconds was the quickest goal City have ever scored in the Champions League.

–  The Citizens have won each of their last three Champions League meetings with Real Madrid – no other English club has won more than two matches overall against Madrid in the competition.

– Karim Benzema is the first player in the competition’s history to score as many as five goals away from home in the knockout stages against clubs from a single nation in a season (a hat-trick against Chelsea at Stamford Bridge and a brace at the Etihad).

– The France international has also become the first player to score 40 or more goals in a single season for Real Madrid since Cristiano Ronaldo left the club in 2018.

– Vinicius Jr has now been directly involved in more Champions League goals this season (3 goals and 6 assists), than in his three previous campaigns in the competition combined (4 goals and 4 assists).

– Gabriel Jesus has now scored as many Champions League goals as Fernando Torres, Harry Kane and Gareth Bale (20 goals in 37 outings in the competition for the striker).

– Los Blancos have conceded 24% of their total goals in all competitions this season across five Champions League knockout games.