Everything you need to know about Man Utd target Malcolm Ebiowei 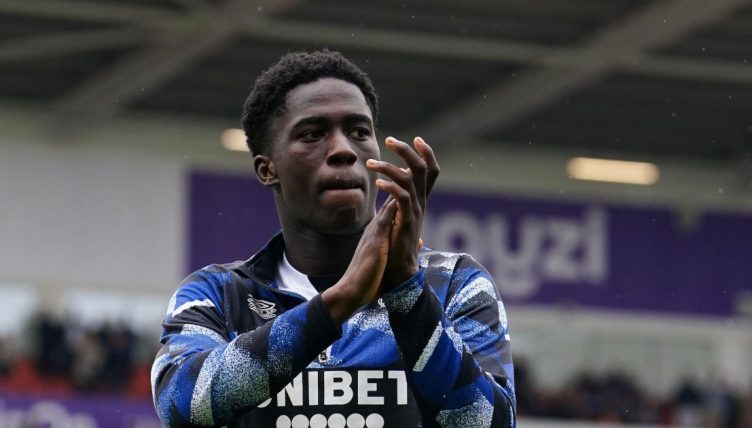 After impressing at Derby County, Malcolm Ebiowei could be about to become Erik ten Hag’s first signing at Manchester United.

According to journalist Fabrizio Romano, Ebiowei is expected to join a Premier League club and United and Crystal Palace are currently leading the race for his signature

But outside of those with a keen interest in the Championship, United and Palace fans might be unaware of who Ebiowei actually is. We’ve brought you the lowdown on the talented teenager.

Born in September 2003, Ebiowei joined Chelsea at the age of five after being spotted at their pre-academy development centre.

He moved to Arsenal in 2015 and starred for their Under-16s before making his Under-18s debut at the age of 15 in August 2019. But the Gunners reportedly had issues with his work ethic and didn’t offer him a scholarship with the club

After being released, Ebiowei had a trial with West Ham and was linked with Everton before heading to Rangers in February 2020. He spent his time at Ibrox playing with the Under-18s and B team and then returned to England with Derby in September 2021.

Signed with the view of being a Derby youth player, Ebiowei scored seven goals in seven Under-18 Premier League appearances, including a hat-trick in a 5-1 win over Leeds.

The 18-year-old also made five appearances for their Under-23s before Derby manager Wayne Rooney promoted him to the first team.

Ebiowei came off the bench to make his senior debut against Hull City in February 2022 and ended up with 16 Championship appearances during Derby’s heroic but ultimately failed attempt at survival.

During those matches, he notched up his first senior goal against Blackpool in the penultimate game of the season. He also assisted one in that 2-0 win, his second of two senior assists in 2021-22.

But he looks set to leave Derby when his contract expires at the end of June 2022. Alongside United, Crystal Palace, Monaco, RB Leipzig, Tottenham, Leeds and Newcastle have also been linked with him.

At international level, Ebiowei has previously played for the Netherlands Under-15s and England Under-16s but he is also eligible to play for Nigeria should he choose to.

Johnny-on-the-spot for his first senior goal! 🎯

And look at the smile on @malcolmebiowei's face 😁#DCFC pic.twitter.com/eKzhrnsXNk

Ebiowei is a versatile attacker. At youth level, he often played as an attacking midfielder, and he has also proven himself as a striker. But most of his senior appearances so far have seen him on the right flank as an attacking winger.

Left-footed, it’s unsurprising that Ebiowei enjoys cutting in onto his favoured side when on the ball. With Amad Diallo the only left-footed senior attacker on the club’s books at Old Trafford, that could partly explain the club’s interest.

Ebiowei is a technically gifted talent, with keen dribbling skills combined with a high level of close control. No Championship player completed more dribbles per 90 minutes than Ebiowei (4.5) in 2021-22.

The youngster has also demonstrated a penchant for set-pieces, his left-foot offering another option from free kicks. At an underage level, he demonstrated a brilliant goalscoring ability from dead-ball scenarios.

Towards the end of the season, he began taking indirect free-kicks for Derby and even assisted from one against Blackpool.

At times Ebiowei has shown a tendency to avoid using his weaker foot and would need to improve on his decision-making for senior Premier League football, but both are things he would no doubt be keen to improve on in the short-term.

– “He came in with a big smile and loved winning and hated losing,” Harry Watling, Ebiowei’s former youth coach at Chelsea, told The Athletic. “He had everything you want to see in a young player – he was not afraid to take people on and had an excellent left foot.”

– “It’s not just the weather and moving out from home he had to adapt to, but also the style of play,” Watling added when talking about Ebiowei’s move to Rangers.

“There is a big focus in London on flair and technique, but the further north you go, the more they value determination and application. The time he spent in Scotland, being removed from home comforts, elevated him to a new level as a player and person.

“In the early days, Malcolm would never use his size. He would play as if he didn’t have the physical attributes, hardly using his natural pace and power. If he beat a player, it was always because he has the trickery and the feints. Now he’s added physicality to his game; he does it with both.”

– “I thought he was excellent all game, the best player on the pitch,” Rooney said of the youngster after his Man of the Match performance against Coventry. “It was one of the best performances I have seen from a young player, consistently for 90 minutes, in a long time.

“He deserved that because he has worked extremely hard. His attitude is incredible, he wants to learn and he is an exciting young player. First of all, his attitude is very good.

“He has got an enormous amount of ability, he is brave, he will take the ball, he is not afraid to take players on, to get tackled, to make mistakes. So he has got a really bright future.”

– “I think this is one of the most exciting 90-minute performances from a teenager I’ve seen in the Championship this season and probably longer,” analyst George Elek said on Quest about Ebiowei’s Coventry performance.

“He is an incredibly confident player playing on the right-hand side, he looks like an absolute talent.”

– “I think he has been a breath of fresh air,” Derby coach Justin Walker said in April 2022. “You can see how much the fans have warmed to him, he gets people out of their seats. He has got that little bit of X-factor if you like, that creativity we have lacked at times in the final third.

“The only thing probably missing from his game is a goal, but I am sure that will come. He has got so much talent, and more importantly his attitude and his character.”