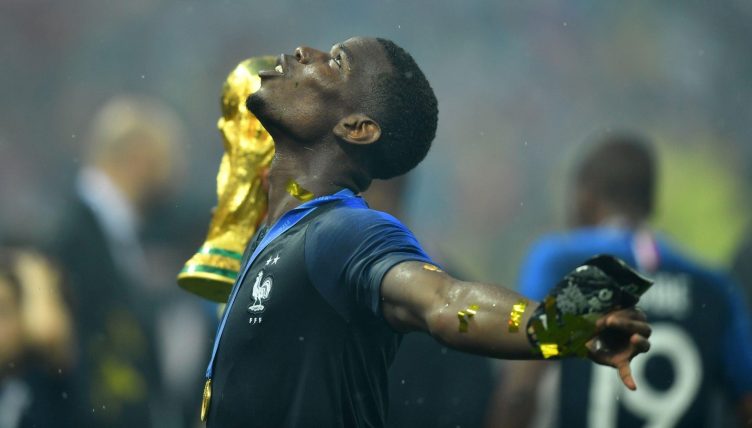 The 2022 World Cup is guaranteed to end with a Manchester United player lifting the trophy, as Lisandro Martinez’s Argentina take on Raphael Varane’s France at the Lusail Stadium in Qatar.

Stars of Erik ten Hag’s squad – including the likes of Casemiro, Antony and Harry Maguire – have departed Doha disappointed, having failed to get their hands on the most coveted trophy of them all. At least Varane or Martinez will return to Old Trafford this Christmas with a spring in their step.

Plenty of World Cup-winning legends have won United’s famous shirt, from Fabian Barthez to Juan Mata to Bastian Schweinsteiger in the Premier League era. But – surprisingly enough – in the storied history of Manchester United, only four players have ever won the World Cup whilst representing the club…

One of the most legendary figures in the history of Manchester United, Charlton miraculously survived the Munich air disaster and went on to enjoy a wonderfully successful career for club and country afterwards.

Charlton also, of course, lifted the World Cup in 1966, featuring alongside his brother Jack, Geoff Hurst, and captain Bobby Moore as England defeated Germany 4-2 in the Wembley final.

Charlton wasn’t the only United player selected by Alf Ramsey to take on Germany in the 1966 final. The famously tough-tackling Stiles, renowned as one of the hardest players in English football history, featured deeper in midfield.

The Manchester-born warrior is another of United’s all-time greats, having been a key part of the side for over a decade. He represented the club between 1960 and 1971, a period in which the Red Devils won two league titles, the FA Cup and European Cup.

Just as he had two years prior with the Three Lions, Stiles slotted in alongside Charlton in midfield as United won the European Cup for the first time in 1968. They beat Benfica 4-1 at Wembley in the final.

🇾🇪 Just read a book about Bobby , where he said "when I got the ball from Nobby I knew I had to do something good with it , because he had worked so hard to get it in the first place "
what sentiment ❤️
Nobby Stiles and Bobby Charlton 🇾🇪 pic.twitter.com/l8xEPVCoiD

A heroic figure in the history of Lancashire football, Connelly was born and died in the county and represented Burnley, United, Blackburn and Bury, scoring 180 league goals in a career that stretched from 1956 to 1973.

In 2018, Pogba became the first Manchester United player to lift the World Cup since 1966.

The club’s all-time record signing had won the League Cup and Europa League under Jose Mourinho during his debut season at Old Trafford, while his second season saw United finish runners-up in the Premier League and FA Cup.

The Frenchman’s last game for United before heading off to the World Cup was a disappointing 1-0 defeat to Chelsea in the FA Cup final, but a series of excellent performances in Russia ensured that Les Bleus wouldn’t be suffering the same disappointment that summer.

Pogba helped form a wonderfully-balanced midfield trio with Blaise Matuidi and N’Golo Kante and scored a peach of a goal in the final at Moscow’s Luzhniki Stadium as France beat Croatia 4-2.

READ NEXT: 15 of the best quotes on Sir Bobby Charlton: ‘He epitomises Man Utd’