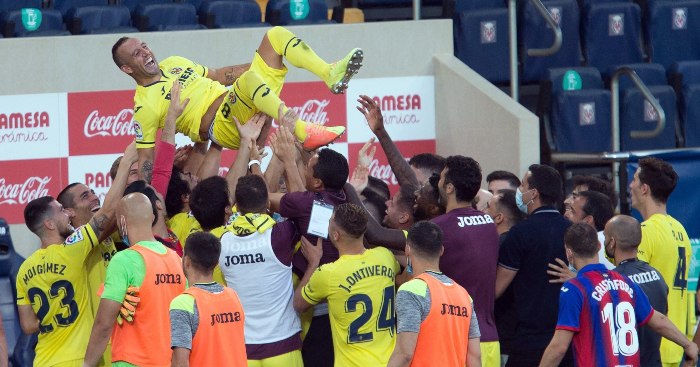 The La Liga season ended with Real Madrid lifting the title for the first time in three years and Barcelona facing an existential crisis, but both clubs had players in Marca’s best and worst teams of the season.

Elsewhere, Valencia seem to be enveloped in near-constant turmoil, while Granada have qualified for European football for the first time in their history.

We’ve taken a closer look at Marca’s best and worst XIs of the 2019-20 La Liga campaign.

Thibaut Courtois may have had his critics in his first season at Real Madrid but has certainly won fans over in his second, keeping more clean sheets than Jan Oblak, despite playing fewer games than the freakishly good Atletico stopper.

Former Porto defender Felipe was one of Atletico Madrid’s least hyped signings last summer but has helped fill the void left by Diego Godin, while Diego Carlos’ form for Sevilla has seen him (probably spuriously) linked with a move to Liverpool.

Any player who relishes the chance for some absolute shithousery when presented the chance to win the title deserves the nod: Sergio Ramos, of course, is that man.

In midfield, Casemiro continues to protect Real’s back four but has also come up with winning goals on three occasions in 2019-20. Sevilla’s Lucas Ocompas has bagged 14 goals in his first season since joining from Marseille and even played a starring role as a stand-in goalkeeper recently.

🧤: 101' Lucas Ocampos goes in nets and makes this match winning save!

Ocampos ensured it finished 1-0 and picked up MOTM too! 👏👏#LaLiga #BackToWin pic.twitter.com/dh3ZSlBzeJ

This season has proved Santi Cazorla’s last at Villarreal as he makes the switch to Qatari outfit Al Sadd, where he will play under former Spain team-mate Xavi (perhaps Santi might win their lottery too). The 35-year-old has provided 11 goals and nine assists this term and Sid Lowe recently suggested in The Guardian: “Cazorla has been arguably the outstanding midfielder this season.”

Martin Odegaard, meanwhile, has finally started to live up to his potential on loan at Real Sociedad, where he is set to spend a second season on loan from Real Madrid.

In the forward line, Lionel Messi continues to break records, despite Barcelona’s struggles, and Karim Benzema remains Real Madrid’s great survivor. The duo were the only players to score more than Gerard Moreno, who notched 18 times for Villarreal.

Valencia spent €35million on signing Jasper Cillessen from Barcelona last summer, only to see the goalkeeper lose his place as No.1 in recent weeks. Valencia are expecting to conduct something of a fire sale this summer, with Cillessen linked with a return to Ajax.

Thierry Correia was another new signing at the Mestalla, joining Valencia in a €12million deal from Sporting Lisbon, only to play just four times in La Liga. Fernando Calero was part of a spending spree Espanyol’s new Chinese owners hoped would propel the side to the Champions League. Instead, they finished bottom of the table and have been relegated for the first time in 27 years.

Completing the back three, Junior Firpo has the dubious honour of being among the €954million Barcelona have spunked since 2015 and has been linked with a move to Serie A after just one season at the Camp Nou.

In midfield, Rony Lopes has made just two starts in La Liga after joining Sevilla from Monaco as part of the deal that saw Wissam Ben Yedder move in the opposite direction, Matias Vargas has been a part of the Espanyol shitshow and Denis Suarez continues to stake his claim for the most tragic footballer in Europe.

On the left wing, plenty of fans are unhappy Marca have opted for Atletico Madrid’s €126million Joao Felix (six goals, one assist) ahead of Real Madrid’s €150million Eden Hazard (one goal, three assists), who has himself described 2019-20 as “the worst season of my career individually”. We still love them both.

In attack, it has taken until July before Antoine Griezmann has shown signs of being able to efficiently link up with Lionel Messi and Luis Suarez at Barcelona, while Luka Jovic joined Real Madrid €60million only to be more notable for scoring with Serbian model Sofija Milosevic rather than his two goals in La Liga.

Real Betis’ Borja Iglesias did manage to score more goals than Jovic, although they were probably expecting more than three after paying €28million for the former Espanyol striker. Indeed, he scored as many goals in 2019-20 for Espanyol as he did for Betis, despite playing just three times before making the move in August.