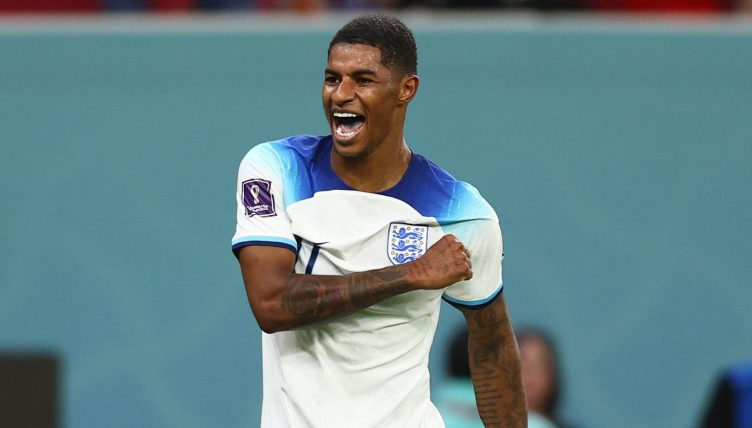 Marcus Rashford is back to his very best for both club and country. He could still have a massive role to play for England at the World Cup.

It’s no secret that last season was especially disappointing for the Manchester United forward. He only scored five goals across all competitions, which was his lowest-ever tally since breaking through at United.

The 25-year-old has been reborn this season though and we’ve loved to see it.

“I have to say, he’s really been impressive since he came back in with us. He could have had a hat-trick, couldn’t he? And the free kick is what he’s capable of, it’s an incredible strike really.

“In moments I thought both Foden and Rash were quiet in the first half, we decided to switch wings, and I thought that might allow them to go on the outside and also the chance to come in and they responded really well, so for both to get the goals is great.”

Rashford himself was in good spirits following his brace against Wales. “We were a little bit disappointed as a team after the last game against the USA,” explained the Manchester United forward.

“I thought we could have played a lot better and the only way to bounce back from that is to have a good performance in your next game and I think we did that.”

On his free-kick opener, Rashford added: “I fancied one in the first half but the one in the second half was in a better position.

“And from there, it’s just about being calm and trying to execute what you practice in training. They don’t go in often but I’m pleased that it went in today.”

We’ve gathered 11 stats which highlight just how good Rashford has actually been of late.

– He is the joint top goalscorer of the 2022 World Cup along with Kylian Mbappe, Cody Gakpo and Enner Valencia. Each player has scored three goals so far.

– The England forward is averaging a goal every 36 minutes at the World Cup which is the best ratio of anyone to have featured in more than one match.

– He has now scored three times as many World Cup goals as Wayne Rooney.

– Rashford is the first Manchester United player to score three goals at a major tournament for England since Bobby Charlton at the 1966 World Cup.

– His free-kick against Wales was the first free-kick scored at the tournament, and first World Cup free-kick since Kieran Trippier against Croatia in the 2018 semi-final.

Marcus Rashford with a gorgeous free-kick to give England the lead! 🔥#BBCWorldCup #BBCFootball pic.twitter.com/nqovEb64kv

– The 25-year-old is averaging five shots on target per 90 which is more than any player at the World Cup.

– He has completed more successful dribbles (18) than any other Manchester United player this season.

– Rashford is United’s top goalscorer in this campaign with eight goals in all competitions.

– In the Premier League, Rashford has taken more shots than any of his Red Devils team-mates with 32 throughout 2022-23 so far.

READ MORE: Where are they now? The 10 youngest players from 2018 World Cup