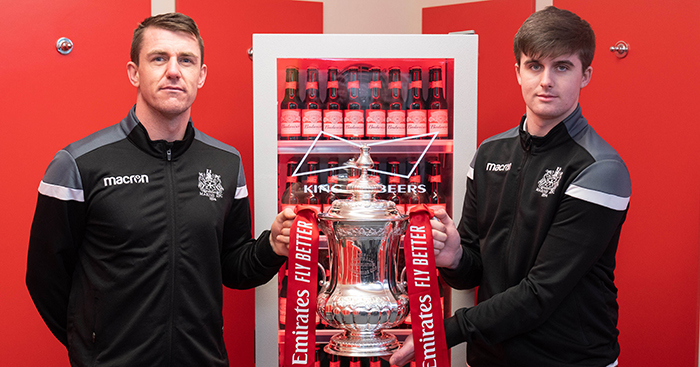 Marine FC goalkeeper Bayleigh Passant hit the headlines in November when he did a beer run still in his kit after the non-league club made the FA Cup third round – but his team-mates won’t have to wait to celebrate if they can pull off a giant-killing against Tottenham on Sunday.

Marine FC became only the second team from the eighth tier to ever reach the third round of the FA Cup when they beat sixth-tier Havant & Waterlooville after extra time, and on Sunday they will host a team 161 places above them in the pyramid, the biggest gap in history between two teams to meet at this stage of the competition.

Passant made headlines around the world when he headed to the shop for celebratory beers after the win against Havant, on the day he turned 20, but Budweiser have made sure he won’t need to leave the dressing room to get them in if Marine can pull off the shock of all time against Jose Mourinho’s Spurs.

Officially presented, remotely, by FA Cup legend John Barnes, Marine have received their own beer fridge for the dressing room, fully stocked with Budweiser…just in case.

And with the historic match being played behind closed doors, Budweiser is also providing loyal fans with free beers to enjoy while watching from home.

Furthermore, with the Northern Premier League now suspended until at least mid-February, the club will be supplied with Budweiser for the rest of the year, once the season resumes, so they can eventually celebrate their extraordinary cup run with their fans.

“But we’re not just there to make up the numbers. This is a once in a lifetime opportunity and we’re determined to make the most of it and give 100% to try and get a result. We owe it to everyone cheering us on from home, especially as our league campaign has been so disrupted this year.

“Even if the odds of pulling off a result are a million to one, we have to remember – we could be the one.

“It’s a great gesture by Budweiser – the fridge is a fine addition to the changing room for the lads and it’s also great for the fans to be able to enjoy some beers, whatever the result.”

Marine FC will have a High School teacher leading them out against Spurs on Sunday. This is what the FA Cup is all about.

Having @BudweiserUK / @budfootball stick a beer fridge in your dressing room just in case you win is pretty decent, too! 🍻 pic.twitter.com/amG246hnUZ

Amar Singh, senior brand manager, Budweiser, said: “We wanted to honour Marine’s achievements to date. They have well and truly earned their right to take on Tottenham.

“The ambition, passion and determination shown by everyone at this club, in the face of so many challenges this season, should be as much an inspiration to fans across the country as any number of trophies won or records broken by more well-known players.

“Like many of us, I hope Marine’s adventure doesn’t stop here. If they step up and take the chances that come their way, who knows how far they can go?” 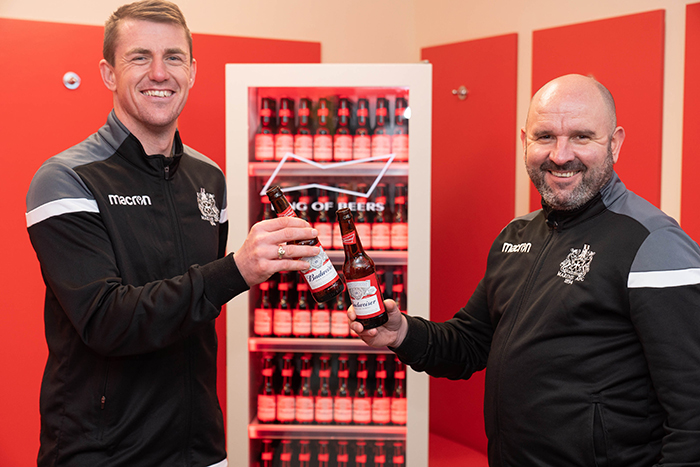 Marine have been helped in their preparations for the match with video analysis from Liverpool FC. Barnes, a two-time FA Cup winner with the Reds, knows there is always a chance of an upset this weekend, having been part of the 1988 team beaten by Wimbledon

“With the country in another lockdown, we could all benefit from some of the magic of the FA Cup to lift our spirits. And this is really and truly David versus Goliath. But if Marine can start well and hold Spurs, doubts can set in and who knows what might happen – all it takes is one stroke of luck. They just have to stay focused and organised.

“The possibility that any team can win the  FA Cup is what makes this competition so special. The big teams’ disrupted schedules mean the chance of an upset is greater than ever. Marine probably won’t go quite all the way, but for one side playing this weekend the opportunity is there for the taking.

“But regardless of what happens on Sunday, to quote an anthem from another part of Merseyside, Marine will never walk to the shops to buy beers alone again.”