‘You’re having a bloody laugh’: 11 of the funniest Mark Goldbridge clips 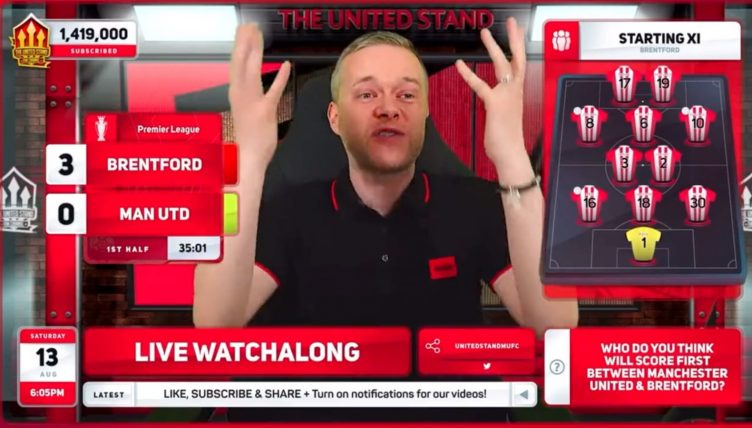 Mark Goldbridge is virtually a national treasure by this point with his Manchester United rants and raves going viral all the time.

These days he doesn’t exclusively keep it to football either as he’ll regularly go off on all sorts of tangents about different topics and opinions. His Alan Partridge-esque rants always manage to keep us entertained and laughing.

We’ve gone through the archives and dug out 11 of his funniest moments from the years gone by.

You’re having a laugh

United’s start to the 2022-23 campaign had quite the toll on Goldbridge. It’s fair to say that Erik ten Hag didn’t get off to the best of starts at Old Trafford.

When Brentford make it 4-0, he’s had enough.

We’ve all been here before. Goldbridge gives it the big one as United get back in the game, only for them to instantly concede.

The comedic timing is impeccable.

The sheer length of time he left between that analogy and the final 3 words.

Everyone is guilty of having a bad footballing take from now and again but this one really takes the biscuit. Donny van de Beek a more complete player than Frank Lampard? We’re not sure about that one.

There’s something oddly satisfying about watching a fully grown man get baited on a kids game. His face is priceless once he realises what has happened.

This one is an all-time classic.

You’ll never be able to guess what this innocent conversation about green peppers leads to.

That’s not a goal

Nothing will ever beat this all-time classic. The perfect blend of chaos, instant karma and rage – peak Goldbridge.

How’s he got that gig?

Jermaine Jenas is everywhere nowadays, from the One Show to presenting the World Cup draw in Qatar. It’s fair to say that Goldbridge wasn’t a fan.

Losing 4-1 in the Champions League on FIFA is bad enough without having Antoine Griezmann of all people rubbing it in with a mocking celebration.

Definitely the best Mark Goldbridge clip there is 😂 pic.twitter.com/RjeaK66EQg

Ah, childhood innocence. Even on foreign shores, Goldbridge isn’t far away from the haters.

READ NEXT: When a Man Utd fan pulled off ‘the best football sting of all time’

TRY A QUIZ: Can you name Man Utd’s top 30 goalscorers in PL history?