Everything you need to know about new Arsenal signing Marquinhos 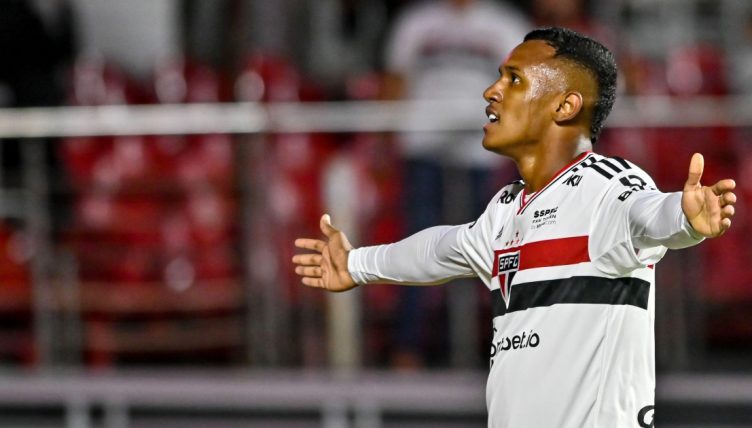 Arsenal are reportedly close to signing their first outfield player this summer in the form of Marquinhos from Sao Paulo – and we’ve collected everything you need to know about the young forward.

The £3million deal, yet to be announced, will see the 19-year-old arrive in England in time for pre-season after Arsenal fended off competition from elsewhere.

And here is all that Gunners fans need to know about their latest acquisition.

Born in Brazil in April 2003, Marquinhos joined boyhood club Sao Paulo and worked his way through their academy.

He impressed manager Hernan Crespo and made his first-team debut at the age of 18 in July 2021, coming on as a second-half substitute in a 1-0 win over EC Bahia.

Crespo then surprised everyone by handing Marquinhos his first start for the club in the Copa Libertadores last-16 second leg against Racing Club.

The Brazil Under-17 international repaid his manager’s faith by registering a goal and an assist in a 3-1 win, becoming the youngest player to score for Sao Paulo in the Copa Libertadores.

He was also a similar age to Carlos Tevez and Alexis Sanchez when they scored their first goal in the prestigious competition.

Marquinhos missed their quarter-final defeat to Palmeiras due to an injury problem but finished his debut season with 24 appearances in all competitions.

He’s made another 15 appearances in 2022 and recently scored his first goal in the Copa Sudamericana, South America‘s secondary club football tournament.

Overall, the 19-year-old has registered four goals and three assists in 39 first-team appearances, but he started on the bench for 30 of those games.

Despite Marquinhos signing a five-year deal with Sao Paulo in 2019, FIFA have refused to accept it as he was just 16 when he put pen to paper. The contract is subsequently valid for just three years and Marquinhos has rejected the offer of a new contract.

Wolves and Atletico Madrid reportedly showed an interest in the teenager but Arsenal have won the race for his signature.

He said: “We have a spectacular relationship with Edu Gaspar, who told us that he knew that Marquinhos could leave for free, but that he was still going to look for funds to pay for São Paulo, because he wants to have a relationship with São Paulo.

“He wants to be closer to eventually be able to bring younger players from Sao Paulo to Arsenal.”

While Arsenal hope Marquinhos will help fire them to Premier League and Champions League glory in the future, it has been suggested that Edu could loan out the youngster for the sake of getting first-team experience in Europe.

Unlike his namesake at PSG, Marquinhos is a left-footed winger. He is comfortable on either flank but his preferred role is on the right-wing so he can cut inside on his favoured foot.

The 19-year-old can also play through the centre and is renowned for his impressive pace and technical ability.

Bukayo Saka has nailed down the right-wing spot at the Emirates but Nicolas Pepe could be allowed to leave the club in the summer.

According to reports, Marquinhos will probably be sent out on loan for the 2022-23 season and a La Liga move is likeliest. This will help him get to grips with European football before potentially staking a first-team claim at Arsenal.

– “Just talking about Marquinhos, he made his debut a week ago and was the protagonist,” Crespo said after the win over Racing Club. “It’s a product made in Cotia and when you see it’s a great satisfaction. We need talent that can keep up.

“We always look at situations and work with Cotia’s group. That’s why Wellington is playing, Marquinhos and Talles. We believe that young people are the future of São Paulo

– “His performance gives great satisfaction for the whole club,” Crespo added. “He is a product of our youth program and that makes us happy. But we need the older guys to accompany him.

“The players know perfectly well that … I don’t look at their ID card. I don’t care if they’re 40 or 18. If I think they deserve to play, they will be in the team.”

– “This is absurd. This is absurd,” former Brazil international and World Cup winner Vampeta said after hearing about Marquinhos’ move to Arsenal.

“Marquinhos’ business. They’re going to lose Marquinhos to Arsenal for €3million. I don’t know if you remember that I used to say I watched Audax’s academy games, Marquinhos in the Under-15… he used to already make the difference.

“I said here on the show, ‘There’s an Under-15 at Sao Paulo, Marquinhos’… Now he’s going to leave on a silver platter.”

– “His goal record isn’t great, according to the people that watch and have seen a lot more of him than I have,” journalist Charles Watts said on his YouTube channel.

“His finishing needs improving. But he’s 19 – Arsenal see him [as] one for the future.”