How Martin Dubravka compares with David de Gea in the league 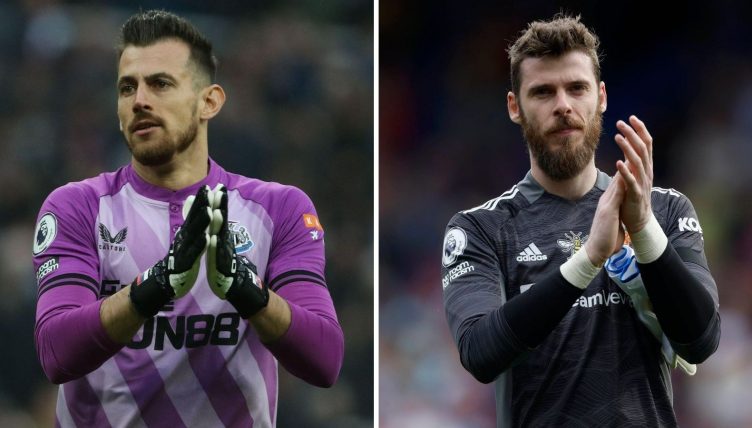 Manchester United are about to sign goalkeeper Martin Dubravka on loan from Newcastle United – but how does he compare with current No.1 David de Gea?

After Edwin van der Sar decided to hang up his gloves at the end of the 2010-11 season, United signed De Gea from Atletico Madrid.

The Spain international initially struggled with the physicality of the Premier League and was often targeted by strikers.

He managed to turn things around and developed into one of the best goalkeepers in the world, earning a place in the FIFA FIFPro World11 in 2018.

De Gea has also won the Sir Matt Busby Player of the Year four times and has been named in the PFA Team of the Year on five occassions.

But the 31-year-old has recently seen mistakes creep back into his game and there are question marks over his ability to adapt to Erik ten Hag’s style of play.

Ten Hag was filmed screaming at the goalkeeper during a pre-season game and United’s No.1 has had a difficult start to 2022-23.

“I think I cost my team three points today,” De Gea told Sky Sports after the 4-0 defeat to Brentford. “It was a poor performance from myself. After the first mistake and then the second, it was very tough to be playing and it was a horrible day.

“Of course, we should react better but the moment we are living now is tough, every time we concede a goal. I should’ve saved the first shot and probably the result would be different.”

Ten Hag wants another goalkeeper to challenge De Gea and has identified Dubravka, who has spent the last four and a half years at Newcastle.

The Slovakia international won their Player of the Year award in 2019-20 but has recently been usurped by new signing Nick Pope.

He’s now moving to Old Trafford on a season-long loan deal and United have the option to make the move permanent for £5million.

“From my perspective, I’m sad if Martin does leave, I’ll be sad to see him go,” Eddie Howe said. “Certainly it’s not something we wanted as a football club but we understand that there’s always two sides to every story.”

we finally have a keeper that isn't glued to his line 🤌 welcome dubravkapic.twitter.com/4KrZxJ8Mq4