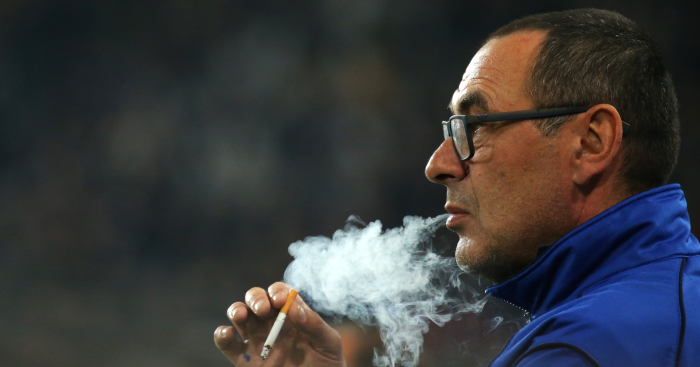 Former Chelsea boss Maurizio Sarri is famed not only for his style of football but for his tendency to spark up a cigarette in the middle of a match.

Images of the boss smoking during games while in charge of Napoli regularly circulated, while his nicotine chewing habits in England often doing the rounds on social media.

We’ve taken a look at Sarri’s recent history to see how his smoking habits have evolved over the years.

Sarri was seen puffing away on the touchline for a good number of years at Empoli and Napoli.

He wasn’t the first to do so. Fellow Italian bosses Gianluca Vialli and Walter Mazzarri – formerly of Watford – are known to enjoy a mid-game smoke, while the likes of Sam Allardyce and Arsene Wenger have also lit up in the dugout in years gone by.

Expect to see more of this next season… Sarri walking out of the Stamford Bridge tunnel with his personal bodyguards and smoking a cigarette 😂😂 pic.twitter.com/3eZM84P1PP

After a number of years where Sarri and his countrymen had been seen smoking on the touchline during games, the practice was eventually banned.

Napoli immediately built Sarri his own smoking area inside the ground – though Italy’s ban on smoking in public buildings had been existent two years longer than the UK’s, this did not include inside stadia.

But not in the stands

Sarri was sent off from the touchline in a contest with AC Milan in 2016 and used it as an excellent opportunity to enjoy the game alongside his other great passion.

After taking up his seat in the stands, he sparked up in the latter stages of the second half, as his side drew 1-1 with the Rossoneri.

Maurizio Sarri smoking in the stands after being sent off… #NapoliMilan pic.twitter.com/Shbzygq41S

Sarri reportedly travelled to an away match at Bologna – 500km north of Naples – on the train as opposed to flying with the rest of his team.

Not only does he have a reported fear of flying, but he prefers to travel on the train as it allows him to have a mid-journey smoke or two.

After learning of Sarri’s particular habits and a request from his club, RB Leipzig constructed a separate room – even featuring a fresh concrete wall – inside the Napoli changing room so Sarri could enjoy a cigarette inside the stadium.

It sure helped, as Napoli won the match 2-0, though a 3-1 defeat at home in the first leg meant Leipzig progressed to the Europa League last 16 on away goals.

“Sarri is a passionate smoker, that’s really incredible,” said captain Marek Hamsik. “I have never seen anyone who smokes so much. Thank God he has to hold back during games!”

“When I finish playing I’ll never be a coach, it’s too much stress,” he said when asked about his future last year.

“Is Sarri stressed? I’d say so! Five packs of cigarettes a day, what can you say?!”

Italian rapper Nasta dedicated a song to the manager in March, entitled ‘Come Maurizio Sarri’ (Just like Maurizio Sarri), which earned him a meeting with the then-Napoli boss.

His momento coming away from the meeting was more than a tad unusual as the artist asked Sarri to sign a cigarette for him.

“It’s like having a signed ball from Maradona,” he said.

The Rapper Nasta after meeting with Sarri and having him sign a cigarette: "It's a memorabilia, it's like having a signed ball from Maradona, I'll carry it with me for my whole life". pic.twitter.com/Z5ElwC2B9p

As Chelsea’s interest in Sarri began to build, reports grew that club officials had been tasked with locating a room inside the ground in which Sarri could enjoy his habit.

The Daily Mirror first reported that a smoking room would be built for the inbound manager, but it seems those hopes are still yet to be realised.

And then, it was The Sun’s turn to comment on the matter, as they shared owner Roman Abramovich’s say.

They reported that Abramovich wanted Sarri to adopt a “British attitude” in the job, which included quitting smoking and wearing a suit on the touchline. He’s yet to wear a suit…

Picking up the baton

Keen not to let his new supporters down after the departure of one of their greatest managers of recent years, Carlo Ancelotti wasn’t taking any chances.

He was pictured prior to a pre-season friendly against Carpi having a quick cigarette alongside members of his backroom staff.

Carlo Ancelotti having a smoke in his tracksuit before #Napoli's friendly with #Carpi, presumably to reassure fans who still miss Maurizio Sarri… https://t.co/NI7OcGD6mu

During his first Premier League game in charge – Chelsea’s 3-0 win away at Huddersfield – Sarri ignored the typical methods of nicotine replacement to go with his own.

He wasn’t wearing patches or chewing gum but was incredibly spotted chewing away on cigarette butts on the touchline.

And it’s not even the first time he’s done it.

“If I smoked the filter as well, then I’d really have a problem,” he said in November 2017 after being caught chewing a butt on camera during a Napoli victory over AC Milan.

Maurizio Sarri chewing a cigarette on the bench because you can't smoke in English football 😂#CFC #PremierLeague #TrapaDrive #ChelseaFC pic.twitter.com/mGIoeLg4RV

A packet to hand

After being seen chewing cigarettes during the season opener, Sarri caused another social media stir as he was spotted with a packet in his hand during the victory over Arsenal in his second Premier League game in charge.

Sarri holding a pack of fags on the bench 😂 #Chelsea #PremierLeague pic.twitter.com/685fQ2UBM5

In the pulsating 3-2 victory over Arsenal, Sarri watched his side struggle their way to half-time as Arsenal could have scored a good number more, and he admitted it was perfect time for a cigarette.

That prompted press conference questioning regarding his smoking habits, and he revealed he is officially giving up – during the game at least.

“I will smoke in the evening, not during the match,” he explained. “I am going to stop. Just for one or two years, then I will start again.”

Journalists then asked if he felt the need for a cigarette at half-time, immediately after Arsenal’s period of dominance.

“No, no, I just needed the first half to end! I needed half-time,” he said.

A 3-1 defeat at Tottenham, Chelsea’s first loss in the Premier League in 2018-19, left Sarri craving a niccy rush – even at half-time.

Sarri finally has to put a cigarette in his mouth in PL. pic.twitter.com/TF5UxzNijA

Sarri may have lasted only one season at Stamford Bridge, and his start to life at Juventus may have been scuppered by contracting pneumonia, but winners never quit. Literally.

Juventus 'irritated' by Maurizio Sarri after he 'refused to stop smoking' even while struggling with pneumonia https://t.co/SZlZXWIHVx

18 quotes to explain Maurizio Sarri’s philosophy: ‘His football is a joy’