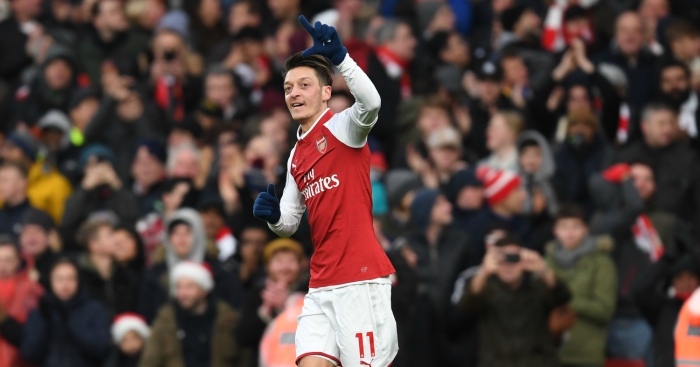 Mesut Özil’s wonder goal at the weekend will have frustrated some Arsenal fans as much as it delighted them. Why can’t he do that more often? But while there may be an argument to say he should score more often, there really should be no argument about the strength of his overall contribution for the Gunners.

Nobody has ever doubted Özil’s ability to produce moments of magic like Saturday’s against Newcastle United. His critics simply argue he does not produce them often enough – and not nearly enough in the games that truly matter.

Even Arsene Wenger has said Özil ought to score more goals. After his third of the season at the weekend, Wenger admitted he was surprised the German midfielder even took on the shot.

“It’s important for him that he takes the risk to do what he did,” the Arsenal boss said.

“He’s a guy who 99% of the time in these positions controls the ball and gives it to somebody else.”

Ozil lining this one up for days 😱 pic.twitter.com/jz0XMp60ke

However, despite any frustrations Wenger may have about Özil, he would love to keep the former Real Madrid man beyond the season when his contract is due to expire. After all, he bought Özil to open up defences with key passes and to create chances in the final third – and Özil does that with aplomb.

So why, then, the relentless flow of criticism? Why is it that so many people focus on what he doesn’t do instead of simply enjoying what he does do. Why is it they can’t appreciate his wonderful passing or the fact he is even capable of scoring goals like Saturday’s, even if he does only do it now and again?

1) Özil’s languid style is mistaken for lazy when it is simply smooth, graceful. He’s a Rudolf Nureyev, a Fred Astaire with no wasted movement.

Furthermore, it was revealed at the end of last season Özil had covered an average of 9.97km per match in the Premier League, the third most of all Arsenal players and 1.45km more than the supposed non-stop, 90-minute Duracell Bunny that is Alexis Sanchez.

2) Özil is measured using inappropriate performance metrics. Holding him accountable for tackles, interceptions and clearances is simply using the wrong measuring stick, yet it continues to be done.

3) Many seem to forget that many of Özil’s appropriate performance measures – the number of completed passes, key passes, assists and chances created – are critically reliant upon the performance of others, in their ability to find space, to control his passes, to convert the chances he lays on.

For Özil to be successful, his supporting cast must be successful. So, when team-mates are wasteful, Özil’s numbers suffer. On Saturday alone he created eight chances. Only Kevin De Bruyne has created more in a single game this season in the Premier League, but whereas Manchester City have been unbelievably clinical this season, Arsenal are renowned for being wasteful. 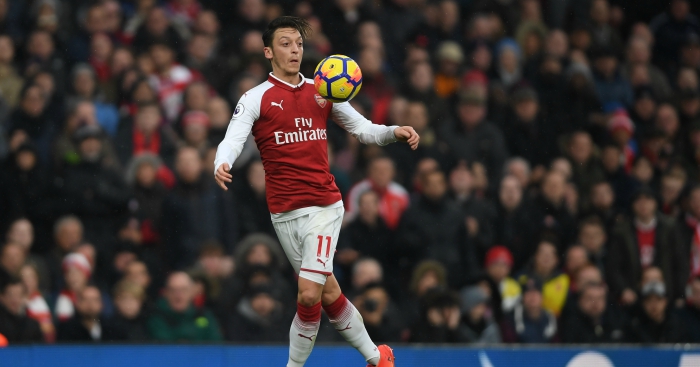 But enough of the conjecture. Let’s focus on a few key metrics to assess how Özil has fared over his five seasons with the Gunners. Have his performances withered as some in the media have suggested, or are these criticisms unfounded?

It makes sense to first look at Özil’s availability. After all, any player’s value must be closely linked to their amount of time on the pitch. So how has Özil held up during his five seasons at Arsenal? 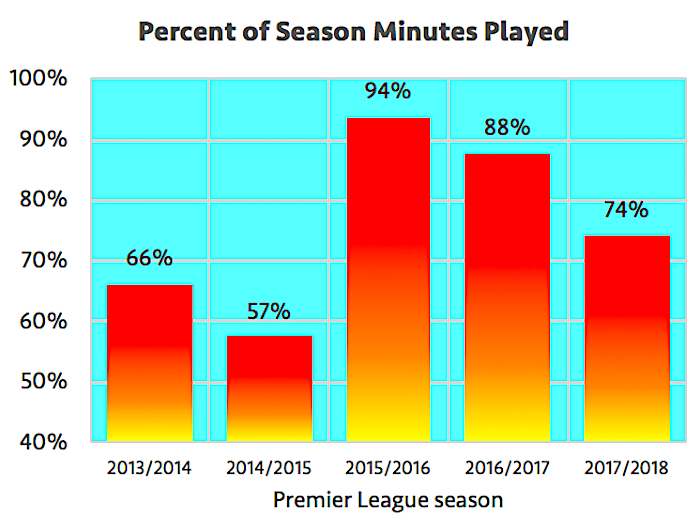 Well, Özil suffered a significant number of injuries during his first two seasons at Arsenal, missing 24 matches. However, he has proven much more durable over the past two seasons, missing only seven matches.

He was injured on international duty prior to the start of the current season and missed five matches early on, but he has played regularly since then.

Another important measure for a player tasked with controlling the flow of the match is the number of touches he has during the 90 minutes. Has Özil’s influence changed over the past five seasons? 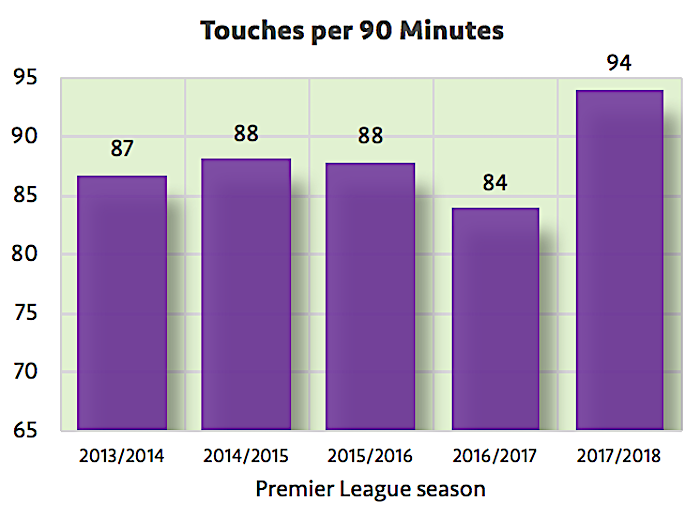 The simple answer is no, it hasn’t changed. There was a slight decrease in Özil’s touches per 90 minutes last season, but he has remained at approximately the same level ever since he joined Arsenal.

He is having an average of 10 more touches per 90 minutes so far this season than last, but Arsenal have had almost 3% more possession as a team than in 2016-17 which may explain the rise.

One of the most important measures for Özil are his distribution metrics, especially his successful pass completions, most of which occur in the attacking half and final third. 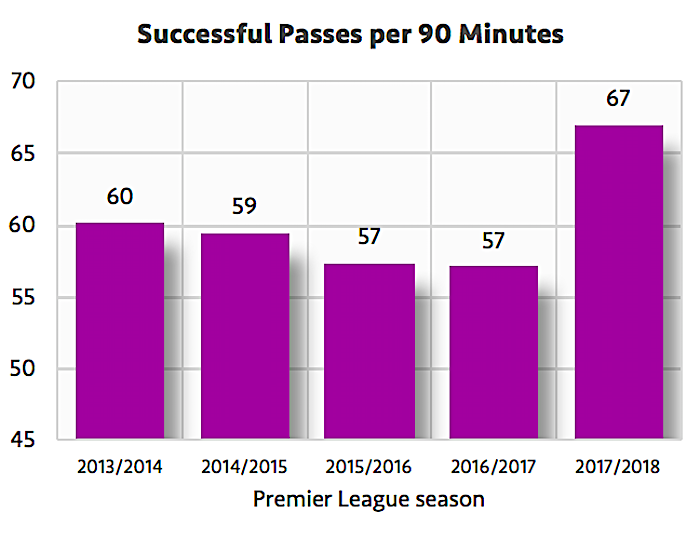 Özil has consistency averaged between 57 to 60 completed passes per 90 minutes until the current campaign where it has improved by around 15%.

Again, this can be partly explained by Arsenal’s greater possession, but what is certain is that Özil hasn’t suffered any kind of drop.

For strikers, the number of goals scored is the gold standard. For a No.10, assists and key passes are paramount. 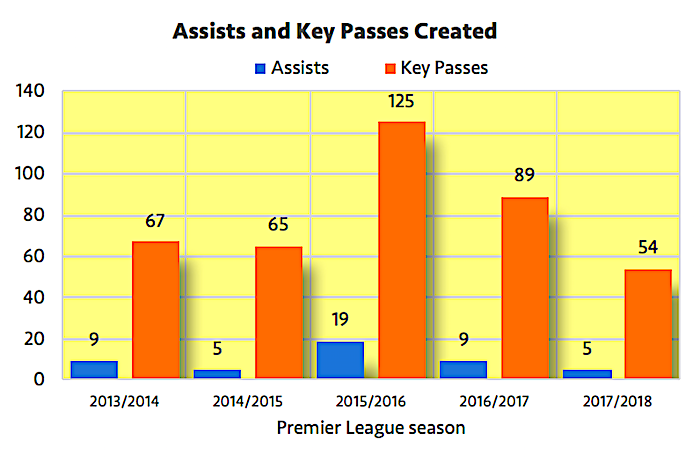 Özil’s 19 assists in 2015-16 was the second best tally in Premier League history, behind only Thierry Henry’s 20 for Arsenal in 2002-2003. And perhaps part of the criticism of him since then stems from using that extraordinary 2015-16 as a baseline of comparison for his future efforts.

That’s clearly an unfair frame of reference given we’re talking about near-Premier League record numbers but, as mentioned earlier, the amount of assists a player racks up depends on how clinical their team-mates are. And though Özil’s tally of nine assists last season was only the sixth most in the league, only one player (Christian Eriksen) produced more key passes per game. 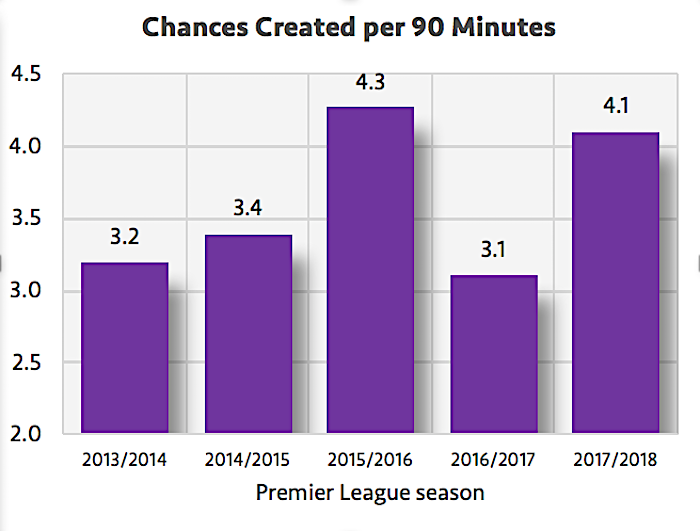 This season, while Özil has only five assists to his name in the Premier League, three less than Kevin De Bruyne, David Silva and Leroy Sane, he has created 48 chances from open play alone, 10 more than his nearest competitor, Sanchez, and 15 more than De Bruyne and Silva. And that is despite playing significantly fewer minutes than the two Manchester City midfielders.

De Bruyne has created two more chances than Özil when taking set pieces into consideration, but the German’s overall record of 4.1 created per 90 minutes is still comfortably superior to that of De Bruyne (3.3) or anyone else to have played at least 100 minutes in the Premier League this season.

The relevant metrics show that Özil’s performance contributions have not depreciated in the slightest during his time with Arsenal. On the contrary, several key factors have improved.

He is often singled out for blame, but he’s a victim of circumstance – even when he’s creating chances at a rate way in excess of anyone else in the league, his team-mates aren’t making the most of it.

Özil may well have grown as tired of the criticism as he has Arsenal’s failure to get any closer to winning the big trophies over the past five years. If he does decide to leave Emirates Stadium, you could understand why.

And given some of his numbers, if he does want to move on, he shouldn’t be short of suitors.