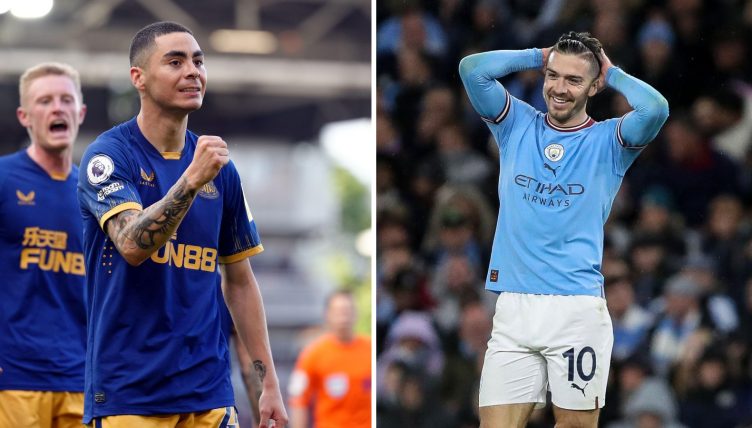 Newcastle United Miguel Almiron has taken some flak during his time as a Premier League footballer – particularly from Manchester City’s Jack Grealish – but he’s silencing his doubters this season.

It’s impossible to argue against the Paraguay international’s endeavour. He’s one of the hardest-working players around, forever chasing down defenders and pressing for the collective cause.

But Almiron has often struggled to add end product during his time in the English game. He’d signed for a club-record £21million from Atlanta United back in January 2019, having hit double figures for both goals and assists in his final season in MLS.

He notched just nine goals and three assists across his first two and a half seasons in the English top flight. In fact, during the entirety of last season he registered just a single goal and no assists in the league for Eddie Howe’s Magpies.

Those shortcomings in the final third led to a somewhat harsh and unnecessary verbal broadside from Grealish at the end of the season.

The England international looked pretty inebriated as he celebrated Manchester City’s title victory, joking that his team-mates were off their game during their final-day 3-2 comeback victory against Aston Villa.

“Riyad [Mahrez], take him off the pitch, as soon as possible. He played like Almiron,” Grealish said between booze-fuelled burps.

Almiron appears to have taken that criticism as motivation. He scored six goals for Howe’s side in pre-season and has taken that form into the 2022-23 season – to the extent that he’s actually outperforming Grealish, the Premier League’s only £100million player – in a number of areas, most notably goals.

The Paraguayan has been among Newcastle’s best-performing players this season, notching his seventh goal of the campaign in an impressive 4-0 victory over Aston Villa. That’s more Premier League goals than Grealish has during his entire at Manchester City.

“If I was a manager, Almiron would be the exact kind of player I want,” said former Newcastle left-back Jose Enrique recently.

“He never stops running and even if he’s not performing, you know what you’re going to get. He’s always going to give his all and that’s what I love about him, as well as the amazing qualities he has.

“Almiron is a bit like Luis Diaz, he can change the game but most importantly he gives his all. I love watching him. How he calls for every ball and fights.”

We’ve taken a look to see how Almiron stacks up against Grealish this season (Premier League stats only).

“Miggy can Grealish have your shirt”

READ NEXT: An ode to Joe Kinnear & telling everyone to f*ck off at Newcastle