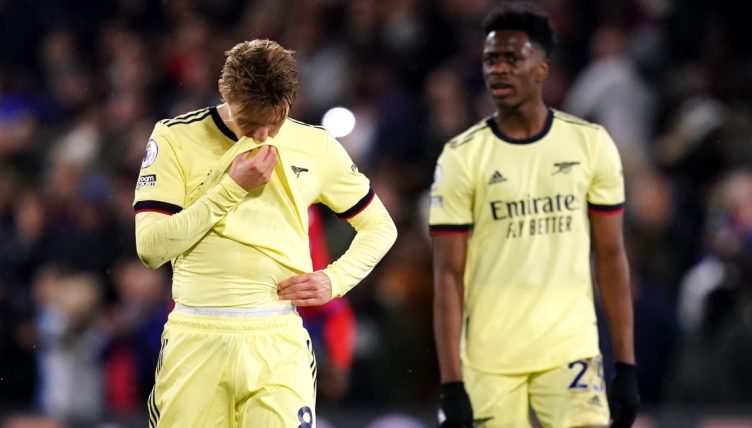 Arsenal’s hopes of qualifying for next season’s Champions League were dealt a huge blow by their 3-0 defeat to Crystal Palace in April 2022 – but it wasn’t the first time they have suffered a heavy defeat under Mikel Arteta.

The Gunners travelled to Selhurst Park in expectant mood, especially after Arteta was awarded the Manager of the Month award for March, but goals from Jean-Philippe Mateta, Jordan Ayew and Wilfried Zaha capped a humbling night for Arsenal.

While Arsenal have often suffered embarrassingly heavy defeats during Arteta’s reign, they have tended to come against the Premier League elite and have sparked a hailstorm of disapproval on social media – even if they normally recover well.

We’ve identified the six previous occasions where Arsenal have suffered defeat by three goals or more under Arteta and what happened next.

The first Premier League game of Project Restart will always be remembered as the game where David Luiz reached peak ‘David Luiz’.

A colossal mistake for City’s first goal, a penalty conceded and a red card reminded neutral fans everywhere just what they’d missed during the lockdown of spring 2020.

Arsenal had been making tentative progress since Arteta’s appointment in December 2019 but this was seemingly a reminder of the gulf between them and England’s elite.

But the new boss guided Arsenal to FA Cup success, beating Manchester City in the semi-finals and Chelsea in the final to end the season on an upbeat note.

An inexplicable scoreline looking back, but this heavy defeat to Villa in November 2020 led to the first murmurings of a relegation battle.

Bukayo Saka turned a Matt Targett cross into his own net and boyhood Arsenal fan Ollie Watkins helped himself to a brace as Villa inflicted Arsenal’s joint heaviest home defeat under Arteta’s management.

And things would get worse before they began to improve. The Gunners would suffer four defeats in their next six league matches, slipping to 15th in the table before a Boxing Day win over Chelsea finally kick-started their campaign…

But that Chelsea victory wasn’t before a Carabao Cup surrender to City’s reserves on a bleak December evening.

The latest thumping by Pep Guardiola’s side was mainly memorable for a heroically awful performance by rookie goalkeeper Runar Alex Runarsson, who was directly responsible for at least two City goals.

Runarsson has spent the 2021-22 season on loan at Belgian side OH Leuven and this limp defeat marked the nadir of Arsenal’s winter of discontent.

Buoyed by a three-goal comeback to salvage a draw at West Ham in their last fixture, Arsenal entered this match against a vulnerable-looking Liverpool with something approaching confidence.

But two goals from Diogo Jota and a classic Mo Salah strike underlined the gulf between the clubs as Liverpool outclassed their hosts at the Emirates.

“They were better in every department,” Arteta said afterwards. “I take the blame, it’s my responsibility. They were the best team by far. They won by three goals and it could have been more.

“For sure we cannot hit that level again. When you represent this club you have to stand up and take the challenge.”

Arsenal only suffered one more league defeat but their eighth-place finish meant they failed to qualify for Europe for the first time since 1995. Ouch.

After humbling defeats to Brentford and Chelsea, the last thing Arsenal needed was for resident nutter Granit Xhaka to pick up a red card with the Gunners already trailing 2-0City.

City never really hit the heights in August but still managed three more goals to leave Arsenal pointless and goalless at the foot of the Premier League table.

By the end, Arsenal had managed a single shot – off target – and 19% possession, while some of the away fans sarcastically celebrated City’s fourth goal as Arteta glowered on the touchline.

Scrappy 1-0 wins over Norwich and Burnley stabilised the side, and arguably saved Arteta’s job, before Arsenal began making steady progress up the league.

Forget the scoreline, this was all about the touchline scrap between Arteta and Jurgen Klopp. Like two children scrapping over the next turn on the swings…

Mikel Arteta and Jurgen Klopp come face to face on the touchline!