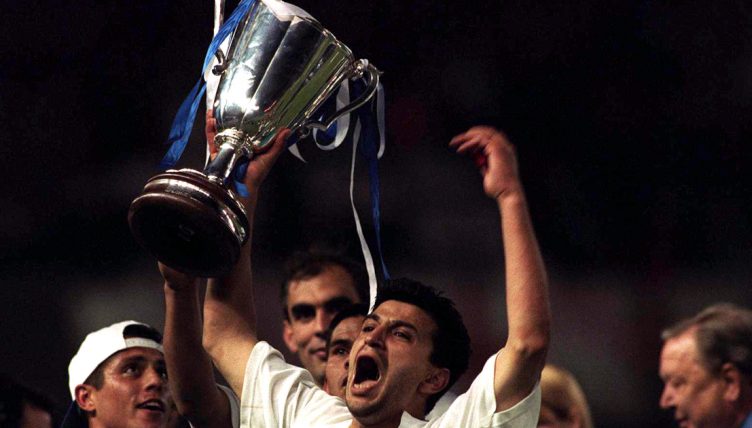 Tottenham Hotspur’s favourite Spaniard Nayim is 56 years old today and it’s as good an excuse as any to look at some halfway-line goals in honour of the man who scored one of the best of all time.

Nayim arrived in north London after struggling to break in the Barcelona side in the late 1980s, following Barca’s former manager Terry Venables to the English capital where he went on to become a cult hero for Spurs.

He stayed for 5 years at White Hart Lane, winning the 1990-91 FA Cup, assisting both goals in the final with Nottingham Forest.

He moved to Real Zaragoza in 1993 where he won the Copa del Rey in 1993-94 which earned the team a spot in the UEFA Cup Winner’s Cup the following season, in the final of which Nayim would score one of European football’s most legendary goals.

So here’s Nayim’s goal and eight other rockets from the halfway line we think are worth your time.

With the Cup Winner’s Cup final at the Parc de Princes tied at 1-1 in the dying embers of extra time and heading to penalties, Nayim stepped up and scored one of the greatest goals ever in a European final.

It was made all the sweeter by the fact it was against his former club’s arch-rival, as well. Ian Wright couldn’t believe it and nor could David Seaman, as the ball sailed over his head and he could only get his fingertips to it, unlike the trophy he now wouldn’t be able to touch.

Amongst the chaos of it all, just listen to the Zaragoza fans roar. Watch and enjoy: Nayim from the halfway line.

Nayim from the halfway line! May 10th, 1995. One of the great moments in Real Zaragoza’s history. Arsenal’s, not so much…pic.twitter.com/pG16x6DPkM

Rivaldo’s Barcelona career was full of stunning goals, not least of all this one against Atletico.

A beautiful and controlled effort that flew over the keeper’s head.

It’s not even the best bit of this video, however. Nor is the celebration. No, that would be the guy in the executive seat taking a much-needed puff of his cigar. See if you can spot him.

Rivaldo´s goal from the halfway line vs Atletico Madrid, 1998. pic.twitter.com/sipT6eqGx2

It’s time to stop lying to yourself and accept that David Beckham actually was a really good footballer.

Look at the way he looks up here, expertly judges the keeper’s position to perfection, and then fires it in perfectly from the halfway spot. One of the most iconic Premier League moments.

If we’re being honest, Steve Harper should have caught this one. But instead, he decided to audition for Dancing on Ice and in flew Alonso’s audacious effort.

He struck it well mind, and it’s always nice to see a Goalkeeper joining in with the celebrations like Pepe Reina did here.

Alonso had scored another earlier in the year against Luton in an FA Cup fixture, but he had been helped out by the goalkeeper with that one too considering he had come up for a late corner and wasn’t in any position to stop the ball rolling into the net.

Rooney took scoring halfway-line goals to new heights. Not content with just one, he scored two against the same opponent, albeit for different teams and three years apart.

The first one, for Manchester United, is the pick of the two. There was a touch of a foul on James Tomkins, but if we ignore that and instead focus on the half-volley, halfway-line looping effort which dizzied the keeper it’s a pretty stunning goal.

When Wayne Rooney plays against West Ham, it inevitably ends up with him scoring from the halfway line. Usually. pic.twitter.com/wI7yWTkZ1U

Yep, Charlie Adam scored from the halfway line. Against Chelsea at Stamford Bridge, no less.

The effort powerfully sailed over Thibaut Courtois, who could only grasp and flail at the ball, his outstretched hand merely gracing it as it nestled in the back of the net.

This is one of the longest in the list in which the keeper is within a savable distance of the goal too, outside of the centre circle in Adam’s own half.

On the full volley, in the Champions League with his leg about as high as his head. This is probably the best halfway-line goal ever in terms of pure technique.

It doesn’t matter that a young Manuel Neuer was in no man’s land after his theatrical, headed clearance, which was honestly some good goalkeeping.

The ball is so sweetly struck, and the volley so perfectly timed that you could watch the ball sail over everyone’s head and into the net all day, and you probably will.

This isn’t too bad either. Shrugging off one, getting away from another before sending the ball up and up before it darted down like a rocket the Standard Liege goalkeeper could do nothing to stop.

That was also the longest-ever Europa League goal, at nearly 50m out from the net.

Give the Puskas Award to Rangers’ Kemar Roofe already 🤩pic.twitter.com/vXavkamvY8

Look away Scotland fans, because unfortunately for you this one had to be included.

International tournaments are great for a couple of reasons, one being that at least one player decides to have a ridiculous run of games that no one expected.

At the Euros, one such player was Schick who fired this Czech rocket first time with his left foot over David Marshall’s head who ended up caught in the net like a fish out of water.

Have a Czech lager, sit back and watch. Na Zdravi.

READ NEXT: The Joy Of… the elastico: From Sergio Echigo to Ronaldo & Ronaldinho