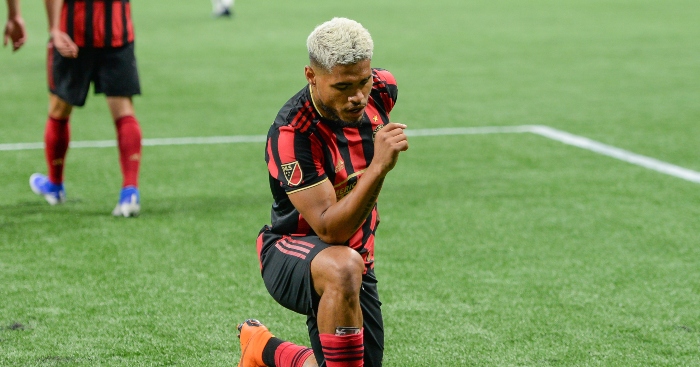 Back in March 2017, Major League Soccer fans were treated to a real throwback of a game.

Minnesota United and Atlanta United, that season’s two expansion sides, met for the first time in MLS on a snow-coated pitch in Minneapolis.

The weather was extreme, to the point that even a fluorescent ball wasn’t enough to cut through the blizzard-like conditions and give us anything like a proper feel for what was going on. One thing was clear, though: even when we could see little else, it was obvious that Josef Martínez was really, really good.

The Venezuelan striker had arrived from Torino, initially on loan, after a relatively uninspiring spell with the Italian club. It took just three games to convince Atlanta to exercise their option to make the move permanent.

One of those games, in the snow in Minneapolis, brought the first of what would prove to be many hat-tricks in an Atlanta shirt.

Despite the ball being barely visible on the TV cameras, it was easy to see from the shape of the striker’s body that he was in control, and so it proved as he scored the first, third and fifth goals of a 6-1 away victory.

Martínez would end his debut MLS campaign with three hat-tricks, adding another three in a record-breaking 2018 campaign, and as he prepares to represent his country at the 2019 Copa America he boasts a record of 60 MLS goals in just 69 games.

To put that into context, only 43 players have scored more in the competition’s 23-year history, and his ratio of 0.94 goals per 90 minutes is streets ahead of anyone else – David Villa, at 0.71, is the only other player in more than two decades to record an average of more than 0.7. Even without Miguel Almirón supplying him in 2019, it took him just 15 games to reach double figures.

He is a striker who trades in simplicity, with the bulk of his goals coming from close range, but he saved one of the classier finishes of his time in the US for the goal which saw him break the single-season goalscoring record in MLS.

For other players, the pressure of a personal target and a tight game in Orlando might have been enough to discourage what is known in the business as “f**king around”, but there was no danger of this here.

Indeed, as Martínez lifts the winner over Joe Bendik, he even seems to turn back towards the Orlando City goalkeeper as if to say “better luck next time”.

Venezuela have had good runs at the Copa América before, most notably in 2011 when they got within a penalty shoot-out of making the final.

However, while they were outsiders even in the group stages in that tournament, the talent of Martínez and fellow forward Salomon Rondón means they have every chance of making the knockout stages at a minimum this time around. Even if only one of them starts, each has enough firepower for two.

Rafael Dudamel’s squad ended an otherwise dismal World Cup qualifying campaign with a four-game unbeaten run, and have since recorded victories against both Argentina and the United States in friendlies.

The latter, a comprehensive 3-0 victory in Cincinnati, will fill them with confidence ahead of group games against Brazil, Bolivia and Peru and a chance to repeat the run to the quarter-finals of the Copa América Centenario in 2016.

Martínez set them on their way that time, too, scoring the winner in the group opener against Jamaica with a trademark drift away from his marker before his low finish beat goalkeeper Andre Blake.

He’s the sort of forward you dread playing against, purely due to this ability to go from zero to goal so quickly. On so many occasions, you’ll think you have a handle on where he is only to turn around and realise that tight marking job you thought you were doing was nothing of the sort.

It has been a year full of unexpected results, both in club and international football, so we’d be naive to expect everything at the Copa América to go exactly to plan.

But the key to any good shock is a forward who knows where the goal is, and Martínez certainly ticks that box. Now it’s time to see if he can get up a real head of steam when it matters.