New statistical study ranks every winner of the Premier League 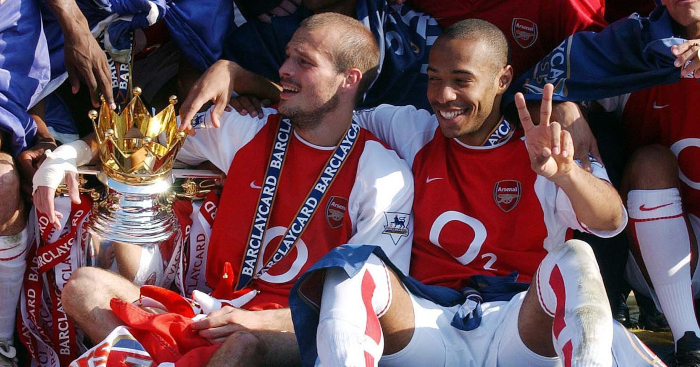 A study suggests that Arsenal’s ‘Invincibles’ team is only the ninth best side to win the Premier League, while the Manchester United treble-winning team is the fifth worst.

That’s according to a study by Insure4Sport, which has found that Pep Guardiola’s 2017-18 Manchester City side is statistically the greatest to win the English top flight.

Despite winning 27 games from 29, this season’s Liverpool team will become only the third best side to win the Premier League if it maintains its per game averages.

To come to these conclusions, Insure4Sport analysed 24 performance metrics for all 27 teams to win the Premier League, plus champions elect Liverpool. These ranged from goals scored to home goals conceded per game.

Each team was given a ranking from 1 to 28 for each metric, with 1 being the best and 28 being the worst. It was then given an overall total, which is the sum of its rankings added together. The lower a team’s total, the higher it finished.

This system threw up some incredible results, with certain positions likely to raise one or two eyebrows… 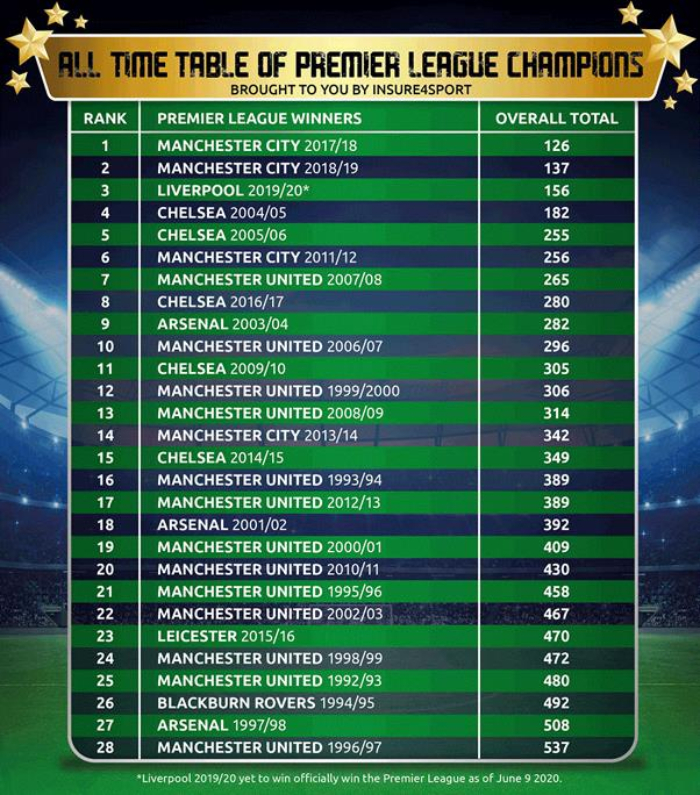 Manchester City 2017-18 finish top on account of their lethal goalscoring record. This team comes out on top for points, goals scored, away goals scored and goal difference. The City team from the following season finishes a close second, which is testament to the incredible consistency levels Pep Guardiola’s players have shown.

Although Liverpool’s current team has won 93% of its matches this season and is on course to break several Premier League records, it finishes third due to its defensive stats. This side has kept clean sheets in only 41% of its games – a figure bettered by 16 Premier League-winning teams.

The two Chelsea teams that won back-to-back league titles under Jose Mourinho make up the top five. The 2004-05 side still holds the record for fewest goals conceded in a league season (15) and most clean sheets (25).

Lower down the table, there are shocks galore. Arsenal’s 2003-04 side finishes ninth as it won fewer matches than 15 of the other teams to win the Premier League and scored fewer goals than 19. Elsewhere, Leicester City’s unlikely heroes of 2016 finish above Manchester United’s treble-winning 1999 team. Only two Red Devils sides – the 2006-07 and 2007-08 teams – feature in the top 10.

The United team that won the Premier League in Eric Cantona’s final season in 1996-97 is, statistically, the worst team to win the English top-flight. This team recorded the fewest points (75) and wins (21) of any champion and has the second worst defensive record, conceding 44 goals in 38 games.

Insure4Sport’s analysis also sheds light on how much football has changed over the years. A Premier League winning team over the last 10 years scored 14 more goals, won five more games and collected six more points on average than a title winning team in the 90s.

This begs the question – has the game become less physical and aggressive, allowing attacking players to flourish, or has the quality of football within the Premier League just got better?

You can draw your own conclusions by checking out Insure4Sport’s Premier League data here.