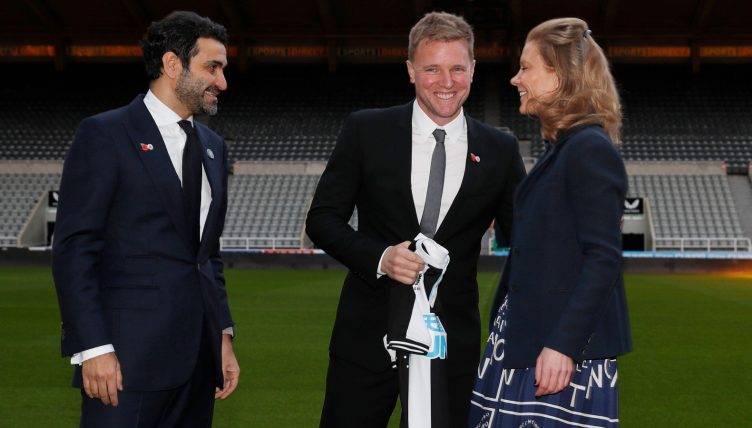 Newcastle United’s net spend is higher than any other Premier League club’s since they were taken over last year.

After 14 years of discontent in the Magpies fanbase under the ownership of controversial Sports Direct retail magnate Mike Ashley, Newcastle became the richest club in the world in October 2021.

The consortium, headed by Saudi Arabia’s Public Investment Fund, RB Sports & Media and PCP Capital Partners, has drawn criticism in many quarters, with accusations that Newcastle are being used as a ‘sportswashing’ project, as with clubs like Chelsea, Manchester City and PSG before them.

Liverpool manager Jurgen Klopp is among those that have bristled at Newcastle being backed by the wealth of a state.

Sacking Steve Bruce and replacing him with Bournemouth manager Eddie Howe was one of the first things the new owners did.

Howe has refused to be drawn into discussions over the ethics of their current owners, but he has defended the club’s spending.

“It’s a difficult one because it’s probably been used in the wrong way. What Dan meant with his comment was there’s no ceiling to our ambition long term,” Howe responded.

“We have huge plans and want to go to places with huge ambitions, but the reality of what we are working towards and working with, there is a ceiling because of all the things I have sat here and explained every week – Financial Fair Play, we’re still in a training ground that’s being renovated.

“We’re not living that life that is being discussed. We are living a very different reality. Our wage bill is very controlled. We’re trying to do things in a very stable and controlled way.

“Although we have spent money on players, it has not been extravagant or out of sync with the rest of the Premier League. Everyone has to be careful with their comments and opinions.”

It took time for Howe to make an impact at Newcastle, who went into 2022 looking destined for the drop. They were in the relegation zone at the turn of the calendar year, and only Norwich had picked up fewer points.

But things have drastically picked up since the new owners started investing in January. Dan Burn, Chris Wood, Kieran Trippier, Matt Targett and Bruno Guimaraes were all recruited in the mid-season winter transfer window, and they all made an impact in Howe’s Magpies comfortable midtable finish.

“Money doesn’t guarantee success. It certainly helps, but it doesn’t guarantee anything. You can recruit very badly and these days, that will cost you a huge sum of money, so it’s about a mixture of things,” Howe responded with asked about the investment whilst he’s been at the club.

“Time flies. It’s incredible to think as the months have ticked by that it’s nearly led to a year for me here. We’ve enjoyed it, but it’s gone so quickly.

“I do feel there’s an element of just starting with the team and we’ve got so much more to achieve and more to do. But I if am sat here in another year’s time, I’d probably be saying exactly the same thing.”

Newcastle followed up their January spending with further investment in the summer, breaking their transfer record for the second time in as many windows by bringing in Alexander Isak from Real Sociedad for a £63million fee. Sven Botman, Nick Pope and the permanent signing of Targett had all been secured earlier in the summer.

The likes of Burn, Bruno and Trippier have been particularly influential in Newcastle’s upsurge in form, but existing squad members such as Joelinton, Miguel Almiron and Fabian Schar have all improved exponentially during Howe’s tenure so far.

Established European giants like Chelsea and Manchester United have spent more in absolute terms since Newcastle’s takeover, but raised some funds by selling assets like Timo Werner, Emerson, Billy Gilmour and James Garner.

Under their Saudi-backed owners, Newcastle are yet to recoup any considerable transfer fees, with a £2million loan fee from Manchester United for goalkeeper Martin Dubravka their most considerable departure of 2022.