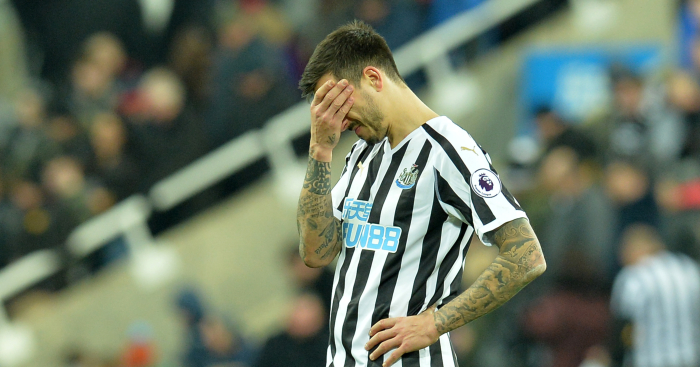 Since Mike Ashley took charge of Newcastle United, the Magpies have failed to make it past the fourth round of the FA Cup.

Newcastle reached the FA Cup semi-finals under Graeme Souness in 2004-05 and made it to the sixth round the following season but have since been criticised for lacking the ambition to reach the latter stages of the competition.

We’ve taken a look at every one of their FA Cup campaigns since they last reached the fifth round to see if their apathy towards the competition actually helps their league prospects.

Drawn away at Championship side Birmingham City, Newcastle appeared to be heading through to the fourth round as they led 2-1 against the 10-man hosts, only for Sebastian Larsson to force a replay with a late equaliser.

Few would have predicted the result of the replay, as Birmingham thrashed Newcastle 5-1 at St James’ Park. Glen Roeder had named the same starting XI that had just won 3-2 at Tottenham, but Steven Taylor was sent off in the second half as the Magpies suffered their worst home defeat in the competition since 1914.

What happened next: Newcastle won just three of their remaining 15 Premier League fixtures and were dumped out of the UEFA Cup by AZ Alkmaar, despite leading 4-2 after the first leg. Roeder resigned after a 2-0 defeat to Blackburn at home in the penultimate game of the season.

The first campaign under Mike Ashley saw Newcastle beat Stoke after a replay in the third round, only to be well-beaten 3-0 at Arsenal thanks to an Emmanuel Adebayor brace and an own-goal from Nicky Butt.

Ashley had recently sacked Sam Allardyce, meaning this was only Kevin Keegan’s second game back in charge of the Magpies, who had an Alan Smith header cleared off the line in the first half with the score still at 0-0.

What happened next: Newcastle were beaten by the exact same scoreline at the Emirates just three days later and lost a further four consecutive games before a mini revival of seven unbeaten saw the side finish 12th, seven points clear of the relegation zone.

The glory days of Joe Kinnear saw Newcastle draw 0-0 away at Hull City before naming a strong side for the replay at St James’ Park.

But Michael Owen missed a trio of good chances, while Xisco fired over from six yards out and Nicky Butt hit the bar, allowing Daniel Cousin to score a late winner for the Tigers. Both Kinnear and Hull boss Phil Brown were sent to the stands for clashing on the touchline.

What happened next: Kinnear had to step down due to ill health, and Newcastle were eventually relegated under Alan Shearer after finishing one point behind Hull.

Plymouth were seen off in the third round as Newcastle triumphed 3-0 after a replay, setting up a tie with West Brom, who were challenging the Magpies for promotion.

In a rollercoaster game at the Hawthorns, the Baggies came out 4-2 victors as Ryan Taylor saw red for Newcastle.

What happened next: Newcastle lost just once more all season, winning 15 of their remaining 21 Championship fixtures to win the Championship.

Newcastle became just the fourth top-flight team to lose to fourth-tier opposition since the formation of the Premier League by by going down 3-1 at League Two Stevenage, who sat 73 places below them in the footballing ladder.

Alan Pardew made five changes to what was still a strong Newcastle side but saw Cheik Tiote sent off after coming off the bench.

What happened next: Having sat eighth in the Premier League at the time of the defeat, Andy Carroll was sold to Liverpool at the end of January and Newcastle won just three more times all season to finish 12th, once again seven points clear of relegation.

Pardew’s side were flying high in the Premier League and saw off Blackburn in the third round only to lose 1-0 at Championship outfit Brighton due to a Mike Williamson own-goal, created by boyhood Toon fan Will Buckley.

What happened next: Senegal strikers Demba Ba and Papiss Cisse returned from the African Cup of Nations and Newcastle went on a six-match winning run to end the season in fifth, only four points off the top four (although Chelsea winning the Champions League made fourth place irrelevant).

Brighton were again the scourge of Newcastle, who lost for the seventh time in eight matches as Shola Ameobi saw red in a 2-0 defeat.

The loss meant it was the third successive season the Magpies had been knocked out by lower league opposition. “Newcastle are in a mess,” wrote Jacob Steinberg in The Guardian.

What happened next: Six Premier League wins in the second half of the season were enough for Newcastle to avoid relegation in 16th, while they were knocked out of the Europa League quarter-finals by Benfica.

Newcastle were beaten at home by Cardiff City for the first time in 51 years in what was Ole Gunnar Solskjaer’s first game in charge of the Welsh outfit.

The Magpies were sat comfortable in eighth place in the Premier League, but Pardew was made to pay for making seven changes to his starting XI.

Pardew at least had the good grace to warn supporters in his programme notes, writing: “I am not convinced the timing of this historic weekend is conducive to Premier League teams being at their best with the nature of the Christmas fixture schedule placing unrealistic demands on the players.”

What happened next: Newcastle lost 12 of their remaining 18 fixtures in the league, dropping to 10th in the table.

Pardew had left Newcastle to join Crystal Palace just days before the Magpies faced Leicester, who were bottom of the Premier League at the time.

John Carver was in the dugout for the visitors and made wholesale changes to his side, while fans were urging Mike Ashley to “get out of our club” come the end of the 1-0 defeat.

What happened next: Carver somehow remained in charge until the end of the season and very nearly took Newcastle down after going on a run of eight consecutive defeats. Having spent so much of the season bottom of the league, Leicester finished above Newcastle.

A fourth successive third-round defeat saw Newcastle beaten 1-0 at Watford, who were gifted a goal when Georginio Wijnaldum’s back-pass allowed Troy Deeney to score, despite Steve McClaren making just one change to the side.

What happened next: McClaren held on to his job until March, but a mini-revival under Rafa Benitez could not save Newcastle from relegation.

Progress at last as Newcastle beat Birmingham following a replay, only to suffer more embarrassment with a 3-0 loss at League One Oxford after Benitez made nine changes to the side.

What happened next: A little wobble aside, Newcastle cruised to promotion, stealing the Championship title on the last day of the season.

The Magpies managed to avoid another loss to lower league opposition by beating Luton Town 3-1 in the first leg but were soundly beaten 3-0 at Chelsea in the fourth round.

What happened next: Newcastle were just one point above the relegation zone at the time of the Stamford Bridge defeat but ended the season in 10th place.