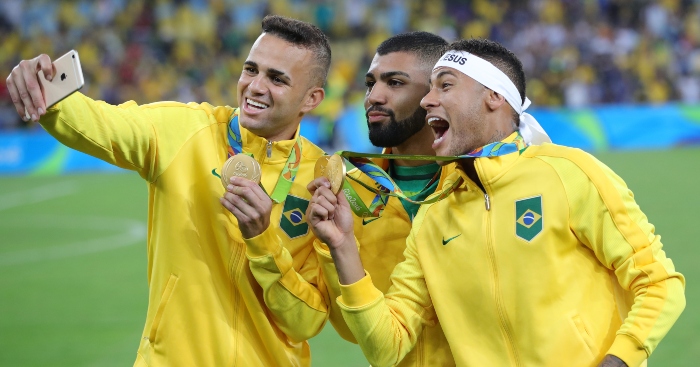 We all know what happened to three quarters of Brazil’s star-studded Olympic-winning attack, but what of the fourth member?

Gabriel Jesus is busy putting Real Madrid to the sword with Manchester City, Gabigol is reviving his career with Flamengo after a difficult time in Italy and Neymar – well, we all know about Neymar.

Luan, though, has not enjoyed the same level of fame as his colleagues from the Rio Olympics in 2016. By staying in Brazil, he’s stayed out of the limelight relative to that trio, but has he failed to kick on or just failed to kick on by Eurocentric standards?

Then on the books of Gremio, Luan scored three goals in Brazil’s run to glory.

After the Selecao opened their campaign with back-to-back goalless draws, his input against Denmark – a goal and an assist – helped ensure they’d even have a shot at the knockout rounds.

But it was there that the 23-year-old really came of age. The highlight came against Colombia, with a lofted finish to beat opposing goalkeeper Cristian Bonilla, but he also added a tap-in against Honduras and a penalty in the gold medal match against a tough German side that included Serge Gnabry, Julian Brandt and Niklas Sule.

At that stage in his career, Luan was coming off the back of a 17-goal season and ready to kick on.

In contrast, Neymar’s 2015-16 campaign had brought a final tally of 31, while Gabigol had scored 21 times in 2015, though Gabriel Jesus – the youngest of the quartet – hadn’t even hit double figures.

However, in the years since, things haven’t gone the way some of us might have anticipated.

Luan has still yet to score 20 times in a single campaign, while the 10 league goals he scored in 2015 remains his best ever return.

Neymar and Gabigol have both exceeded 25 in a season since, while Gabriel Jesus – who is only now the same age Luan was in 2016 – has scored 17, 21 and 18 in his three Manchester CIty seasons.

Gabigol has scored 17 more goals in the Brazilian Série A than any other player since the start of 2018 🇧🇷 pic.twitter.com/FmZ05yxgtx

At one point in January 2018, with a European move yet to materialise, Liverpool was floated as a potential destination for Luan. But the player himself quickly put paid to that idea.

“No one has come to me, so there is nothing,” he said at the time, adding: “I will not rush to want to leave soon, just like in the middle of last year.”

The rumours came off the back of Luan being named South American Player of the Year in 2017 (Neymar won in 2011 and 2012), an honour which demonstrates that, while he hasn’t been extremely prolific in front of goal, his form didn’t exactly drop off a cliff after the Olympics.

The goalscoring duties at Gremio in the meantime have been shared with Everton Soares, but Luan hasn’t always been outshone in the Copa Libertadores, scoring eight goals in the victorious 2017 campaign.

Luan did get his move away from Gremio over the winter, but he didn’t move to Europe.

Instead, he made the switch to Corinthians, the club he supported as a boy, and described it as a “childhood dream” to pull on their shirt.

He’s already got off the mark in the Copa Libertadores, albeit in a losing effort as Corinthians were put out of the competition on away goals by Guarani.

Measures of success are different for everyone, and it’s hard to ignore the successes of Neymar’s peers when assessing his development since 2016.

While Luan might not have had the prolific goalscoring record or the European acclaim of his Olympic team-mates, but one would imagine he’s not too disappointed to have seen his career pan out the way it has.