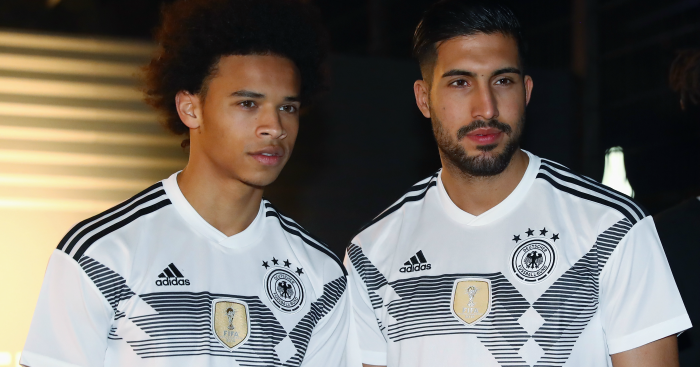 Nothing beats the build-up to a major tournament. The blind optimism, the squad announcements, the flags on cars, and, of course, the unveiling of the new kits.

Every couple of years, Nike and Adidas – the two giants of their industry – get their chance to wow the world with their slick new designs. And both have come up with some crackers for Russia.

Here, starting with the 2010 World Cup, we attempt to settle the debate once and for all of whether Nike or Adidas create the best tournament kits.

A pleasant entry for Nike at the 2010 World Cup. Their kits are bespoke, smart and unique, which is not something that can be said about many Nike kits these days.

Slovenia’s away kit was our favourite Nike design during South Africa’s tournament. It will not be everybody’s idea of beauty, but it’s unique, and that is a big plus for us. 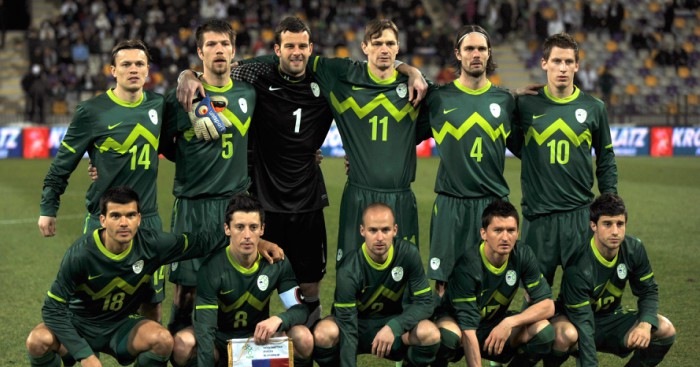 Brazil’s away kit also impressed us. There is certainly a recurring collar template emerging, but it’s subtle enough to let it slide. The quaint polka-dotted front is a nice addition, though it’s a shame Brazil’s forgettable quarter-final exit will condemn this kit to the bargain bin. 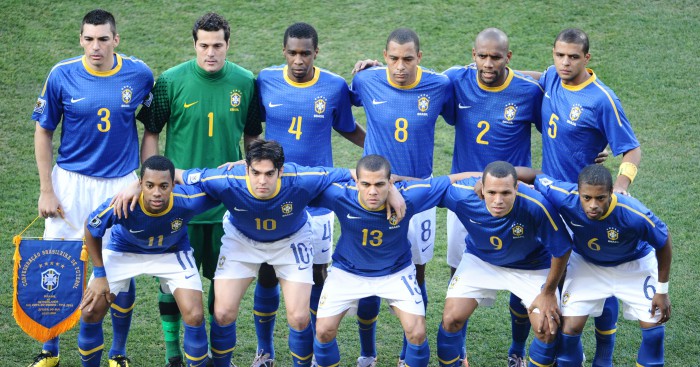 Hmmm, this isn’t our favourite instalment into the Adidas catalogue. Spain may have won this World Cup, but the kit is a little on the inconspicuous side.

Having said that, Casillas’ goalkeeper kit is smart, so we’ll give Adidas a bonus point for that. 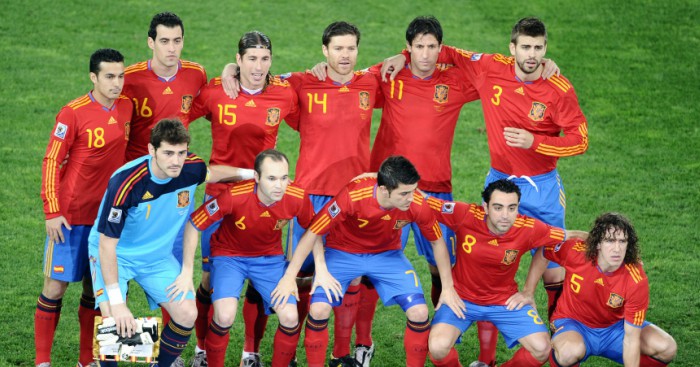 Now this is a fitting kit for the French team of 2010. Finishing bottom of their group – below Uruguay, Mexico and South Africa – and coach Raymond Domenech essentially overthrown from his position by a Patrice Evra-inspired revolt, France’s World Cup was an absolute disgrace.

Their kit was a suitably unpleasant eyeore, with a little too much happening around the waist. 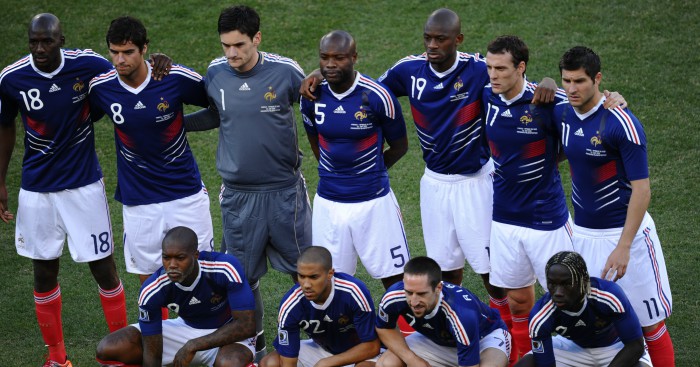 Now THAT is a football kit. After the debacle of 2010 – both on the pitch and in the wardrobe – France defected to Nike. What a decision that turned out to be.

The collar is not too loud, unlike Manchester United’s 2013-14 kit for example, and the horizontal style works very well. A massive upgrade for Les Bleus. 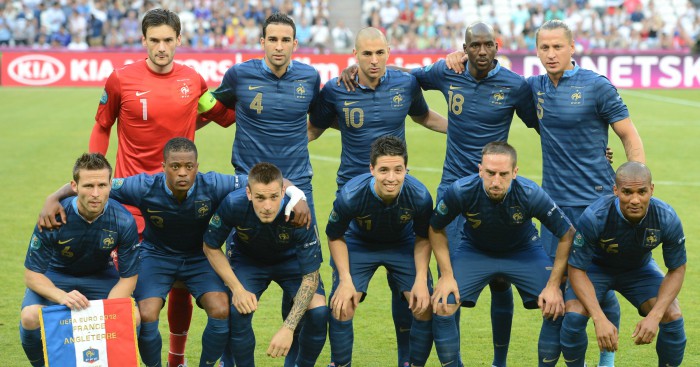 Sexy, sultry and mysterious. The Dutch have bounced back from their World Cup final heartbreak two years previous with this tasty away kit.

There’s nothing too complicated here, but you still know straight away that this is a Netherlands kit. A totally different design to France’s strip in every way, and a big success for Nike. 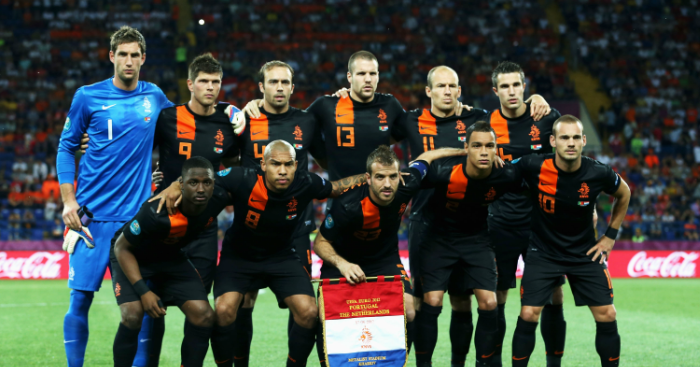 Adidas certainly stepped their game up for Euro 2012, especially with this beautiful bespoke kit sported here by Russia.

The diagonal slashes – in the Russian colours of course – are very pleasing on the eye, particularly as the goalkeeper has one as well. 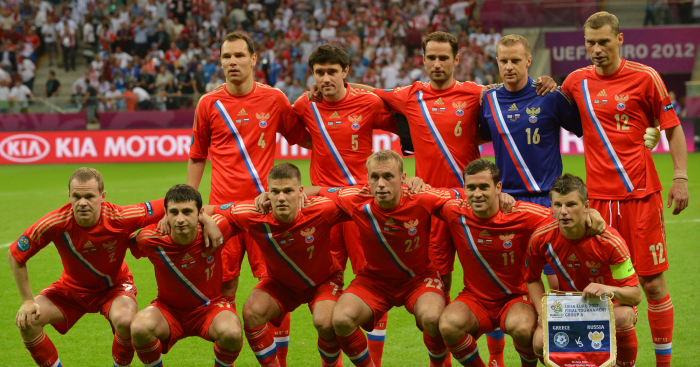 This is a classic Adidas kit: clean and smart. We always feel for kit manufacturers who have to re-design kits for teams who play in all-white, but Adidas have done a good job here with Greece.

There are hints of blue in all the right places, while the faint cross going through their badge works very well. 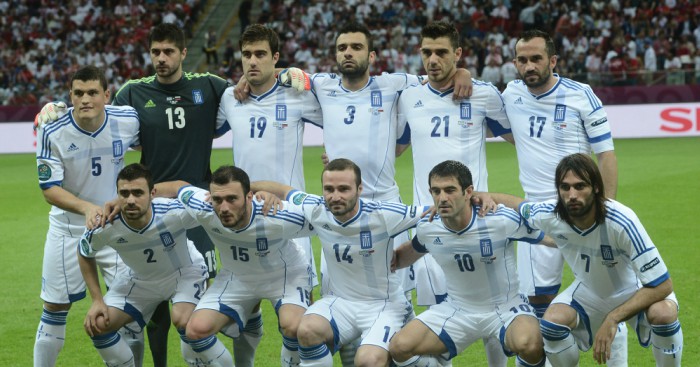 Another strong start for Nike, this time in Brazil at the 2014 World Cup. The deep red and strong horizontal lines on Portugal’s shirt make for an imposing sight, and the green tinge on the collar goes well.

They may have been dumped out of the group stage, but they sure looked good doing it. 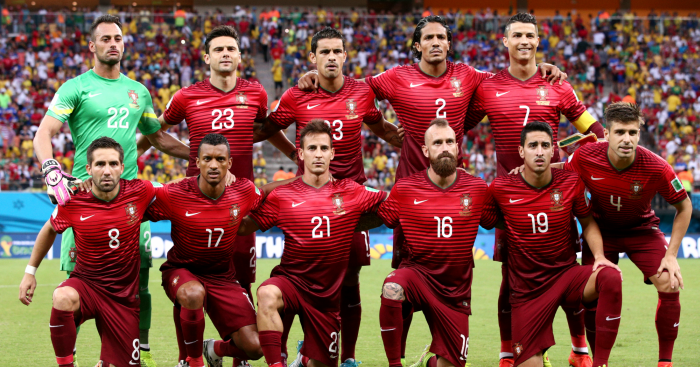 Ah, not quite such a pretty sight. It seems Nike’s budget was fully spent on Portugal this summer, as the USA turned up in their training kit instead.

We see where Nike was going with this, but it’s just a little too loud and clunky. 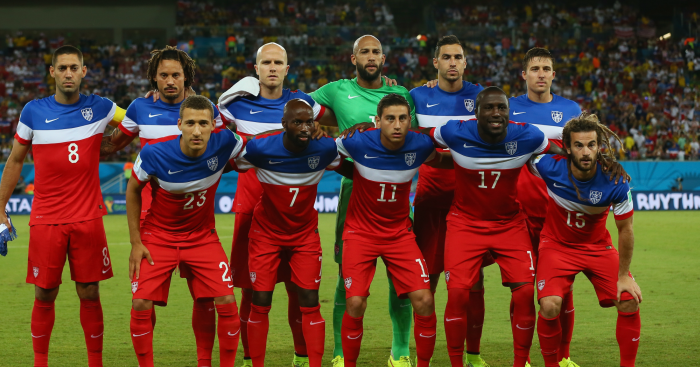 Now that is more like it, Adidas. The Colombians certainly set the 2014 tournament alight, with a fitting kit to match. Who doesn’t love a yellow kit done right?

It’s no surprise they look like such a happy bunch. 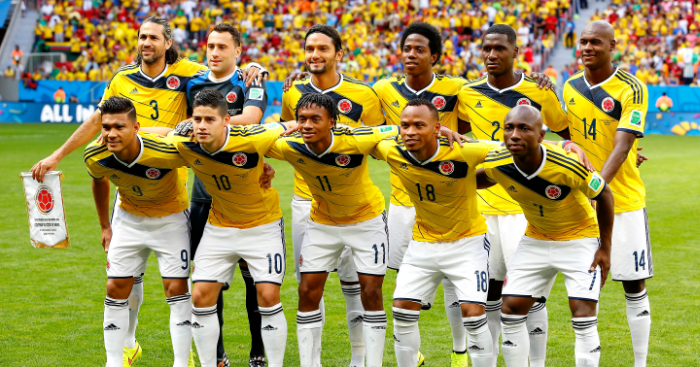 Like with the Russian kit in 2012, there’s something immensely satisfying about a goalkeeper’s design matching the rest of the team.

It’s a bold move from Adidas, but we think this looks excellent. A shirt that will make appearances in boiler room sessions for the foreseeable future. 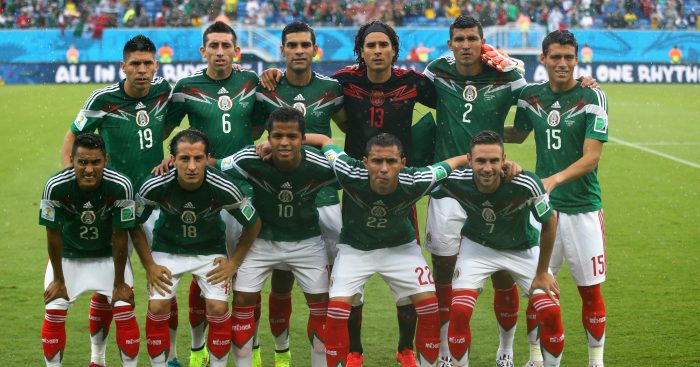 Things are about to get controversial, so buckle in.

It all starts off very well for Nike indeed, as their Croatia kit is an absolute thing of beauty. The chequered sleeves look fantastic and those matching socks just look so good. We have a soft spot for pink goalkeeper kits as well, so that can only make things even better. 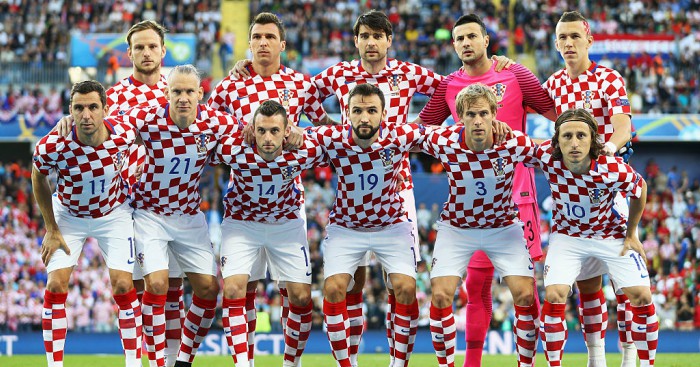 A point docked for the identical goalkeeper kit – even though it’s pink – but we adore this. Nobody likes a boring football kit, so Turkey’s away strip just does it for us.

Admittedly it looks a little like a fishnet around the torso, but it’s memorable, and that’s rarely a bad thing. 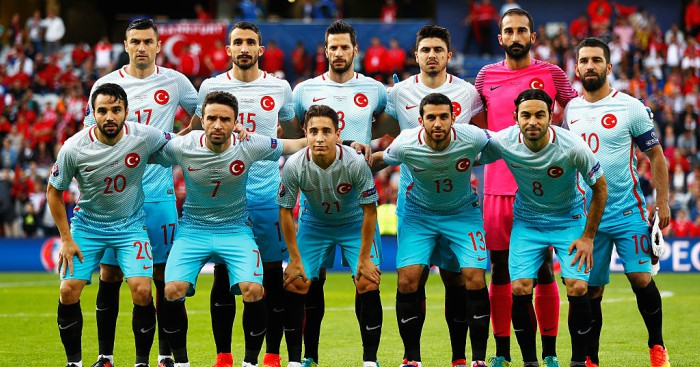 Unfortunately, Nike undo all their good work with their Croatia and Turkey kits by doing this: 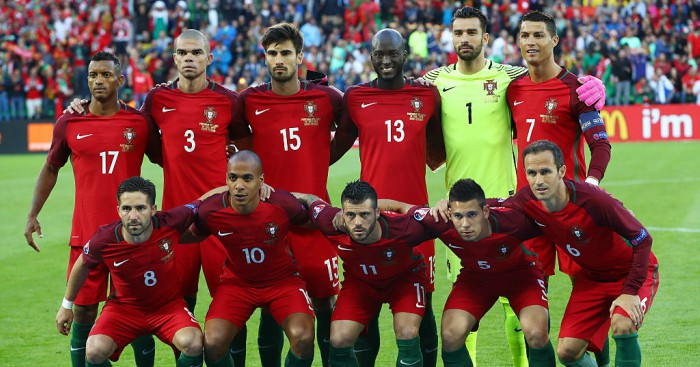 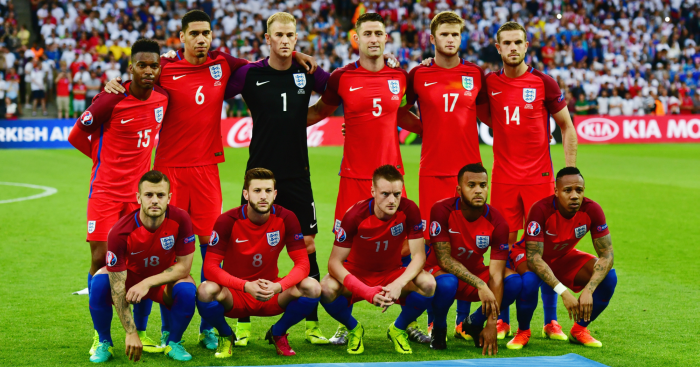 Yep, it’s the same kit. Regrettably lazy template usage by Nike here, so they are disqualified.

Wowzers, now this will split opinion.

We have decided it’s wonderful. It’s a mess, but it’s a beautiful mess, and we rarely have any complaints when it comes to bespoke kits.

Spain’s are usually neat and tidy – like they are on the pitch – so this is a nice change of pace. 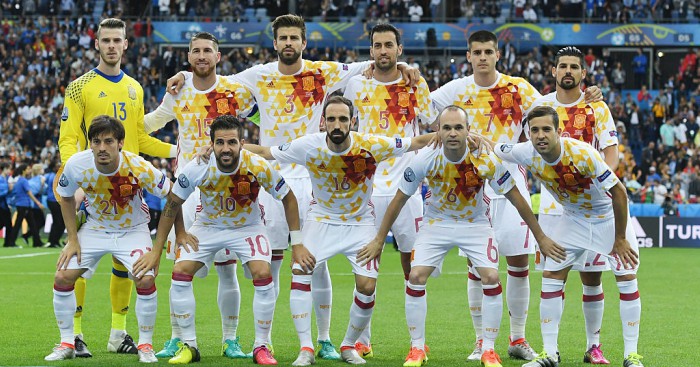 Every time we look at this kit, our opinion changes. We loved it at first, then we hated it, now we love it again.

We’ll let you decide this one. 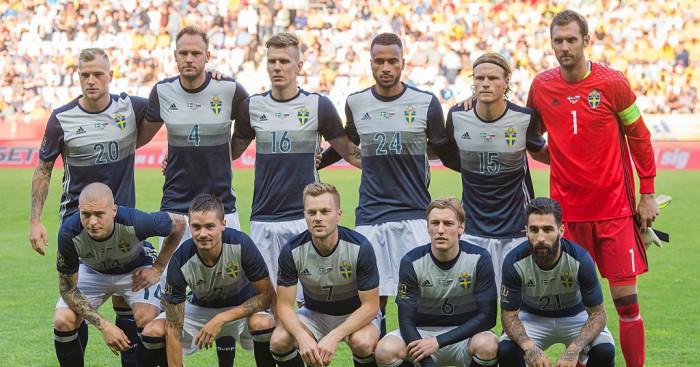 Nike, you have redeemed yourselves from the Euro 2016 template disaster, a thousand times over.

This Nigeria kit is one of the most stunning football kits we have ever seen. Some people disagree…but those people are wrong.

It doesn’t get any better than this, and we want this to be your everlasting impression of Nike’s contribution to the tournament, so this is your lot.

My word, there are some nice kits coming up at the 2018 World Cup.

Inspired by their shirt from the mid-1990s, Spain have done it again. It’s an asymmetrical strip done right, and another kit with the potential to become a classic. 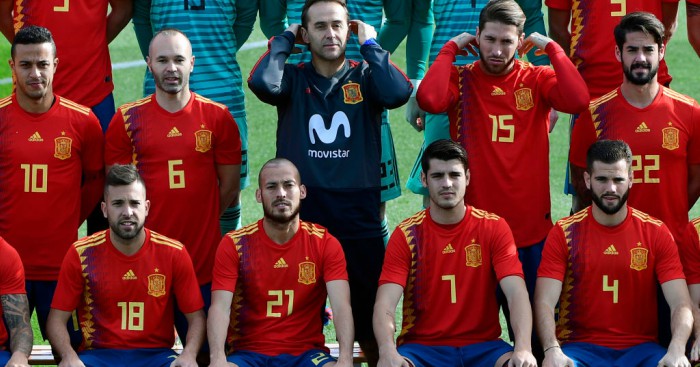 Adidas are loving their classic kits this year. Germany will be donning a smart reboot of their iconic 1990 World Cup winning jersey, but in black and white, which is a bit of a shame.

The World Cup winners badge is also an eyesore, though I doubt they are complaining too much about that. 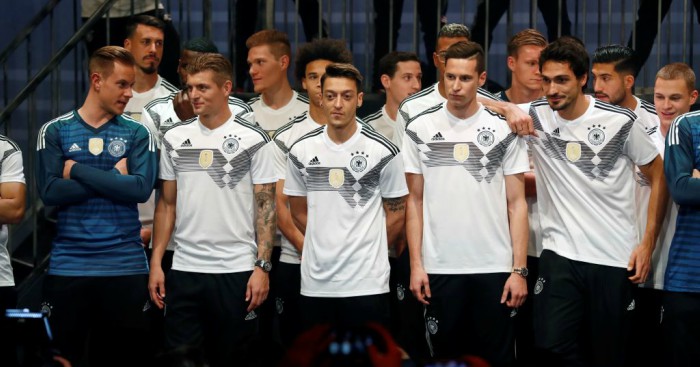 It was a close-run thing, but we have decided Nike are the tournament kit-kings of the 2010s.