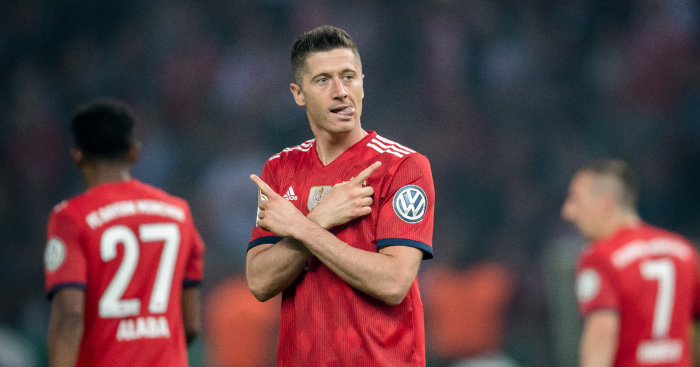 It’s less than six months since the 2017 Ballon d’Or was awarded to Cristiano Ronaldo – and he’s one of several nominees being linked with a summer transfer.

The shortlist for the award featured 30 names deemed to be the best players in Europe throughout 2017, voted by football journalists.

Being the best in Europe, these players are obviously in high demand, and we’ve taken a look at every transfer rumour involving those on the shortlist.

“It was very nice to be at Real Madrid. In the next few days, I will speak.”

This certainly isn’t the first time Ronaldo has hinted he could leave Madrid, but the 33-year-old insists his comments in the immediate aftermath of their latest Champions League victory was not a ploy to get an improved contract.

“This has been coming for a long time. Money is not the problem,” he said. “I spoke when I shouldn’t have done but something is going to happen. It wasn’t the right time, but I was honest.”

If ROnaldo really is leaving, he is unlikely to be short of suitors.

Buffon was touted for the award after yet another year at the top with Juventus, winning both league and cup and reaching the Champions League final.

He finished fourth in the voting, and instead of announcing his retirement at the end of this season as expected, he announced he would be leaving Juve after 17 years, with PSG among those clubs apparently vying for his signature.

“Robert believes he needs a change and a new challenge in his career, Bayern officials know it.”

Lewandowski has hired Pini Zahavi to get him a transfer this summer – and the agent hasn’t wasted any time in letting Europe’s top clubs aware of his availability.

Chelsea are being strongly linked with the Poland international, who scored 14 more goals than anyone else in the Bundesliga this season.

As seems to happen every transfer window, Isco has been linked to the financial powerhouse that is Manchester City.

While manager Pep Guardiola brushed away the idea at a recent event – not to mention the astonishing €700million release clause in his contract – reports continue to suggest city could make an €80million offer for the Real bit-part man.

“It makes the club proud to bring players of this quality like Antoine, like [Ousmane] Dembele and [Philippe] Coutinho came.”

Speaking at the start of May, Luis Suarez certainly seemed to believe Barcelona already have a deal in place to sign Griezmann.

Other clubs have been linked, too, with the France forward stating he wants his future clarified before the World Cup beings on June 14.

Griezmann scored 29 goals in all competitions this season, including two in the Europa League final, and Atletico are understandly doing everything in their power to keep him at the club.

Finishing fifth in a disappointing attempt at a title defence, Chelsea are expected to be vulnerable to offers for Hazard, who has said he is happy at the club but wants them to prove their ambition.

“I’m waiting for new players next season. I want good players, because I want to win the Premier League next season,” he said, with Real Madrid known admirers of the forward.

Reportedly keen on a move to the Premier League, this summer could be one of change for Benzema after a disappointing season culminated with him missing out on a place in France’s World Cup squad.

Despite netting in the Champions League final, the 30-year-old managed just five goals in La Liga all season, and Benzema could be a replacement for former team-mate Alvaro Morata at Chelsea, while Arsenal are also long-term fans of the forward.

After winning his third successive Zamora Trophy – an award handed to statistically the best goalkeeper in Spain at the end of every season – Oblak is in high demand.

Reports suggest that Atletico are expecting offers too big to turn down from the likes of Arsenal and Liverpool, whose search for a new goalkeeper is well documented after Loris Karius’ Champions League final mishaps.

Rumoured to be on Chelsea’s radar, Hazard’s countryman Mertens stoked the fire by praising their could-be new manager Maurizio Sarri.

“Sarri is a world class coach and he will prove it,” he said. “Everyone he has coached has made important steps forward in terms of their quality and I’m convinced he will find a great team where he can prove just how good he is.”