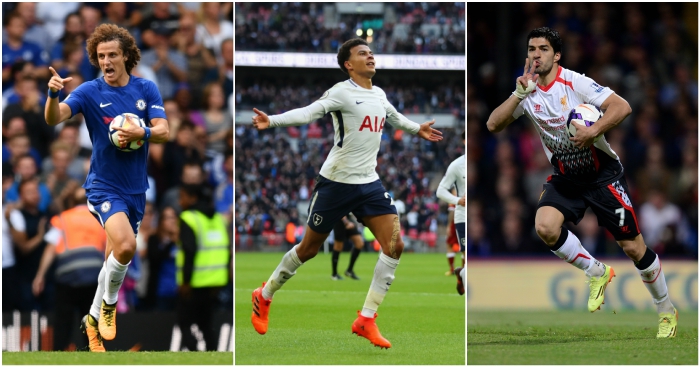 The big clubs tend to be quiet on transfer deadline days – but some terrific signings have been made on the last day of the January window since it was introduced in 2003.

The January window represents the last chance for clubs to strengthen their squads for the all-important second half of the season, and while some dreadful panic buys have been made, there has also been some great business done on the last day…

Signed for an absolute steal at just £5million (plus add-ons), Alli joined Tottenham from MK Dons before being immediately loaned back for the remainder of the campaign.

Few would have expected him to step up to Premier League level straight away, but Alli ended up making 46 appearances in his first season, scoring 10 goals and winning Match of the Day’s Goal of the Season award for his stunning strike against Crystal Palace

He won the PFA Young Player of the Year award two years in a row and has already passed 60 goals for Spurs. Not bad.

Another absolute steal considering what he’d cost now, Zaha returned to Palace for just £3million, having spent the first half of the season on loan from Manchester United.

He has been shining for the Eagles ever since and was even linked with Juventus in the 2018 winter window.

Now a two-time Premier League winner, Stones blossomed at Everton, though he also gave the fans plenty of heart-in-mouth moments.

The first time Chelsea signed Luiz was also the first time they sold Nemanja Matic, giving Benfica £21.3million and the Serbia international in return for the defender’s signature.

Luiz finished with just short of 250 appearances for the Blues in all competitions, winning the Premier League, Champions League, and both the FA Cup and Europa League twice.

Following his first biting incident, Ajax were offering Suarez to European clubs, and Liverpool took the bait (sorry!) and signed the Uruguayan for £23million on the day Fernando Torres departed for Chelsea.

After his second biting incident, he said he wanted to leave Liverpool but went on to have his best season for the Reds, scoring 31 goals in 33 games to earn the Golden Boot and PFA Player of the Year award.

Along came his third biting incident, however, and Barcelona signed Suarez in 2014 after 82 goals in 133 appearances for Liverpool. He’s done OK since then…

Arshavin made his most memorable contribution in an Arsenal shirt just a couple of months after joining when he netted all four of his team’s goals in the 4-4 draw with Liverpool at Anfield.

Two years down the line and he cemented his status as a cult hero as he scored in Arsenal’s first ever victory over Barcelona. Martin Tyler certainly enjoyed it.

He’s a women’s fashion designer in his spare time.

Having been on loan at Blackburn for the first half of the season, Bentley joined permanently on deadline day in 2006.

The next day he banged in a hat-trick as his new club beat Manchester United 4-3, making him the first player to do so against the Red Devils in the Premier League.

For the service provided to the club, Dawson was an incredible buy for Spurs, moving to White Hart Lane from Nottingham Forest for just £4million.

He played 324 times across nine years at the club and even shed a tear on the pitch when he returned to White Hart Lane with Hull in 2015.

Spurs paid £6million plus Bobby Zamora to sign Defoe from West Ham, and it proved to be money well spent.

Despite a short spell away at Portsmouth, the striker is remembered fondly by Tottenham fans, having netted 143 goals in 363 appearances for the club.

Bastian Schweinsteiger & other legends who came to England too late