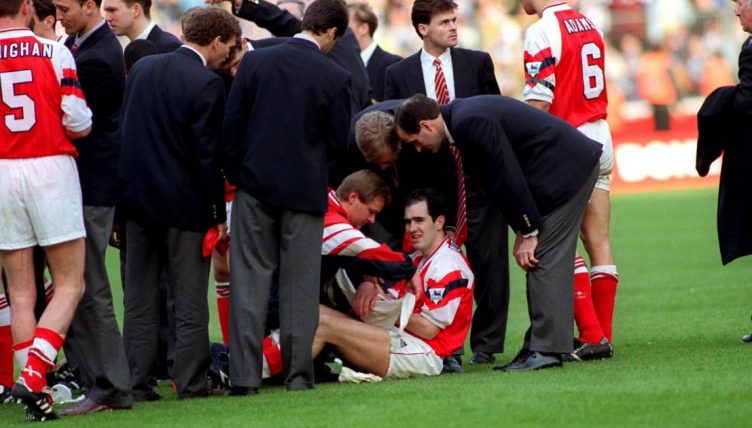 Celebrating a goal is supposed to be one of the most joyous moments in football, and life in general, but it isn’t always as straightforward as it sounds.

We’ve all dreamed about how we would celebrate if we managed to score a goal for the club we support.

A choreographed dance? A Tardelli scream? A Shearer salute? Whatever you do, just don’t do what these players did.

Celebrating a winner in a cup final is a unique opportunity which the vast majority of players miss out on in their careers.

Morrow was afforded the rare chance after completing Arsenal’s comeback against Sheffield Wednesday in the 1993 League Cup final.

The former Northern Ireland international was greeted by a certain Tony Adams, who lifted the midfielder into the air, only to slip, resulting in Morrow crashing to the ground.

A badly broken arm saw Morrow miss the medal presentation and the following month’s FA Cup final, which Arsenal also won, but it did allow the player to be immortalised by Baddiel and Skinner.

LuaLua was known for his trademark somersault celebration but promised he would not do it until Portsmouth were safe from relegation in 2005-06, having been warned about the risk of injury.

The forward’s equaliser against Arsenal did not quite lift Pompey out of the relegation zone – they remained in the bottom three on goal difference – but temptation greeted LuaLua like a naughty friend, and he promptly suffered an injury.

“I felt a twinge in my ankle when I landed after the header and probably should not have done the flip,” he said. “But I was carried away with the emotion of scoring against Arsenal.”

Harry Redknapp said: “He still did his triple somersault with pike without realising he’d hurt himself. He’s a one-off.”

When Harte scored against Deportivo in the 2001 Champions League quarter-finals, the left-back became the physical manifestation of the free-kick he had just tw*tted in.

A fireball of adrenaline and intensity, Harte stormed to the crowd, perfecting an often troublesome knee slide (more on that later).

But he wasn’t done there, the corner flag was in his way, and he wasn’t going to stand for that.

Slap; the corner flag went tumbling, and Harte continued to propel forward. But then it unexpectedly sprang back, catching him by surprise as he took a tumble and awkwardly had to style it out.

Harte managed to nail it, but the failed knee-slide really is a genre of its own.

Brighton produced a brilliant guide to the dos and don’ts of the celebration in their 3-0 win at West Ham in October 2017.

Having a bad Sunday?

Let Anthony Knockaert's attempt at a knee slide cheer you up. pic.twitter.com/wlZfwBMXFV

We won’t devote this whole article to crap knee slides, but we couldn’t resist Aboubakar’s effort, mainly because he looks genuinely p*ssed off afterwards.

While playing for Swiss side Servette, Diogo once celebrated laying on an assist for Jean Beausejour by climbing a metal perimeter fence which separated him from the travelling fans.

When returning to the pitch, the midfielder, who had recently married, failed to initially realise he had left his ring, still attached to his finger, attached to the fence.

To make matters worse, he was then booked for his celebrations, before collapsing to the ground upon the realisation his hand was suddenly feeling a lot lighter.

The problem with stadiums where the fans are a distance from the pitch is that players often face quite a trek to celebrate a goal with their supporters.

But that did not deter Coritiba striker Joel, who promptly jumped over the advertising hoardings to celebrate a late goal against Sao Paulo.

Someone probably should have told him there was a hole in the floor covered by flags.

Yes, you’ve seen this clip loads of times; and no, it’s not a goal celebration, but this video will never not be every kind of wonderful.

Ramos may not have had quite as much to drink as McCall, but literally throwing the Copa del Rey under the bus probably wasn’t a good move.

The defender later tweeted: “What happened with the cup was a misunderstanding, it didn’t fall … it jumped when we got to Cibeles [the square in Madrid] when it saw so many Madridistas … Hehehehe … everyone, don’t worry, it’s fine … Hope you have a good day.”

This was the moment Sergio Ramos dropped the Copa 😱

An open-top bus parade that will never be forgotten…#LLL
🧡🇪🇸⚽pic.twitter.com/AwXtZcnigK