Nine European transfers you might have missed: Odegaard, Albiol, Weah 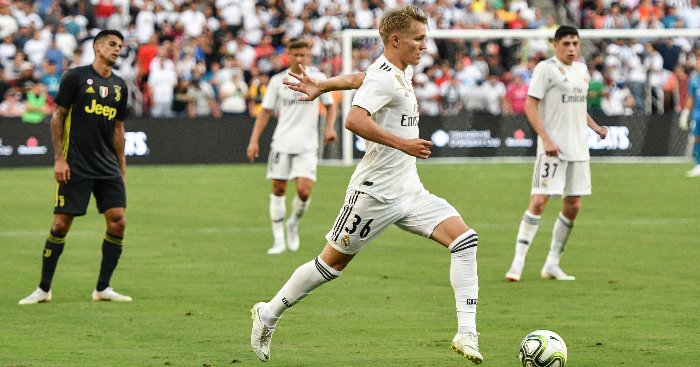 Now that the transfer window is properly underway, things have gotten pretty busy around Europe.

You’ll probably have noticed Gianluigi Buffon going back to Juventus, joined from PSG by Adrien Rabiot, while Mats Hummels going back to Borussia Dortmund, Diego Godin to Inter and the eye-watering fee Atletico paid for Joao Felix have all made headlines.

But you may have missed some of the other transfers around the continent. Here are nine that might have passed you by.

The left-back really stepped up last season as Marcelo had an uncharacteristically poor season at Real Madrid. After that, he might be a little irked not to be given further opportunities by Zinedine Zidane next season and sent out on loan to Sevilla.

But the new Sevilla boss Julen Lopetegui has a reputation for developing young Spanish talent, and he knows Reguilon well after promoting him to the first team during his short stint as Madrid coach. Expect the 22-year-old’s star to rise even further during this loan spell.

You’ve probably been aware of Odegaard for a few years now, and the Norwegian talent is still just 20 years old.

He’s gone from strength to strength during loan spells at Eredivisie sides Heerenveen and Vitesse, and the next one is his biggest opportunity yet. He’ll be spending the 2019-20 season on loan at Real Sociedad, which should give the best indication yet whether he’ll ever make it at his parent club.

Albiol made over 200 appearances for Napoli after making the move from Real Madrid in 2013, and is now heading back to La Liga.

Now 33, at the veteran stage of his career, he’ll be playing in alongside Santi Cazorla next season at Villarreal. What are David Villa, Joan Capdevila and Dani Guiza up to these days? Let’s have a full Spain Euro 2008 squad reunion.

The Mexico international is moving to Atletico Madrid on a free transfer, having played for Porto since 2013.

He’s a tenacious tackler and covers ground well, and is tidy enough with his passing. Diego Simeone will love him.

Such is the hype of teenage striker Timothy Weah – some of which comes by virtue of being George Weah’s son – that it was considered a real coup for Celtic to secure his services on loan for the latter half of last season.

Like at his parent club, opportunities in Glasgow were scarce, with just four league starts. He’s now left PSG for Lille, who finished runners-up in Ligue 1 last season.

The Borussia Dortmund legend seems to have been around forever, but he’s only 30 years old. He’s since spent 18 months at Saint-Etienne, playing alongside former Tyne-Wear derby rivals Yann M’Vila, Wahbi Khazri, Mathieu Debuchy and Remy Cabella.

He’s going back to the Bundesliga on a free transfer to newly-promoted hipster favourites Union Berlin.

Few cities in the world have produced as many brilliant footballers in recent years as Paris – Paul Pogba, Anthony Martial, N’Golo Kante, Kingsley Coman, Blaise Matuidi and Kylian Mbappe to name but a few – and Moussa Diaby could be the next.

Unfortunately, with PSG’s Galactico-style transfer policy, the pathway for many of their young stars is blocked by superstars from elsewhere. In search of more regular first-team football, Diaby has moved to Bayer Leverkusen for a €15million fee.

The right-back only made three Premier League appearances during four years at Newcastle but has since established a strong reputation for Young Boys and the Swiss national team.

He’ll be back in one of Europe’s bigger leagues next season, having signed for Wolfsburg.

Few teams see as many comings and goings as Sevilla, and this summer should be no different. Sporting director Monchi has returned and is looking to shake things up by building an entirely new squad for Lopetegui.

This is bad news for Promes, who endured an underwhelming season at the Ramón Sánchez Pizjuán after arriving from Spartak Moscow a year ago.

He scored just three goals in 49 appearances for the club, and has been allowed to leave already – the Netherlands international will be back in his home country next season, representing Ajax. Which is very good news for Promes.