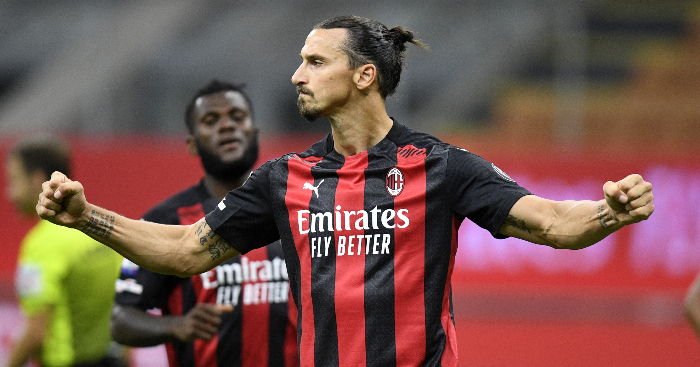 Zlatan Ibrahimovic is back at the top of the goalscoring charts after notching a brace for AC Milan against Bologna, the only player to score more than one goal in the opening weekend of the 2020-21 Serie A season.

He opened the scoring with a towering header before netting a second from the spot just after half-time, demonstrating remarkable longevity after first making his debut for boyhood club Malmo back in 1999.

– With 470 goals in 763 appearances, Ibrahimovic averages a goal every 127.7 minutes throughout his career. His best minutes per goal ratio is in Ligue 1, where he averaged a goal every 91 minutes with PSG.

– He’s now scored in 23 consecutive top-flight seasons after making his debut for Malmo in 1999.

Some well-known footballers that will playing in 4 straight calendar decades: (90s/00s/10s/20s)

– With his brace against Bologna, Zlatan matched Daniele Massaro and Pietro Arcari as 16th in Milan’s all-time top scorers. He’s now just five goals away from Marco Simeone in 15th and 20 away from breaking into the top 10.

– Between 2006 and 2017, he averaged 20 league goals a season between his stints with Inter, Barcelona, Milan, PSG and Manchester United.

– The most prolific stint of his career came in MLS, averaging nearly a goal a game for LA Galaxy with 52 goals in 56 appearances.

– Ibrahimovic and Cristiano Ronaldo are the only current players to have scored in every minute (1-90) of a game.

Zlatan Ibrahimovic is the first player to score 50 goals each for both Milan clubs in Serie A… pic.twitter.com/BJRyvzwIye

– The longest spell of his career came with PSG, in which he scored 156 goals in 180 appearances across four seasons. He was the club’s all-time top scorer for a period but has since been usurped by former strike partner Edinson Cavani.

– He’s won 11 league titles in four European leagues, not including the two at Juventus revoked after the Calciopoli scandal.