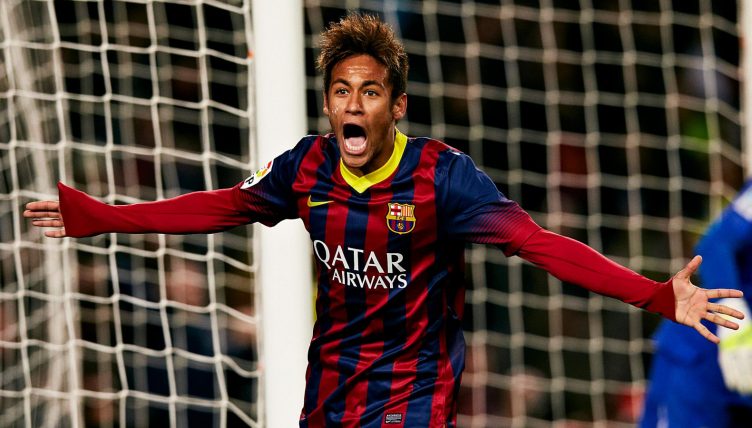 It’s now over five years since Neymar left Barcelona for Paris Saint-Germain. And while he’s been brilliant so far in 2022-23, we still reckon his best football came in Blaugrana.

The Brazilian spent four years at Camp Nou, scoring 105 goals in 186 appearances in all competitions.

He was no stranger to silverware either, winning two La Liga titles, three Spanish Cups, one Supercopa de Espana, one Champions League and a FIFA Club World Cup.

Here, we’ve take a look back at his time with the La Liga giants with nine defining moments during his spell at Barca…

Neymar joined Barcelona from Santos in the summer of 2013 for a reported fee of £71.5 million – a figure which only came to light after the transfer had been investigated.

His first match came in August 2013 in the first leg of the Supercopa de Espana against Atletico Madrid in which the Catalans came from behind to draw 1-1. The goalscorer was, obviously, Neymar.

The Brazilian planted a header into the bottom corner of the net after meeting a perfect cross from his compatriot Dani Alves, who linked up with again in Paris later on.

Neymar will have known the magnitude of Clasicos long before he signed on the dotted line at Camp Nou.

He announced himself in unbelievable fashion during his very first fixture against Real Madrid with a goal and an assist.

The Brazilian scored the opening goal when he received the ball from Andres Iniesta on the left-hand side of the penalty box before cutting inside to bend the ball off a defender and past Diego Lopez.

And he then capped his performance with a lovely weighted through ball to Alexis Sanchez, who wrapped up the 2-1 win with an incredible chip.

Neymar scored one of the goals of his career in Barcelona’s thumping of Rayo Vallecano.

With the Catalans already 5-0 up, Neymar capped the night with a fine goal. Brazil’s talisman picked the ball up on the halfway line, glided past one challenge before unleashing a 25-yard rocket into the net.

And the celebration wasn’t bad either…

Throwback when Neymar scored a solo goal way outside the box pic.twitter.com/FnXa0KsIbf

The 2014-15 season saw Neymar take his goal tally to another level after a promising 2013-14 debut campaign brought 15 goals.

He grabbed his first hat-trick for the club in a match against Granada in September 2014 with three decent finishes. Neymar ended the season on 39 goals in all competitions for the Spanish giants. Woof.

The skilful forward was pivotal to Barcelona’s Champions League campaign that season and proved his class with three goals in the 5-3 aggregate victory over Bayern in the semi-finals.

Winning a Champions League final and scoring in it must be near the top of most footballers’ wishlists. Neymar did both in 2015.

The game was almost over at 2-1 after Ivan Rakitic and Luis Suarez had put Barca into the lead, but there was still time for Neymar to place the icing on the cake in the 97th-minute.

A neat one-two with Pedro ended with Neymar expertly slotting the ball past a helpless Gianluigi Buffon.

Neymar has scored a lot of goals for Barcelona, 105 in all competitions to be exact, but is this effort against Villarreal his best?

He controlled the ball with his midriff, flicked the ball over his head to beat a defender and volleyed the ball first time into the net. Simply exquisite.

Arch-rivals Real Madrid may have eventually gone on to win the 2015-16 Champions League but Neymar had his moment in the spotlight during the group stage.

The former Santos man had a hand in all six goals as Barcelona ran riot in a 6-1 Group E victory over Serie A side Roma.

He was involved in some outstanding build-up play for the first three goals, set up Luis Suarez for the fourth, catapulted into the area before teeing up the fifth and then won a penalty to round off an all-action display.

Despite all the silverware Neymar has won, his favourite story to tell the grandkids will probably be Barcelona’s 6-5 aggregate victory over PSG in the Champions League round of 16 in 2017.

Trailing 4-0 from the first leg, the Catalans faced an improbable task of overturning the deficit at Camp Nou.

An Edinson Cavani goal on 62 minutes made the scoreline 3-1 to Barcelona, meaning they needed three goals in 28 minutes to go through.

It wasn’t until the 88th minute that Luis Enrique’s side struck again, via a sumptuous free-kick from Neymar before the Brazilian scored again from the penalty spot one minute into added time.

A stunning performance from Neymar was complete when deep into injury time he turned provider to lay on a goal for Sergi Roberto. What. A. Match.

If you start watching Barcelona’s comeback against PSG from Neymar’s penalty at exactly 23:55:25 on New Year’s eve, Sergi Roberto’s volley will hit the back of the next at exactly midnight. Start off your new year right. pic.twitter.com/dc6VfG7KrR

READ NEXT: Where are they now? Barcelona’s five Neymar replacements from 2017