9 of Marouane Fellaini’s most crucial goals for Manchester United 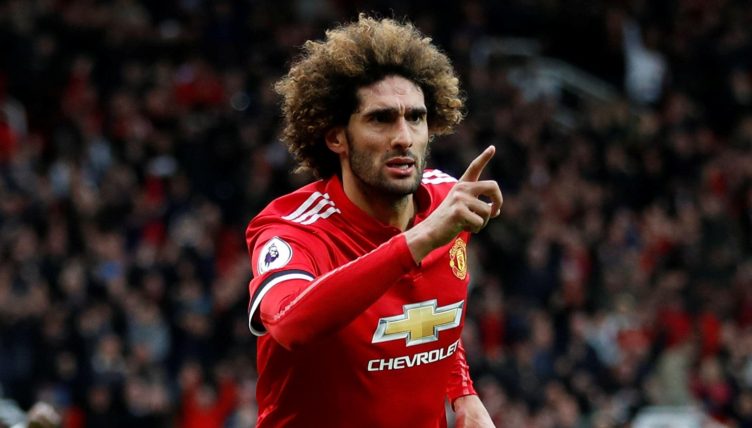 Marouane Fellaini is not everyone’s cup of tea as a footballer – but he lasted much longer and scored lots more crucial goals for Manchester United than many would have expected.

Fellaini scored a career-best 12 goals in his last season at Everton but failed to find the back of the net in his debut campaign at Old Trafford after making the move with David Moyes in 2013.

He proved to be an important player for both Louis van Gaal and Jose Mourinho, however, scoring several crucial goals along the way.

The Belgian’s only goal in a Manchester derby put United 2-1 ahead after 26 minutes after Van Gaal’s side had fallen behind to an early Sergio Aguero strike.

The eventual 4-2 victory remains United’s most emphatic over their city rivals since 2010.

The goal all but confirmed that United would return to the Champions League, the Red Devils going on to finish fourth in Van Gaal’s first season in charge.

The 78th-minute winner was Fellaini’s seventh of that season, but it’s the first that can be pinpointed as the inception of his status as a late firefighting option.

In the 14/15 Premier League season, after Crystal Palace equalised a Juan Mata penalty, it took yet another late Fellaini header to save Man Utd from another embarrassing performance in the Louis Van Gaal era. pic.twitter.com/tNdS8euBaE

After providing crucial goals in the league as United qualified back for the Champions League, he also provided an important contribution in the qualifier against Club Brugge with the final touch of the game.

A brace from Memphis Depay had already put them ahead after conceding early through a Michael Carrick own goal. But the third from Fellaini, scored in the 93rd minute, ensured that they could breathe easier for the second leg in Brugge.

The goal prompted Van Gaal to use him as a striker at times that season.

Converting Anthony Martial’s cutback, this was Fellaini’s first goal at Wembley and the only goal of the game as they knocked out his former club to make the final against Crystal Palace.

It was vital to the club winning their first trophy since Sir Alex Ferguson retired, ending a three-year drought.

Once again Fellaini popped up to provide an important goal en route to the second trophy of the post-Ferguson era, the League Cup win under Mourinho in 2017.

Hull would go on to be relegated that season but proved dogged and determined under Marco Silva as they made a fight of it in the latter half of the season. Qualities they showed in this tight and competitive two-legged semi-final.

Fellaini providing the second goal in the first leg of the semi-final would prove decisive as Hull would win the home leg to make it 3-2 on aggregate.

A theme emerges. If Fellaini scores in a semi-final, United are winning the trophy, having done so in all three of the trophy wins since Ferguson retired.

This early opener at Old Trafford sent United two ahead on aggregate against Celta Vigo, and once again Fellaini looked like a classic No.9 as he headed in the cross from deep.

They were later pegged back and had to withstand several late scares to set up the final against Ajax.

United had little to play for in the league at this point, but this late winner ensured that Arsene Wenger would suffer a miserable final visit to Old Trafford as Arsenal manager.

Once again it was Fellaini on the end of an Ashley Young cross.

In Arsene Wenger’s last PL game at Old Trafford 17/18,it looked like it would be a stalemate after goals from Pogba for utd, and Mkhi for Arsenal.However, thanks to Fellaini’s last minute winner, Mourinho got one over Wenger again,while utd secured a top 4 finish and CL football. pic.twitter.com/916Ijp5yvw

Mourinho’s men would go on to lose the penalty shoot-out in the end, but this late, late goal set it up to give United a chance of progressing past Derby. Injury time, deep cross, six-yard box. You know the rest by now.

Saving a result after a turgid display is Fellaini’s calling card. He’s football’s get out of jail card.

His third consecutive goal scored in injury time, once again this was of real consequence as it sent Manchester United through to the Champions League knockout stage, ensuring they wouldn’t need to travel to the Mestalla and pick up a result against Valencia.

It inspired Mourinho to chuck a load of water bottles and was the first goal Fellaini had scored without his afro, confirming he wouldn’t lose his powers ala Samson.