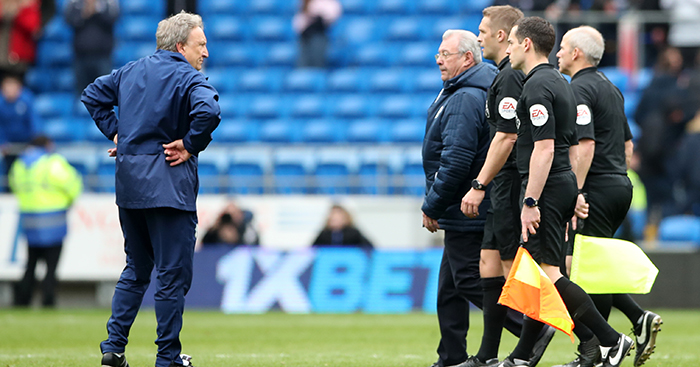 Anagram fans had been referring to Neil Warnock as ‘Colin’ long before he ever arrived at Cardiff City – and there have been plenty of instances over the years when it’s not hard to see why.

Warnock is the sort of manager you love when he’s fighting your corner but absolutely hate when he’s fighting for the opposition. Although he’d probably argue with himself if he was stuck in an empty room, such is his willingness to go in two-footed on anyone and everyone who crosses his path.

Plenty of people will dislike him for it, but football needs its anti-heroes and nobody could argue Warnock isn’t fantastic entertainment. We even named him as the Premier League manager we’d most like to go for a pint with. Here are just some of his highlights.

When Warnock’s QPR took on Blackburn Rovers in January 2011, QPR’s Jamie Mackie suffered a broken leg in a challenge with Gael Givet, and Warnock was understandably not happy with Diouf berating the forward as he lay stricken.

“I’d call him a sewer rat, but I don’t think he’s as good as that, I think that’s insulting sewer rats,” Warnock said after the game.

Just 19 months later, Warnock had seemingly forgiven the Senegal striker, signing him for his new club, Leeds United. Either that or ‘sewer rat’ was always meant as a compliment.

Back in the 2006-07 season, when Warnock was in charge of Sheffield United, much of the chat and controversy surrounded West Ham and Carlos Tevez, but there was another strand to it all.

Liverpool rested a few first-teamers against fellow strugglers Fulham, helping the London club pick up the victory which ultimately sealed their survival, prompting Warnock to complain both at the time and a year on, saying: “It’s part of a big club’s mentality. They look after themselves and they don’t bother about anyone else.”

In fairness to Liverpool and then-boss Rafa Benitez, they did have the small matter of a Champions League final to prepare for at the time.

Of course, that Sheffield United team might not have even been in a position to complain about Premier League managers if it wasn’t for Warnock and his distinct style of man-management.

We saw this during their Championship days, specifically after Joleon Lescott scored a late equaliser to earn Wolves a point in a 3-3 draw with the Blades at Bramall Lane in 2004.

United’s centre-back pairing of Chris Morgan and Phil Jagielka were a big part of their rise to the top-flight, but on this occasion Warnock was fuming at the defenders.

Morgan has always struck us as the kind of player who’ll give as good as he gets, but that didn’t matter to the manager on this occasion.

Neil Warnock having it out with Chris Morgan and Phil Jagielka…. 😳😳😳 pic.twitter.com/6X3UR3zwo1

Chris Kirkland and the fan

When Sheffield Wednesday goalkeeper Chris Kirkland was attacked by a Leeds United fan during a Yorkshire derby in 2012, the obvious response would be to sympathise with the England international.

Neil Warnock, however, has never been one to go down the obvious route.

Warnock was in charge of Leeds at the time, and in a post-match interview he suggested Kirkland had gone down “like a ton of bricks”. Even if it were true, accusing an opponent of diving after being attacked by a fan isn’t likely to earn you much support.

To Warnock’s credit, he later backtracked on the comments, claiming he was simply repeating what he’d been told. The damage had arguably been done, though.

Telling Gary Lineker to f** off

Picking a fight with Sol Bamba

The concept of ‘a fair fight’ is relatively fluid within football, but there’s no circumstance where a battle between Neil Warnock and Sol Bamba would fall into that category.

Well, maybe if Bamba had both hands tied behind his back, but even then you’d probably fancy the Ivorian.

This incident occurred in the first half of Warnock’s first season at Cardiff, when the Bluebirds were in the bottom three and Bamba’s red card at Ipswich was in danger of costing his team a vital point.

As the centre-back left the field, there was a clash with his manager which threatened to get extremely feisty. All seemed to be forgiven the following year, though, when Warnock claimed Bamba was a better defender than Virgil van Dijk.

There’s more than one running joke about which Premier League manager is the most Brexit, and often it’s borne out of little more than lazy stereotypes, but in Warnock’s case there’s actually some evidence.

“I don’t know why politicians don’t do what the country wanted,” Warnock said. “They had a referendum, and now we see different politicians and everybody else trying to put their foot in it with Theresa instead of getting behind her – why did we have a referendum in the first bloody place?

“I can’t wait to get out [of Europe] if I’m honest, I think we’ll be far better out of the bloody thing, in every aspect. To hell with the rest of the world, eh?”

The Battle of Bramall Lane

Perhaps the pinnacle of Warnock-as-Colin behaviour came in the 2001-02 season. The eight years he spent in charge of Sheffield United represents the longest continuous managerial stint of his career, so it seems only fitting that this incident – close to the middle of his tenure at the Yorkshire club – stands out.

It’s hard to tell what’s more noteworthy, the manner of United’s three red cards that day or the general shithousery, but they all make for a wonderful cocktail in combination with one another.

The first red card came less than 10 minutes in when Blades goalkeeper Simon Tracey handled outside his area, and it was still United’s 10 against West Brom’s 11 when Warnock threw on Georges Santos and Patrick Suffo in an effort to chase the game.

To lose one of those subs due to a senseless act of violence within two minutes is careless, but when both players are dismissed you have to wonder what’s going on.

Santos piled into Andy Johnson to earn a straight red, with Suffo getting his marching orders for headbutting Derek McInnes in the fracas which followed.

That was Sheffield United down to eight, and Michael Brown and Rob Ullathorne both went down injured with the game already lost, prompting referee Eddie Wolstenhome to abandon the game.

Warnock was a bit more magnanimous after the game, insistent West Brom needed to be given all three points, but one wonders whether he was given a nudge in that direction before making the comments.

An unusual change of tactic from Warnock after Chelsea’s controversial 2-1 victory at Cardiff, in which the officials failed to disallow Cesar Azpilicueta’s header despite the defender being clearly offside.

Rather than stick to his tried-and-tested method of giving the referee and his assistant a mouthful, Warnock instead just stood and gave them an eyebrowless stare for a good few minutes, as if he’d walked into the kitchen only to forget what he went in there to get in the first place.

Neil Warnock's stare down with the officials at full time 😨😨

Glad we're not the referee or linesman right now 😬 pic.twitter.com/026qLMpgL5

There are too many other ‘Colin’ incidents to mention, but thankfully someone was kind enough to put them all in one place for us. Isn’t that nice?