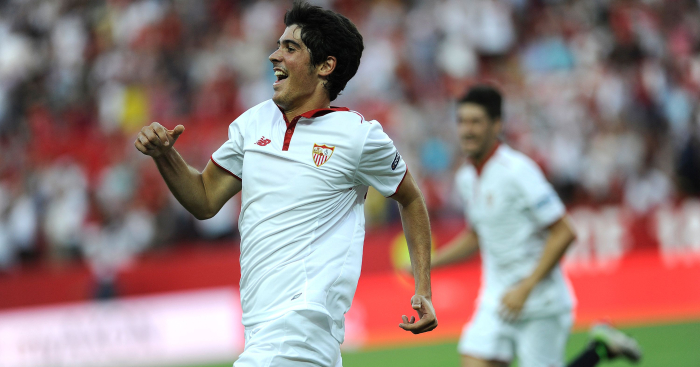 Football Manager 2019 is released this week and, having played the Beta for a couple of weeks, we have already found some of the best bargain buys on the game.

We’re old enough to know better, but signing an unheralded, unknown player for a low fee and watching him develop on Football Manager still gives us a buzz.

Fernandez starts the game on loan at Deportivo but can be bought for around £3.3 million – an absolute bargain price for a centre forward. 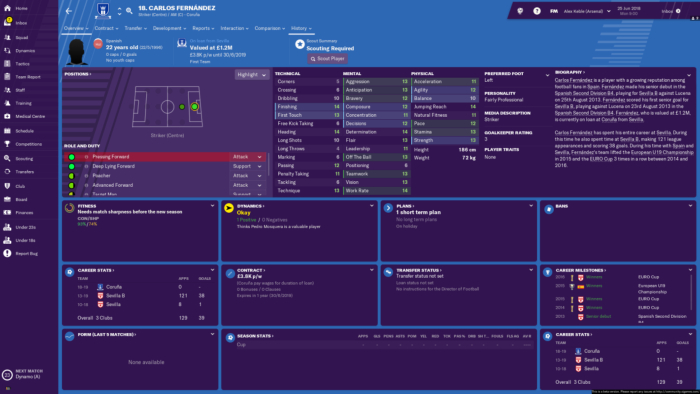 Another player with a wide range of 12s and 13s, Assane Gnoukouri is available on a free transfer and therefore is well worth picking up as a squad player.

It can be difficult to find useful, cheap defensive midfielders that aren’t too old to play with consistency, and so 21-year-old Gnoukouri is a good find.

The Ivorian has a lot of potential to develop, too, although those technical attributes won’t ever read well. 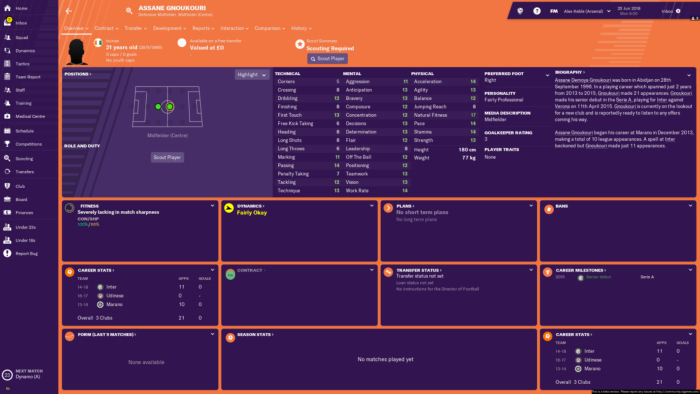 Brazilian midfielder William Maranhao, 22, is a considerably more rounded payer than Gnoukouri and should be available for around £62,000 from Brazilian club Boavista.

His natural fitness (14), strength (14), work rate (13) and tackling (13) are solid statistics for a lower-end Premier League player, while Maranhao is young enough to be retrained as a centre-back – a role for which he possesses ideal attributes. 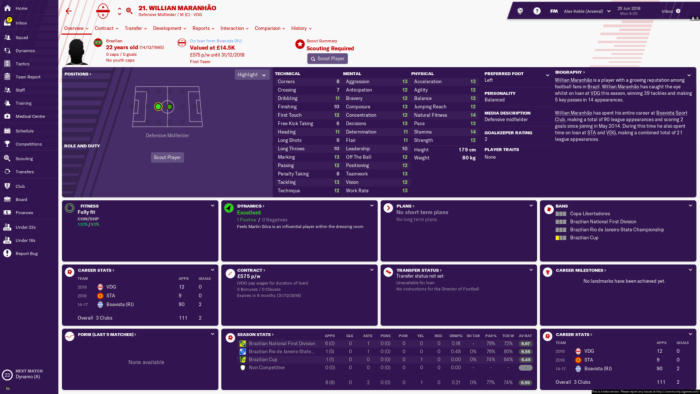 The young Serbian goalkeeper Predrag Radjkovic has been a hidden gem on Football Manager for several years, and although in that time his potential rating has dropped the 22-year-old is still a solid Premier League player.

It will cost as much as £5million to prise him away from Maccabi Tel-Aviv, but Radjkovic’s resale value will grow significantly over the first 12 months. 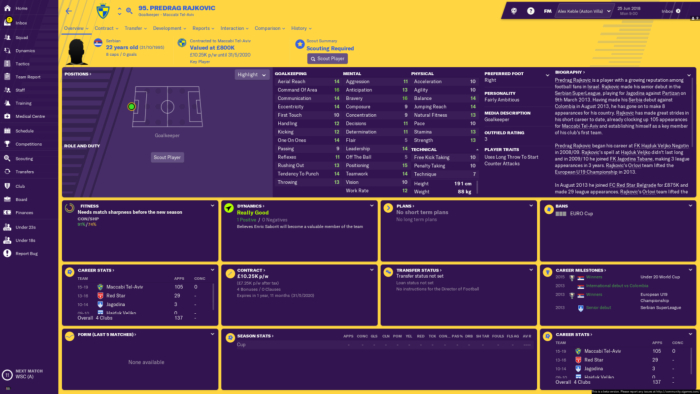 Another Football Manager favourite in decline, Guillermo Varela is surprisingly useful as a defensive right-back for Premier League clubs.

Varela, available for a £2.4million release clause, also has the bonus weapon of long throws (16). 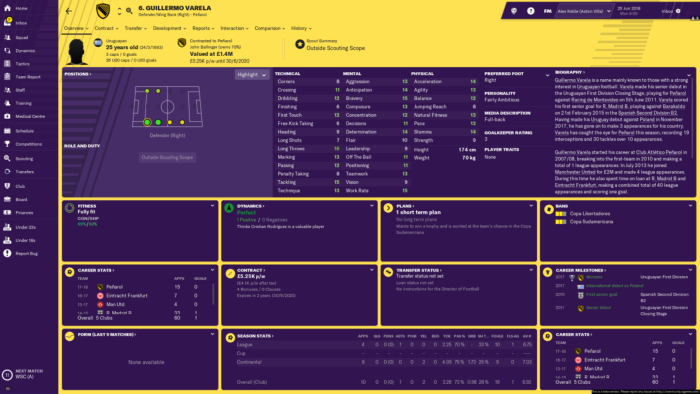 At £6million, signing Brenner might not feel like a bargain at the time (the 18-year-old isn’t going to walk into your first team) but within two years the Brazilian develops into a world-beating striker, as the picture below shows.

He is easily the best wonderkid on the game at that price, although lower Premier League clubs might not be able to afford him straight away. A £12 million release clause usually stays intact for the first two seasons of game play. 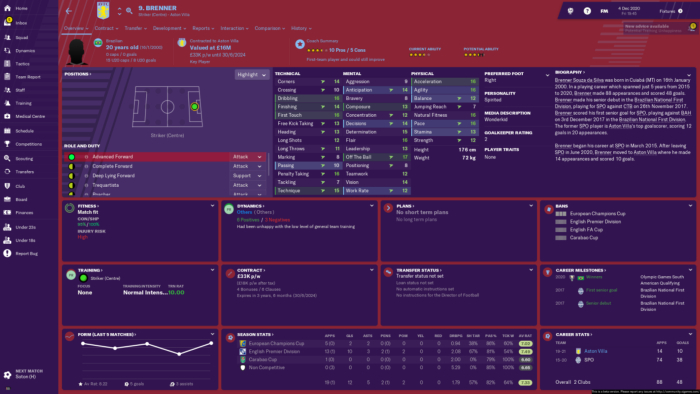 There really aren’t many good free transfers on FM19, but one you’ll keep coming back to is the 33-year-old former Leicester City centre-back: his pace (11) is the only attribute that stops him from still being a top player.

Huth’s raw defensive stats are excellent – heading (17), tackling (17), strength (17) – while his leadership (15) and experience ensure he will become a vital ally in the dressing room. 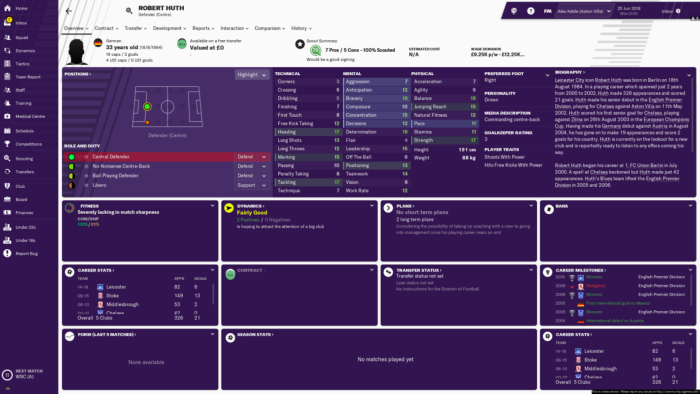 Zenit St. Petersburg’s 25-year-old central midfielder is arguably the only bargain to be found on the transfer list at the beginning of Football Manager 2019.

He has superb mental and physical attributes, such as stamina (16), teamwork (16), and concentration (18), while his passing (13) and first touch (12) are just about good enough for a no-nonsense anchor man.

His wage demands are pretty high, so a loan move might be the best solution. 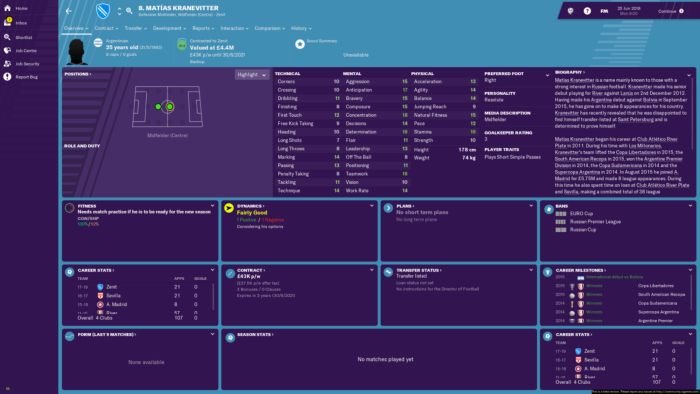 The former England right-back is surprisingly without a club but very much capable of playing Premier League football. The main thing to look for in a full-back is statistical balance in lots of areas, which is why a player like Johnson – with 25 attributes 12 or above – is a rarity.

Poor stamina (7) will let you down over time, but as a stop-gap Johnson is a highly competent defender. 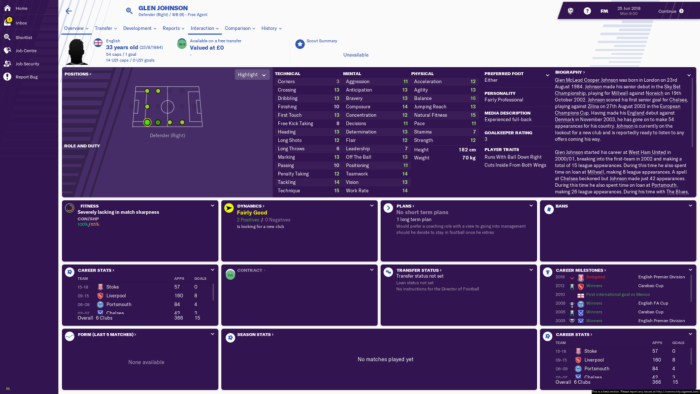