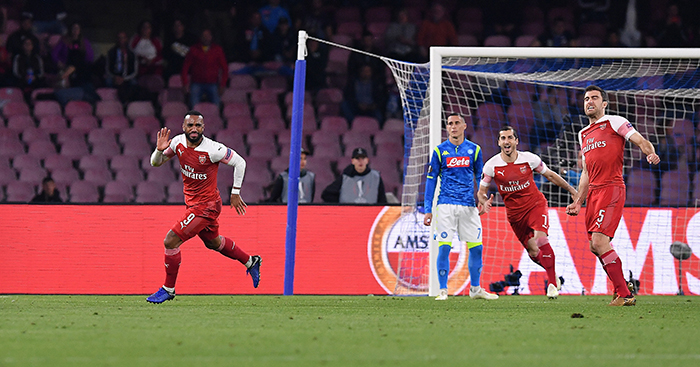 Arsenal made it through to the semi-finals of the Europa League with a 1-0 win at Napoli on Thursday night as their recent run of great form continued.

Having won the first leg of their quarter-final 2-0 a week previously at Emirates Stadium, Arsenal completed the job with surprising ease in Italy to set up a meeting with Valencia in the last four.

It was their sixth win in seven games and part of a run which, as well as extending Unai Emery’s incredible record in the Europa League, has also seen the Gunners climb back into the top four of the Premier League, just a point behind Tottenham.

Arsenal have regularly been accused of having a soft underbelly over the years, but they have kept six clean sheets from those seven games, conceding only one goal.

In fact, despite a tough run of fixtures which has seen them face Manchester United, Rennes, Newcastle United, Everton, Watford and Napoli twice, the only player to score against them over those seven games was Phil Jagielka.

The home and away victories over Napoli represent a particularly impressive feather in Arsenal’s cap. The Serie A side are second only to Juventus in Italy and had previously lost only one game all season, predictably to Juve, at Stadio San Paolo.

But the Gunners did not just beat them, they did so easily. In fact, over the two legs, Napoli were flagged offside more than three times the amount they managed a shot on target, calling Petr Cech into action only four times but seeing the assistant stop them in their tracks 13 times.

In fact, Emery’s men found it so easy in Naples that Nacho Monreal was able to leave the pitch for fully five minutes to have a sh*t. The disrespect!

The Napoli game was Emery’s 50th in charge of Arsenal, and the 32 wins he has overseen is more than any other manager in the club’s history has recorded from their first half-century of games.

George Allison, who managed Arsenal between 1934 and 1947, is second on the list with 28, with George Graham and Herbert Chapman one behind on 27. Arsene Wenger won 23 of his first 50 games at the club.

Emery is also, of course, unrivalled in the Europa League. He won the tournament three years in a row with Sevilla between 2014 and 2016 and now has 26 knockout-stage wins to his name.

But with his previous experience of the competition and Arsenal currently in the top four of the Premier League, fans will no doubt be hoping Emery will be leading his team to success in the Champions League next season.

Lacazette on a roll

In Alexandre Lacazette, Emery certainly has a player to thank his predecessor for.

The France striker scored the only goal in Naples, becoming the first Arsenal player to score a direct free-kick in European competition since Thierry Henry against Roma in 2002-03, and he has consistently proven himself as a man the Gunners can rely on.

In fact, since his debut for the club in August 2017, Lacazette has directly contributed to 46 goals in all competitions (33 goals, 13 assists), more than any other player in that time.

Even more impressive than those numbers, though, is the list of clubs the 27-year-old has scored against. As well as Napoli, he has notched against Manchester United, Tottenham, Chelsea, Liverpool, Manchester City and Atletico Madrid, showing himself to be a man for the big occasions.

And with more of those to come before the end of the season, Lacazette will have the chance to improve his record even more.