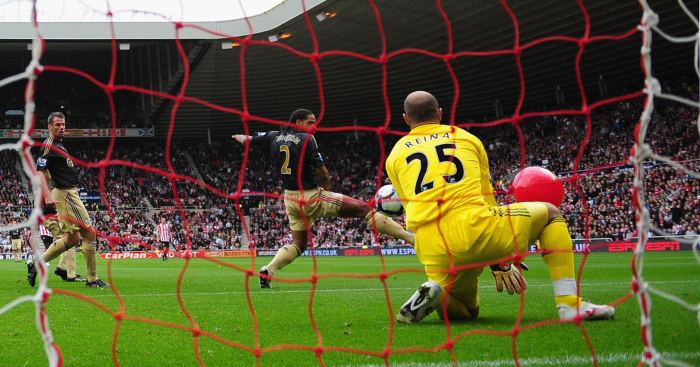 Whether they be crucial goals, wonder goals or own goals, our minds store a tremendous amount of goals we’ve seen over the years. And there is another type of goal we never forget: weird goals.

Wonder goals are fun, sure, and own goals are never not funny, but both types of goal happen more or less every single weekend. It’s great whenever another one goes in, but they’re ten a penny.

Weird goals, however, are often completely unique and like nothing we’ve never seen before. And that is what makes them special.

Divock Origi has scored a fair few goals in his young career, but none weirder than his last-minute winner in the Merseyside Derby.

The Belgian headed (well, shouldered) the ball in from a yard out after Everton goalkeeper Jordan Pickford made a real hash of a Virgil van Dijk volley which looked like it was floating over the bar.

Still, while it might be the strangest goal of Origi’s career, it certainly didn’t stop him celebrating…

The pinnacle of the weird goal genre came in 2009, and this time Liverpool were on the receiving end.

Bent’s shot for Sunderland didn’t look like troubling Pepe Reina, and the goalkeeper would surely have made the save were it not for a beach ball wrong-footing the Spaniard.

The best part, of course, is that Reds fans were responsible for the beach ball being on the pitch in the first place.

The first rule of goalkeeping is to always have a firm handle on your surroundings. It’s an area where Pickford let himself down, but not as dramatically as Shay Given back in 1997.

After claiming a high cross, the Newcastle United keeper looked in front of him, from left to right and back again, but crucially not behind him.

If he’d turned around he’d have spotted Coventry striker Dublin before it was too late.

We haven’t been able to find a video for this one, so you’ll have to trust us when we say it’s the closest thing the Premier League has had to the Origi goal outside of Merseyside. Or should that be Youl have to trust us?

Southampton striker James Beattie took a swing as a corner and his attempted clearance went straight up into the air. Keeper Paul Jones confidently watched the ball over the bar, or at least thought that’s what he was doing, only for it to land almost on the line where Mawéné was waiting for a tap-in. 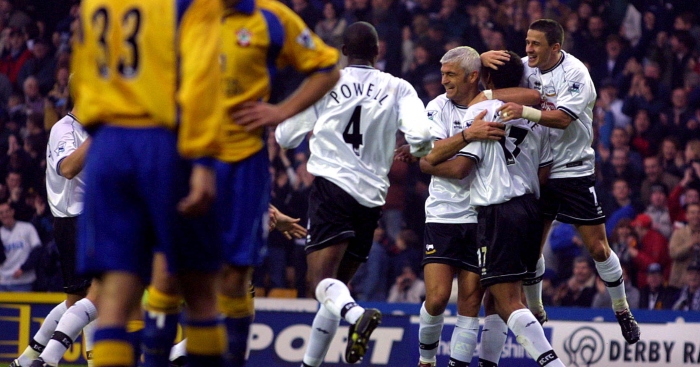 We’re pretty sure Rovers goalkeeper Tim Flowers is blameless for this one. In fact, he should be furious.

As he bends down to collect Collymore’s tame shot, a ghost nudges the ball over his shoulder and into the back of the net – at least that’s the only explanation we can think of.

This wasn’t even the only goal of its kind the Reds scored in the mid-90s. Oh, and before you go complaining about the Anfield pitch, this was at Ewood Park, and Steve McManaman’s carbon copy came at White Hart Lane.

Was this goal a fluke or an individual error? In a sense, it was both and neither.

There’s an argument that Olof Mellberg should have done what all defenders to and ensure the ball back to the goalkeeper isn’t on target, but also… it’s a throw-in.

Yes, it wouldn’t have been a goal if Enckelman hadn’t taken his eye off the ball, but also his lack of a touch on the ball means it shouldn’t have counted at all, given you can’t score direct from a throw. We’re not sure what to call this one other than ‘weird’.

Jason Cundy didn’t score a lot of goals in his career, but he did make a lot of tackles.

It makes sense, therefore, for his most famous goal to have been a tackle so forceful it sent the ball flying 40 yards over Ipswich goalkeeper Craig Forrest.

Forrest might have conceded 16 goals in two trips to Old Trafford with different clubs, but this goal probably left him scratching his head more than any he let in against Manchester United.

The old cliché about a footballer needing one to go in off his backside to break a scoreless run isn’t always accurate – sometimes it can smack in off his face.

Antonio had yet to open his West Ham account when Southampton came to Upton Park in December 2015, and had been restricted to substitute appearances until an injury crisis gave him his opportunity earlier that month, but it turns out all he needed to do was head the ball in from on the ground.

The winger scored again in the very next game, and would end the campaign with nine goals. He definitely knew what was going on for eight of them.

Not a Premier League goal, sure, but it felt wrong to leave it out altogether.

Javier Hernández has scored goals with his right foot, left foot and head during a productive career, but most have – at the very least – been classifiable as ‘deliberate’. Kicking the ball into his own face and over the line probably doesn’t quite fall into that category.

Yes, it arrived in the Community Shield, but we’re putting it in here and you can’t stop us.