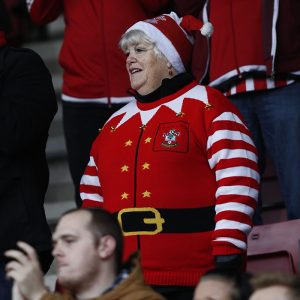 Southampton fans, one in a Santa Claus jumper, applaud the fans ahead of the English Premier League football match between Bournemouth and Southampton at the Vitality Stadium in Bournemouth, southern England on December 18, 2016. / AFP / Adrian DENNIS / RESTRICTED TO EDITORIAL USE. No use with unauthorized audio, video, data, fixture lists, club/league logos or ‘live’ services. Online in-match use limited to 75 images, no video emulation. No use in betting, games or single club/league/player publications. / (Photo credit should read ADRIAN DENNIS/AFP/Getty Images)