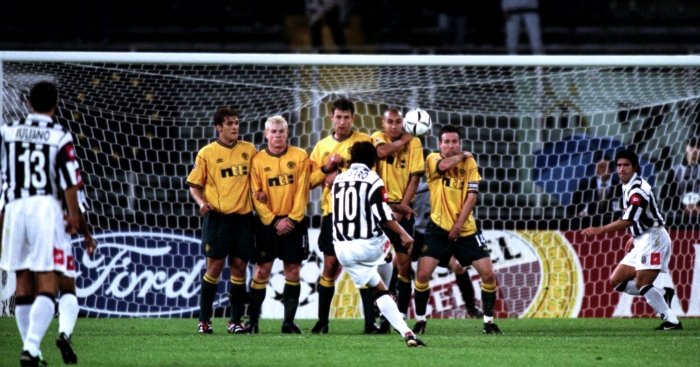 Celtic may no longer have the spending power of their counterparts south of the border, but there was a time when they could compete with anyone for top talents.

They were often successful, too, bringing stars like Henrik Larsson and Shunsuke Nakamura to Glasgow, but on other occasions they missed out on players who would go on to excel elsewhere.

We’ve found nine of those nearly-men, and the alternatives identified by the Bhoys didn’t always come good.

Looking for an exit from France in 1995 after being made a scapegoat for the country’s failure to reach the 1994 World Cup, Ginola would later say, “I had the pen in my hands,” after being given a tour of Glasgow by manager Tommy Burns. However, when alerted to Newcastle United’s interest, the Paris Saint-Germain midfielder decided he’d rather play in England.

Later that summer, Burns would swoop for Denmark international Morten Wieghorst. And, to be fair, the former Dundee man made a decent fist of things until a diagnosis of Guillain-Barré Syndrome slowed his progress.

Still, one wonders what impact Ginola, who almost helped Newcastle to Premier League glory in 1996, might have made north of the border.

In 2016, Gordon Smith recalled a conversation he had with Martin O’Neill 15 years prior, during which he recommended the Celtic manager pick up a talented teenager from Malmö for a bargain £2million.

However, as Smith tells it, the manager dithered for too long and Ajax stole in to sign the youngster, though Celtic did at least get a small amount of revenge by eliminating the Dutch side from the Champions League.

With a move for the Swede ruled out, Celtic moved for John Hartson in the summer window. They can console themselves by knowing they’d have probably only got a couple of years out of Zlatan anyway.

In the summer of 2001, when Hartson arrived from Coventry City, Celtic also signed winger Momo Sylla from St Johnstone. The Guinean had played with Didier Drogba at Le Mans and was asked by his former team-mate about a potential move to Parkhead the following summer, only to warn Drogba he’d have no chance of breaking into the first team.

The Ivorian instead stayed at Guingamp, scoring 17 times as his team rebounded from a relegation battle the previous year to fall just short of Champions League qualification.

Celtic’s only attacking signing that summer was David Fernández, who said upon signing: “It is a big chance for me and the best moment of my career as this is the best club in Scotland and they will be playing in the Champions League.”

The Spanish striker was an unused sub as Celtic lost in the Champions League qualifiers to Basel, and his only goal for the club came in a UEFA Cup victory over Lithuanian side FK Sūduva.

In the summer of 2004, Rivaldo was looking for a new club after leaving Cruzeiro, and Celtic’s allure of Champions League football had appeared to put them in the driving seat.

However, things turned sour when the Brazilian’s representatives reacted poorly to being asked to undergo a trial, with Carlos Arime saying: “How dare Martin O’Neill ask Rivaldo to go for a trial in America. That is an insult to my client and to football?”

With Rivaldo instead opting for Olympiakos, Celtic moved for a different member of Brazil’s 2002 World Cup squad instead, but Juninho didn’t impress all that much after arriving on a free from Middlesbrough.

Coleman proved to be a steal when he joined Everton for just £60,000 back in 2009, but they faced competition from Celtic, with the Bhoys even taking the right-back on trial before deciding it wasn’t worth handing the then-20-year-old a permanent deal.

That same summer, the Bhoys opted to bring in another talented young defender in the form of England Under-19 international Josh Thompson. However, the former Stockport man played just 21 times for the club before dropping down the leagues, and has been without a club since 2018 after some injury woes.

Another player on Celtic’s shopping list in 2009, Valero was thought to be in line for a reunion with Tony Mowbray after playing under the manager at West Bromwich Albion. The move never transpired, though, and the Spaniard spent two years on loan in his home country before reviving his career with Fiorentina and Inter in Italy.

One central midfielder who Celtic did sign in that window was Landry N’Guémo, but the Cameroonian only stuck around for one year on loan as the Scottish club was unable to match Nancy’s demands to make the move permanent.

They did at least sign Ki Sung-yueng the following January, though, and that turned out a little better.

Completing the 2009-10 trilogy was Olivier Giroud, a man who has done pretty well since a £2.5million move to Parkhead failed to come to fruition in the winter transfer window.

At the time, he was down in Ligue 2 with Tours, a long way away from his role in his country’s 2018 World Cup triumph, but Celtic couldn’t get the move over the line and by the summer he was on his way to Montpellier.

Celtic instead picked up another target for half the price, but Morten Rasmussen has no World Cup medals at the time of writing. He also has no club, having left Enosis Neon Paralimni after the Cypriot club narrowly avoided relegation in the 2018-19 season.

Boly might have taken the long way round before arriving in the English Premier League, but a move to Scotland in 2012 might well have accelerated that path. After all, Virgil van Dijk had just two years at Celtic Park before heading south.

Meanwhile, Boly was reportedly close to a move to Scotland following Auxerre’s 2012 relegation, only to stay in his home country.

While he opted for Ligue 2 before eventually arriving in Wolverhampton via Portugal, Celtic got their chequebook out for… Efe Ambrose. Hmm.

The summer of 2012 also saw the Bhoys linked with Alessandro del Piero and, while the Italian’s best days were behind him, you feel he could have still got fans off their seats for a year or two.

Sadly for the people of Glasgow, though, those fans ended up being Sydney FC supporters as Del Piero opted for a move Down Under.

Celtic decided instead to loan in Venezuelan forward Miku, who does at least have one thing in common with Del Piero – both players went on to play in the Indian Super League.

Yeah, that’s probably not a connection to boast about, is it?