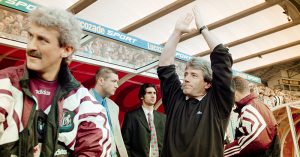 NEWCASTLE-UPON-TYNE, UNITED KINGDOM – MAY 05: Newcastle United manager Kevin Keegan applauds the fans whilst Terry McDermott (l) Steve Howey (2nd l) and Paul Kitson (3rd left) look on after the 1-1 draw in the FA Carling Premiership match between Newcastle United and Tottenham Hotspur at St James’ Park on May 5, 1996 in Newcastle, England, the result confirmed ‘the ‘Toon’ as Premiership runners-up for the 95/96 season after leading the league for much of the season. (Photo by Clive Brunskill/Allsport/Getty Images)