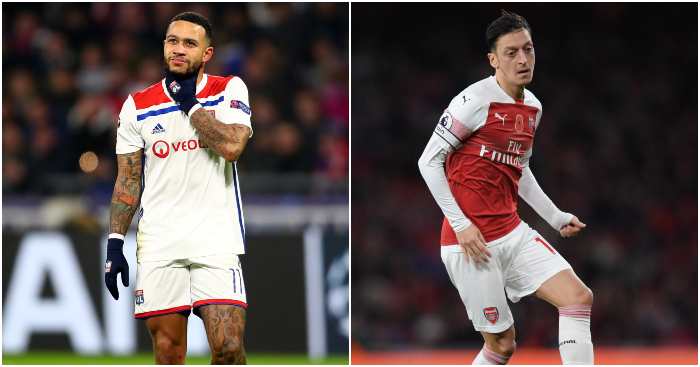 Former Manchester United, Chelsea, Liverpool and Arsenal men are among the players whose old clubs retain a buyback option as part of their transfer.

Buyback clauses have been relatively uncommon in the Premier League until recent years, with Chelsea notably missing out on re-signing Romelu Lukaku and Kevin De Bruyne having failed to include such a stipulation when they departed the club.

We’ve taken a look at 11 players around Europe who have not completely closed the door on their former clubs.

“Because potentially he’s a very good player,” Jose Mourinho said in September when asked why Manchester United inserted a buyback clause in Depay’s £16million sale to Lyon in 2017.

“I think when Mr Van Gaal decided to buy him he did well, he knew him very well from the national team, he was very young when at the World Cup he had flashes of top quality.

“He was playing well in Holland, we know the Dutch league is not the same but he was showing very good things. So I think Mr Van Gaal and Manchester United did very well to buy him.

“He didn’t succeed in his 18 months but he’s very young so I think it’s important for the club to complete control of this talent and we all wish he plays very, very well at Lyon and why not to come back because everyone here likes him.”

A return to Old Trafford for Depay no longer seems as outlandish as it did when he first moved to Lyon, with the Dutchman having contributed 34 goals and 30 assists in 88 Ligue 1 appearances to date.

Documents from Football Leaks released in 2016 show Arsenal must notify Real Madrid if they intend to sell Ozil to another Spanish club.

Los Blancos would then have 48 hours to decide if they will match the offer, while they will be entitled to 33% of the profit if Ozil joins another Spanish club for over €50million.

There are a lot of ‘ifs’ there, mind.

Chelsea have already exercised one clause to ensure Ake returned to Stamford Bridge when recalling the defender halfway through a season-long loan at Bournemouth in January 2017.

The defender appeared just five more times for the Blues before Bournemouth signed the Holland international permanently in a £20million deal.

Now 24, Ake has continued to impress in the Premier League, and there would be far worse options for the west Londoners if they wanted to bolster their defence.

One for my #CFC fans, Nathan Ake – £40m buyback clause – would you have him back? Have a vote and RT, debating with my coach 😂 @StamfordChidge @Louis_Beneventi @ChelseaFanCast @CFCExtra @ChelseaPodcast @Chelsearory

One of the most exciting young players in the world right now, Sancho’s incredible form for Borussia Dortmund this season has been enough to prompt rumours of a £100million return to the Premier League.

Should any club have an offer for the winger accepted by Dortmund, Manchester City will have first refusal on the player if they are willing to match the fee.

It would probably be a good idea to do so.

Two years and three Premier League goals later, it seems like Liverpool definitely got the better end of that deal.

See above. Smith has appeared even less for Bournemouth than Ibe and found himself on loan at Seattle Sounders in MLS.

He’s probably not going to usurp Andrew Robertson at Anfield any time soon. Even Alberto Moreno hasn’t felt threatened by the spectre of Smith.

Januzaj’s rise to Manchester United saviour was only matched by his descent to forgotten man, meaning few eyelids were batted when the winger was sold to Real Sociedad in 2017.

The 24-year-old was in and out of the Spanish outfit’s starting XI last season, despite ending a two-year exile at international level – scoring a belter against England at the World Cup – and being linked with a move to Leicester.

Given he scored one La Liga goal last season, file this one under ‘unlikely’.

Chelsea beat off competition from Manchester United to sign Traore from Auxerre after the forward appeared for Burkina Faso at the Under-17 World Cup at the age of just 14.

However, a spell of four goals in five matches at the start of 2016 proved the player’s highpoint with the Blues, and he was sold to Lyon in 2017 after a successful season on loan at Ajax.

Playing alongside the aforementioned Depay, Traore scored 18 goals in all competitions in his debut campaign in France and followed that up with 11 in 2018-19.

While a return to Chelsea does not appear on the cards, a 15% sell-on clause suggests the Blues could still earn a tidy windfall, especially given they only sold the 23-year-old for £8.8million.

According to the Daily Telegraph, Leicester City managed to secure the signature of Iheanacho in 2017 ahead of the likes of Tottenham, West Ham and Monaco.

“It is an honour to work with him. It was not easy for him because I did not give him a lot of opportunities,” Guardiola said of the striker just before the transfer was sealed. “His behaviour, I’ve never saw a guy like him (before).”

He added: “We have an option to have the opportunity in a few years to bring him back. But he’s a young player and we believe he deserves to play. He needs to play at that age and that’s why him, the club and everybody, we decide what’s best for him.”

Even though his spectacular miss at the Etihad helped City pip Liverpool to the title, it seems unlikely Guardiola will be keen on activating their £50million buyback clause on the Nigeria international.

Barcelona are known for not only including buyback clauses but also often activating them, having re-signed Luis Garcia, Gerard Deulofeu and Denis Suarez in recent seasons.

Mina made just six appearances for Barca after joining in an €11.8million move from Palmeiras in January, but his performances for Colombia in the 2018 World Cup saw him attract plenty of interest.

Everton won the race to sign the defender in a £27million move over the summer, but Barcelona retain a £54million buyback clause on the 24-year-old.

Chelsea are hardly short of options in the centre of the park, with Mateo Kovacic, Ross Barkley and Ruben Loftus-Cheek battling for a place next to Jorginho and N’Golo Kante in 2018-19, so Chalobah should probably focus on breaking into Watford’s starting XI.