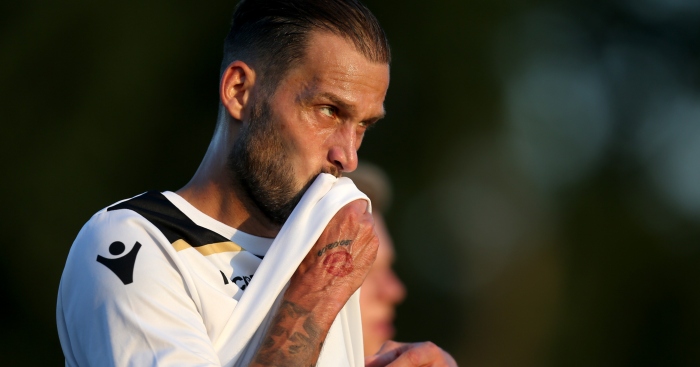 It’s easy to forget someone exists once they drop out of the major leagues – and former Manchester United, Arsenal and Aston Villa players are among those who you probably didn’t realise were still going in non-league.

Given the money swilling about in the Premier League, plenty of players decide there is no need to drop down the pyramid once htey fall out of favour at the top level.

There are some, however, who continue to play for ‘the love of the game’ away from the glitz and glamour of the Premier League and in non-league football instead – waterlogged pitches, cramped dressing rooms and all.

There are unconfirmed rumours that Roger Johnson ended up at Bromley once he had finally finished backing away from a rampaging Yaya Toure inside the Etihad Stadium.

Johnson signed for Bromley last October and been retained for the current campaign in the National Vanarama which suggests that his spell with the Ravens has gone much better than his time with Wolves.

We’d be shocked if even Julian Joachim himself could list every single one of his clubs if you gave him a minute to do so.

The former England U21 international has had no fewer than 19 clubs and played for two of those – Boston United and Holbeach United – twice.  One of his old clubs is called Quorn, as in the vegan treat.

Aged 43, Joachim signed for Precision Nottinghamshire Senior League outfit Aslockton & Orston in the summer after a short spell with Radcliffe Olympic of the same league.

If you support or have supported a Football League club, chances are you’ve had your weekend ruined by Jamie Cureton at least once.

He was regular goalscorer during the 90s, 2000s and 2010s for clubs such as Bristol Rovers, Reading and Colchester, and incredibly he’s still playing at 42, for Bishop’s Stortford in the Bostik League.

Always nice scoring on the opening day of the season ⚽️ stay on your line keeper #goals #football #338 #42 pic.twitter.com/zudSWrIvFQ

Parkin enjoyed a decent Football League and helped Stoke City win promotion to the Premier League in 2008, but it’s fair to say he was never considered the fittest player in any of the squads he was a part of.

Somehow, however, he’s still going at the ripe old age of 36, committing to yet another season after banging in 20 for York City in the National League North in 2017-18.

Doyley spent 14 years at Watford before leaving in 2015, and he obviously struggled to adjust to life away from Vicarage Road as failed spells at Rotherham and Colchester have led him to Hemel Hempstead Town.

There are a few notable names in their squad these days. Darren Ward, another former Watford player who once had the moniker ‘The Peckham Beckham’ is there at the age of 39 as is ex-Arsenal youngster Sanchez Watt and Teddy’s son Charlie Sheringham.

READ: Where are they now? Arsenal’s 49 League Cup youngsters since 2007

Fondly remembered for his iconic back-flip celebration that lit up Premier League stadiums during the mid-late 2000s, Congolese striker Lomana Lua Lua turned out for Tilbury in a friendly against Hashtag United.

Lua Lua sought Tilbury out after playing alongside their manager Joe Keith at Colchester United and even lined up on the same pitch as his teenage son Keenan, who played at left-back.

Although he’s now 37, you get the feeling that opposing defenders in the Bostik League would get used to seeing that backflip celebration a little too frequently for their liking…

Starting out at Manchester United, Ebanks-Blake was among those who got his first taste of senior football out on loan at Royal Antwerp.

He went on to impress for Plymouth and Wolves, winning the Championship Golden Boot two seasons in a row with the latter and going on to enjoy a couple of years in the Premier League.

He’s still only 32, but after failing to score a single goal in League One for Chesterfield or Shrewsbury in 2016-17 he moved to National League North side Telford United, joining Halesowen Town a year later to play up fron alongside former Notts County man Lee Hughes.

READ: Where are they now? The 29 players Man Utd loaned to Royal Antwerp

Marc-Antoine Fortune, of Celtic and West Brom fame, currently finds himself in the fifth tier of English football following his release from League One Southend United in the summer.

The Frenchman who has scored goals in the Premier League, Ligue 1, Eredivisie, Europa League, Championship and League One, signed a one-year deal with Chesterfield in early August.

It’s gone pretty well so far with Fortune scoring twice and providing one assist in his first five matches.

Looking to supply ammunition to Fortune this season will be ex-West Ham winger Zavon Hines, who is eight months into an 18-month deal with the Spireites after signing from Maidstone United.

Hines looked a real prospect when he broke through at the Upton Park during Gianfranco Zola’s time in charge – yes that really did happen – the Italian handing him 22 top-flight appearances for the Hammers.

The 30-year-old even played in a League Cup final after leaving West Ham, coming on as a substitute for Bradford during their 5-0 thrashing at the hands of Swansea in 2013.

Playing for Billericay Town is a sure-fire way of landing a gig on Celebrity Big Brother, it seems.

Former Tottenham and Portsmouth midfielder Jamie O’Hara appeared on the show in 2017 and his former team-mate at Billericay, Jermaine Pennant is on it this year, discussing with his housemates his threesomes with Ashley Cole, no doubt.

There’s been a bit of a big-name cull by Town manager Glenn Tamplin this summer, as Pennant, Paul Konchesky and Kevin Foley have all moved on. Jamie’s still there, though, so that’s something.