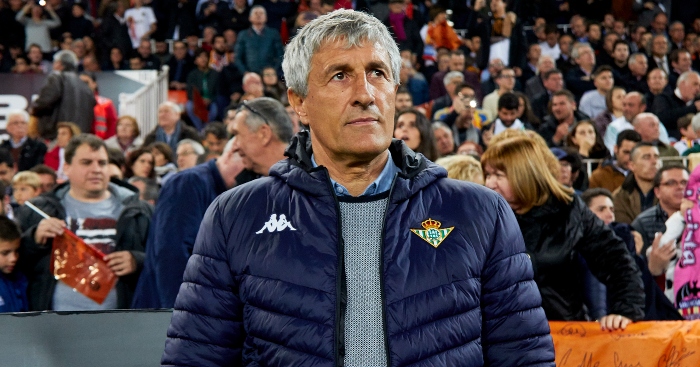 After sacking Ernesto Valverde, Barcelona have turned to former Real Betis boss Quique Setien, a name that is largely unfamiliar outside of his homeland.

Setien has agreed to a two-and-a-half-year deal at the Nou Camp, having earned plenty of plaudits in Spain for his work with Las Palmas and Betis.

We’ve taken a look at some of the most intriguing quotes about the 61-year-old from those that know him best – as well as from the man himself.

“I remember when Johan Cruyff’s Barcelona came along. You played against them, and you spent the whole match running after the ball,” Setien told the Coaches’ Voice. “I said to myself, ‘This is what I like. I would like to be in this team, and know why this is happening.’

“How can you get a team to have the ball permanently so that the opponent is running after it for the whole match? From then on, I started to make sense of what I had felt throughout life, through my career.

“I started to really watch football. To analyse it. To understand what I felt, and what I wanted to put into practice when I became a coach.”

Quique Setién says he likes his side to have control of possession because his players will be happier on the ball than off it ⚽ pic.twitter.com/ae5w3ke43z

“Setien for me is one of the best coaches I’ve ever had,” the former Barcelona defender, who worked under Setien at Betis, told the Daily Mirror.

“He doesn’t leave anything to chance. We know what to do on matchday, in training, with the ball and what we do in the game. This is really important for the players to feel confident.”

“The playing philosophy with which this new manager came has helped me a lot because I enjoy the game, I am in constant contact with the ball and I run a lot less,” the Real Betis captain told Panenka magazine.

“The team keeps winning and I am a lot more involved which makes me feel very comfortable.

“The reality is that this playing philosophy suits perfectly to any footballer who likes keeping the ball and it’s clear that my career has prolonged in many different aspects.”

“A three-hour flight from the peninsula, west of Africa, hot and sandy, a place where football is played with technique and flair, a sense of adventure and fun. Setién’s Las Palmas do that; few teams are as enjoyable to watch.”

“For Quique with appreciatetipn and admiration for your way of seeing football. A hug.” [@navidjaaan] pic.twitter.com/b3irEbV7HV

“I think I felt very comfortable and familiar with his philosophy from the start because at Betis, I’ve found similar playing patterns than ones I found in Barcelona,” Bartra told El Pais in 2018.

“I’ve been able to find similar pieces of training that I used to practice with Guardiola and also Luis Enrique. Suddenly everything became very familiar during the training sessions. So yeah, we could make an argument that Setien and Guardiola have similarities.”

“Quique has always been very much loved in the dressing room,” the former Real Betis defender, now at Barcelona, told Marca.

“In my case he was the one who practically gave me the opportunity to show just what kind of a player I am. He gave me the chance to play in La Liga.”

“Quique Setien tried to get Betis to play the Barcelona way. He was let down by a lack of striker,” the journalist tweeted upon Setien’s hiring.

“The team played that style even if the public did not have a desire for it and despite difficult periods. He has always shown his desire to be a Barcelona coach.”

“Quique Setien will be fervently focused on restoring the team’s famed fast-paced, high-pressing, incisive-passing style, which had been slowly eroded by the more pragmatic Valverde,” Spanish football expert West wrote for the BBC.

“Setien – whose stubborn nature makes him a divisive figure across Spain – is a devout disciple of Cruyffian football, and from now on it is certain that Barca will once again play ‘Barca’ football.”

“I have a motto, that I will never change my way of seeing things,” Setien told the Independent in 2018. “Sometimes, how I feel about football, it doesn’t matter if a team wins or loses. What attracts me to a match is whether the teams play well, that there are footballers, that it goes beyond the result.

“I’m a romantic, I like the football. I’m a spectator, and I don’t buy a ticket to watch a team stay stuck in their half waiting for a 0-0 or a counter-attack.”