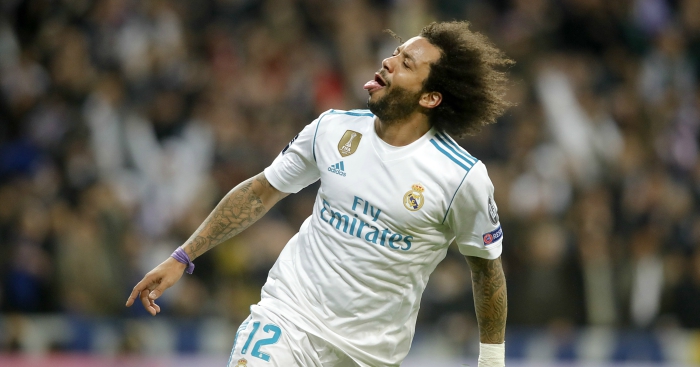 The Brazilian has now been at Real Madrid over 11 years, lifting 19 trophies on his way to being regarded as the best left-back in the world.

We absolutely love him, and we’ve put together a list of reasons why you should, too.

The pacey full-back shows his excellence when he gets the ball in front of him and can race towards defenders yet still have such tight control of the ball.

This goal against Galatasaray from a couple of years ago says it all.

Brazil manager Tite revealed in an interview that he was considering moving Marcelo into a midfield role for his country, and you can see why.

Some of the passes he plays are up there with the best midfielders in the world, including this piece of genius from last season.

During his early Real days, he was often deployed as a winger, which many, including AC Milan legend Paulo Maldini, attribute to his incredible abilities both attacking and defending.

“The rule is: if you cannot get back, you must not go forward, Maldini said. “The current best specialist is Marcelo, who gets it right in both areas.”

It also means that Marcelo is certainly not afraid to try and trick his way out of any situation (even if this is just a friendly).

The way Marcelo plays the game, you can tell he loves it but is also extremely determined and motivated.

And this clip just epitomises the Brazilian, celebrating blocking an Arjen Robben pass with a well timed slide tackle almost as if his team had just scored a goal.

Some defenders just don’t have the knack for scoring, but while Marcelo is quite content putting crosses in or finding the winger ahead of him, he also knows how to score a goal.

His goalscoring record isn’t bad at all for a defender, netting 31 goals in his 10 seasons at Real Madrid.

He also has six international goals to his name – his first of which came at White Hart Lane of all places, in a friendly against Wales – and here is his most recent, against Japan.

Water bottles are his kryptonite

Cristiano didn’t look too happy about having to sort this particular issue out.

Throwback to when Marcelo couldn't open his water bottle so Ronaldo had to do it 😂 pic.twitter.com/4b0VuUFL67

Marcelo arrived at Real Madrid as the heir to the great man’s left-back spot, and he truly took him under his wing.

From welcoming him and offering him constant support on his first day, to inviting his family to spend Christmas Day together, Marcelo often recalls how his idol gave him so much help in settling into his new surroundings.

And now, Carlos believes his fellow countryman is the best there is. “It is necessary to see, but now he is the best left-sided defender that there is in the world,” he said in a 2016 interview.

“I hope Marcelo is not better than me, but he is doing very well. Technically he is better; I was more power and punch.”

Roberto Carlos about Marcelo: "There's no doubt about it, he's the best defender in the world." (Marca) #halamadrid

He can let his, erm, hair down…

Marcelo posted this series of pictures last month of him enjoying himself while away in Brazil. Of course he dressed up as a woman.

Even his team-mates aren’t safe

Ok so we’ve definitely got used to skillful players arriving from South America, but that doesn’t mean we can’t enjoy them embarrassing their team-mates in a casual training drill.