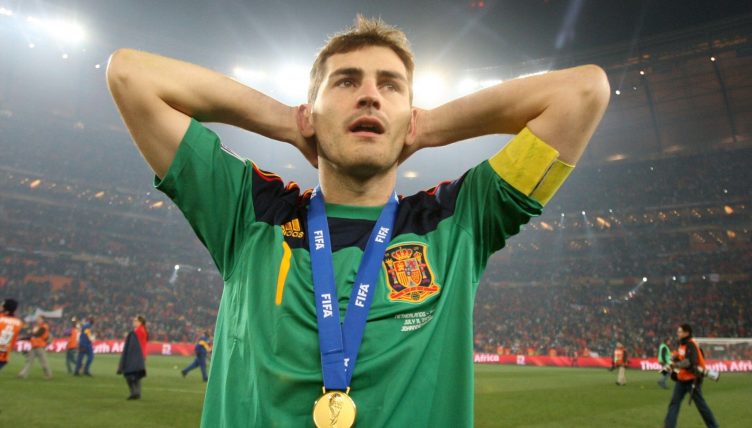 Iker Casillas was, without doubt, one of the greatest goalkeepers of all time – and he secured his place in the record books as one of a handful of players to have made 1,000 career appearances.

Casillas played for Real Madrid for over 15 years, captaining club and country during that period and playing alongside some of the world’s greats during the Galactico era.

It would be hard for a football fan to not appreciate the achievements of Casillas, and here are just some of the reasons why we all love him so much.

On April 2, 2008, in Porto’s match against Belenenses, Casillas brought up his 1,000th senior career appearance, joining an exclusive club including the likes of Peter Shilton, Roberto Carlos and Gianluigi Buffon.

Iker Casillas adds to his legend in playing his 1000th game of his pro career!

After Franz Beckenbauer and Didier Deschamps, Casillas became the third captain in history to lift the World Cup, European Championship and Champions League trophies when Real won the latter in 2014.

What is more impressive is that he lifted all three in the space of four years.

That Champions League victory in 2014 came just over a year after Casillas was ostracised from the Real Madrid squad by Jose Mourinho, with many criticising his treatment of the goalkeeper.

Ancelotti also left him on the bench for the majority of the 2013-14 campaign, but the Spaniard showed his class by becoming the first goalkeeper play in every round of the Copa del Rey up to the final without conceding a goal.

He then made 47 appearances in all competitions the following year, in what proved to be his last at the club.

Along with Raul, Casillas signed a “contract for life” at Real in 2008. Raul signed an initial three-year deal, while 26-year-old Casillas was handed a nine-year contract, with a reported £113million buy-out clause.

The pair signed deals which automatically extended beyond the contracted period if they played 30 times in the previous season.

“On this day, which is Valentine’s day, Iker, Raul and Real can say they love each other, they need each other, and complement each other and will commit for life,” Real Madrid president Ramon Calderon said.

In 2007, the goalkeeper insured his money-makers to the tune of €7.5million.

“If I damage my knee, I’ll pretend my hand hurts,” the Real Madrid star said at the time.

Casillas set up his own foundation, aimed at promoting education and development through sport, improving the health and lifestyle of young people who need it most, “through activities aimed at promoting gender equality, regardless of race or religious beliefs.”

Through partnerships with Aspire Academy, Real Madrid, BBVA, Samsung and many more, Casillas has done all kinds of good for young people and people suffering social exclusion.

Starting with wins in the FIFA World Youth Championship and the UEFA-CAF Meridian Cup back in 1999, Casillas enjoyed a terrific international career spanning Spain’s most successful era.

He is the most-capped Spanish footballer in history, making his debut just 14 days after his 19th birthday and going on to win an incredible 167 caps.

Winning two Euros and one World Cup, he was named in the team of the tournament for each of those, winning the Golden Glove at the 2010 World Cup in South Africa.

As well as his international success, Casillas has won La Liga five times, the Champions League three times, the Copa del Rey and the UEFA Super Cup twice, plus the Club World Cup and Intercontinental Cup once each.

Add those to four Spanish Super Cups and Casillas has 21 major trophies to his name.

He has also earned an impressive 30 personal honours, ranging from the Bravo Award in 2000, handed out by Italian magazine Guerin Sportivo to the most outstanding young player in Europe, through to the Golden Foot, which was awarded to him in 2017 in honour of his phenomenal career and personality.

Official: Porto goalkeeper and Real Madrid legend Iker Casillas has won the Golden Foot 2017, designed to recognise the long-standing achievements of players in terms of skills and personality, beating players like Messi, C.Ronaldo and L.Suárez to claim the award. Parabéns! pic.twitter.com/fKq4FxWcFB

Casillas holds a whole host of awards, including most appearances and clean sheets in the Champions League.

However, during the time when he was left out of the side towards the end of his Real career, perhaps his most impressive achievement was going 952 minutes on the pitch without conceding a goal, a record in Spanish football.

READ MORE: 9 reasons Iker Casillas will always be remembered as a football legend