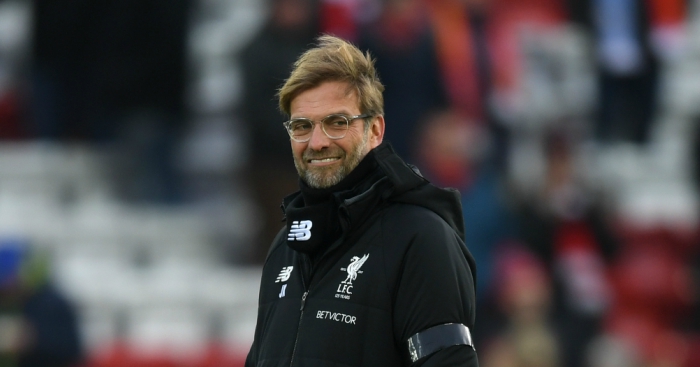 Jurgen Klopp once again had us laughing over the weekend, while we very much enjoyed the most ridiculous bit of refereeing we think we’ve ever seen.

It was another wonderful weekend of football, with Luis Suarez’s brilliant equaliser in Barcelona’s come-from-behind win at Real Sociedad certainly catching the eye, but goals are only a tiny part of the fun.

Including that Suarez pearler, here’s a selection of things that caught our eye over the weekend…

Not content with moving above Samuel Eto’o in Barcelona’s list of all-time top goalscorers, Suarez is now stealing the former Cameroon international’s finishes.

What a world class finesse from Luis Suarez. Brilliant. pic.twitter.com/xRU1AvLace

We’re quite into just how much of a power trip referee Tony Chapron had at the weekend. Absolutely wonderful.

Have you ever seen a referee kick a player AND then send him off?! 🔴

"It'll be interesting to see how he gets the players to turn up for friendlies"@alanshearer on Ryan Giggs, who's set to be named the new Wales manager

WOW: Saido Berahino has turned up to Stoke City’s training ground to get on the coach to Old Trafford….

…the match is tomorrow. 😳😂🤦‍♂️ pic.twitter.com/epDIeyjjbb