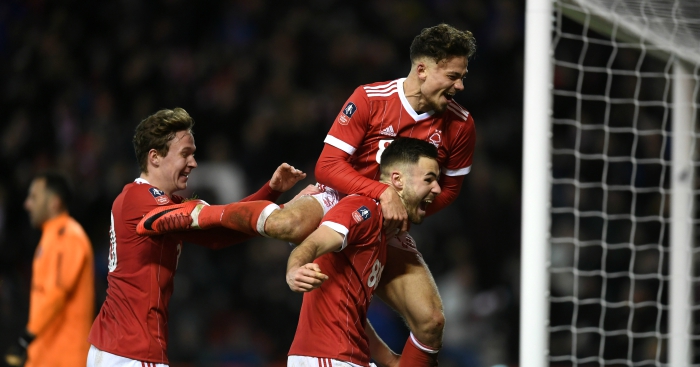 Arsenal and Leeds United were victims of cup upsets, Barcelona extended their La Liga lead over Real Madrid even further and Neymar scored an outstanding team goal for PSG. Here are a few things we picked out from an entertaining weekend.

Playing against big sides can sometimes cause players to shrink into their shell – not this lad.

Wass’ Celta Vigo were up against Real Madrid, and with the score goalless, he tried this audacious effort from 25 yards. Just brilliant.

Dutch striker Dost hit a hat-trick for Sporting in a 5-0 rout against Maritimo in Portugal’s Primeira Liga.

The fact he managed to do so despite having just 13 touches of the ball in the entire match made us weep with joy.

Thanks to Real’s draw with Celta Vigo, Barcelona extended their lead at the top of La Liga to 16 points with a 3-0 win over Levante.

And Brazilian midfielder Paulinho netted his seventh goal of the campaign so far – three more than Neymar had scored last season after the same amount of games.

And in the same match, Suarez completed the impressive feat of overtaking Samuel Eto’o in Barca’s all-time scoring charts.

He’s only been there three-and-a-half years. Bloody hell.

⚽ With that strike @LuisSuarez9 moves past @setoo9 to go 7th on the all time scoring list at FC Barcelona with 132 goals 👏🔵🔴 #ForçaBarça pic.twitter.com/wzB85K3hmz

There aren’t many words that can do this justice, so just watch and marvel at its beauty, and feel sorry for the Rennes players.

The last pass here is precisely the sort of patronisingly unnecessary stuff that tips me over the edge when my team are losing 12-3 at 5-a-sidepic.twitter.com/wtU3LxjHm7

There’s just something about big teams getting beat on rugby pitches that just keeps the world ticking. Rob’s not bothered. Honest. Can we just stop talking about it?

Despite it looking like the kind of thing that happens by mistake at five-a-side, we’re going to give Hakan the benefit of the doubt here.

This is exactly what I like about Hakan. Great ball. pic.twitter.com/wmQiLdQ5xx

This save is so good that you can’t even tell he’s saved it at first.

Despite scoring two in a massive cup upset against Arsenal, Lichaj’s dreams weren’t completely realised. The full-back revealed after the match that his wife has promised to get a dog if he scores a hat-trick this year.

“I was trying to get the penalty but Vaughany (David Vaughan) told me politely to go away,” he said.