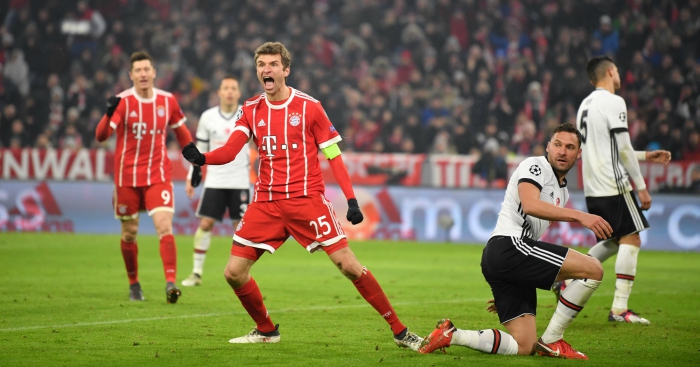 It’s been a busy week for European football, with the rest of the last 16 Champions League first legs getting underway as well as domestic competitions catching up on games in hand.

We’ve been keeping our eye on it, and here’s our pick of the action that you may have missed this week.

Just dancing with a horse, as you do.

A 2-1 defeat away in Europe isn’t necessarily a bad thing. With an away goal to take into the second leg you only need one goal and a clean sheet to progress. Any defeat worse than that is when you’re in trouble.

This perfectly executed piece of skill makes Mats Hummels look like your useless mate who’s been dragged out of the pub against his will to play centre-half on a Sunday morning.

Away from the Champions League, Real Madrid were back in La Liga action during the week, and they were given a scare when Leganes went 1-0 up inside six minutes, with an amusingly-taken goal.

The lead didn’t last long, though, as Real won the match by three goals to one.

After a reign of terror over English clubs, it seems Spain may have finally lost its footballing stronghold in the Champions League.

7 – English sides are unbeaten in all seven meetings with Spanish teams in the Champions League so far this season (W2 D5 L0). Power.

It’s PSG vs Marseille this weekend, and here’s French TV’s teaser for the game. The line at the end reads ‘it’s going to sting’.

After a Porto goal was allowed to stand despite three players clearly being offside and VAR available to the referee, their fierce rivals made this dig on Twitter.

Ahead of their Europa League clash, Leipzig built a special “smoking room” for Napoli coach Maurizio Sarri, who is well known to have a tobacco addiction.

Apparently the Italian club also asked that all smoke detectors in the area were turned off for the duration of their visit.

Despite winning the match 2-0, Napoli were knocked out on away goals, but they were still at their most beautiful for Lorenzo Insigne’s goal.