Nine things you might have missed in Europe: Sancho, Alves, Lewandowski 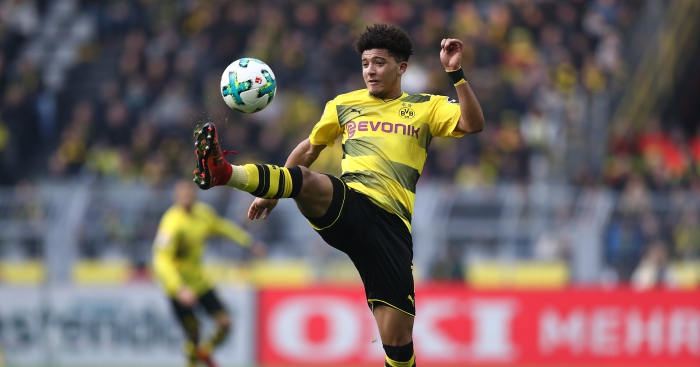 A former Manchester City prospect has been in the news in Germany, while Inter Milan are set to beat Atletico Madrid to the signing of one of Argentina’s most highly-rated prospects.

It has been a busy week in Europe with a number of cup fixtures played, some comedy officiating and the never-ending swirl of transfer rumours.

We’ve take a look at nine moments, news stories and video clips that might have passed you by.

Outfield players in goal, you say? It doesn’t get much better than that.

Daniel Sivorski may have felt hard done by after being subbed off at half-time despite scoring a hat-trick.

But then his replacement, Boy Deul, went and scored three of his own.

The England youth international made an impressive cameo off the bench in Borussia Dortmund’s 3-2 win over Cologne last Friday, but the winger had to leave the field late on and is now set to miss the club’s Europa League tie with Atalanta after it was confirmed he will be out for “several weeks”.

17-year-old Jadon Sancho is worth the price of admission. ⚡ pic.twitter.com/CiHcEDeXGr

The secret behind Napoli’s success this season? Belting the ball at each other, apparently.

The punishment for losing in Napoli training actually looks quite fun. pic.twitter.com/zNWFe9AREA

Yet more reports have done the rounds that Real Madrid hope to sign Lewandowski from Bayern Munich, but the striker has dismissed the notion.

“These rumours do not interest me and I will not say anything more,” he said. “I have no idea [where the reports have come from].

“I did not hear that they [agent Cezary Kucharski and Real Madrid] were talking. I think that’s another piece of speculation.”

Boavista conceded a blatantly offside goal against Rio Ave, with the referee asking for VAR assistance.

Unfortunately for Boavista the goal stood as the camera was blocked by a flag in the stands.

It’s also a little hilarious as you will see in this video of a review between Boavista and Rio Avepic.twitter.com/JHVCgphaXr

We’re not quite sure why the referee had sweets thrown at him during Eintracht Frankfurt’s clash with Mainz, but he had a decent response.

The Argentinian club’s president Victor Blanco told Fox Sports Argentina: “It would be convenient for Racing to keep a percentage value, since they [Inter] will put a release clause of at least €110million [in his contract], which could generate very important money for Racing in future.”

Argentina seems like a hotspot for young and fierce strikers. Having developed the likes ofBatigol, Aguero, and Tevez, Argentina's latest CF prospect is Lautaro Martinez.
[By: @mbappefutbol] pic.twitter.com/rruUz7jkW0

The top 10 dribblers, chance creators, goalscorers and more in Europe

Can you name every Austrian to appear in the Premier League?