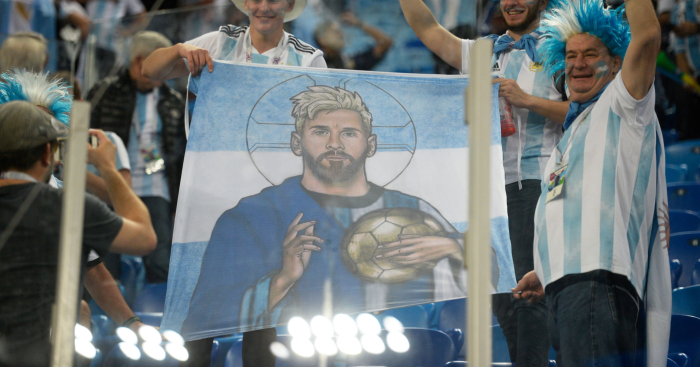 Chelsea and Manchester United players caught our eye on day 13 of the World Cup, but Tuesday belonged to one man in particular.

With all the pressure on Lionel Messi, the great man delivered with a wonderful opening goal as Argentina beat Nigeria 2-1 to secure qualification.

We’ve rounded up the best bits of the action on and off the field.

After Argentina’s win, a reporter told Messi: “After the first game I gave you a good luck amulet that my wife gave me, I don’t know if you threw it away or something…”

His disbelief when Messi shows him he had it on the whole time is wonderful.

He really is the main man.

An interesting 90 minutes in the life of El Diego.

Considering English is his second language, Cesc articulates this perfectly.

I said it once, I say it twice. Football is fucking unbelievable.

He only spent two years in England, but Van Hoojidonk knows all about the country’s psyche.

England has got a good squad of players but they just beat the number 21 and 55 of the @FIFAcom ranking. Whole of England believe that they are gonna be the new world champions . It reminds me of the hype when Tim Henman reached another 2nd round in a Wimbledon tournament …😉

You can’t teach that.