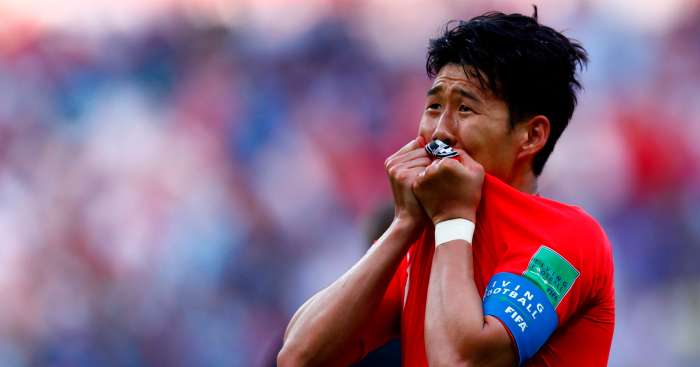 Tottenham and Manchester United men grabbed out attention on day 14 of the World Cup, while a former Liverpool star showed his class once more.

Wednesday brought with it the biggest surprise of the tournament so far as reigning champions Germany failed to make it past the group stages due to a 2-0 defeat to South Korea.

This might be one of the most perfect ‘one of the big boys have really f*cked it, here’ goals.

Now watch it with the Korean commentary.

We’re really sorry, but this should be the top result when you google ‘schadenfreude’.

German fans in Berlin react to their elimination from the World Cup at the group stage after this afternoons defeat to South Korea 😢🤣 pic.twitter.com/NrGKQGjHmm

There was a lot of this between Mexico and South Korea fans.

Re: Korea defeating Germany, thus allowing Mexico to progress to the next round–this video of Mexican fans bumrushing the Korean embassy in Mexico City to thank the ambassador personally, and forcing him to down tequila shots is so beautiful and perfect 😂 #KORGER pic.twitter.com/E1GeZCRrlK

Paulinho labelled Coutinho a “phenomenon” after the former Liverpool man provided a brilliant assist for his Barcelona team-mate.

We’ve only just seen this video of a street in Argentina when Marcos Rojo scored the late winner against Nigeria to put his side through to the knockout stages.

This is incredibly impressive.

Paul Pogba has never played or lived in Spain. He is fluent in French, Italian and English. When asked about #PER, he replies in Spanish. Almost as if his choice of hairstyle has zero impact on football ability, intelligence or linguistic capability.. pic.twitter.com/XfJvFuMvJR

How have we only just found out there’s a different ball for the knockout stages? This could change everything.

A ranking of the best haircuts at the World Cup: Griezmann, Alli, Neymar

Where are they now? The 15 youngsters handed Man Utd debuts by Van Gaal