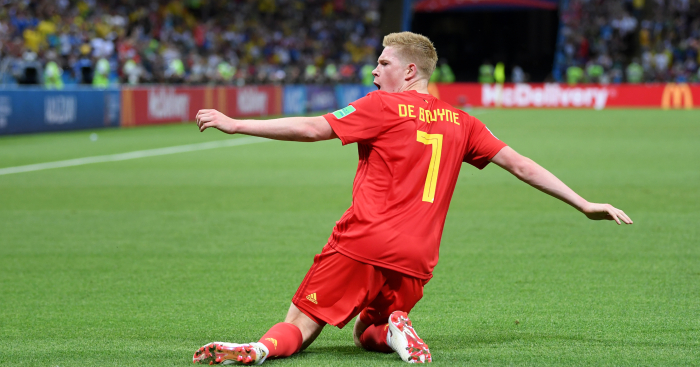 France and Belgium made it through the first two World Cup quarter finals at the expense of Uruguay and Brazil.

Roberto Martinez’s side looked excellent in their victory over the Brazilian side, while France’s victory over Uruguay was significantly helped by a goalkeeping howler.

We’ve rounded up the best of the action from the first quarter final day, as tensions also built ahead of England’s huge match against Sweden.

He’s talked a lot throughout this World Cup, but Courtois put his words into action with this spectacular save late in Belgium’s 2-1 win over Brazil.

And this is an equally brilliant goal.

That win now means Belgium are 24 matches unbeaten, and have scored 78 goals in the process.

For the first time ever, none of Germany, Argentina or Brazil will line up in the semi-finals at a World Cup.

There will be no Germany, Argentina or Brazil in the semi-finals for the first time in #WorldCup history 😳 pic.twitter.com/ZqDIDMWvnf

And for the fifth time ever, it’s all European sides in the semis.

The former Liverpool goalkeeper was not happy after seeing Antoine Griezmann’s shot sneak past Fernando Muslera, saying in this tweet “for us goalkeepers, it would be easier to ‘guess’ the trajectory”.

No more shaking hands for the England team, who have been banned from doing so on medical advice. Fist bumps look cooler anyway.

Exclusive: #ENG manager Gareth Southgate, his players & team staff are greeting everyone with fist bumps, instead of shaking hands – as part of medical instructions for the #WorldCup. Story @iPaperSport: https://t.co/Kx2od6JttG

When the great man says it.

And Becks even has a bet on with Zlatan now.

The terms of the deal have been set 😂 #SWEENG pic.twitter.com/9bJ3D5nHWv