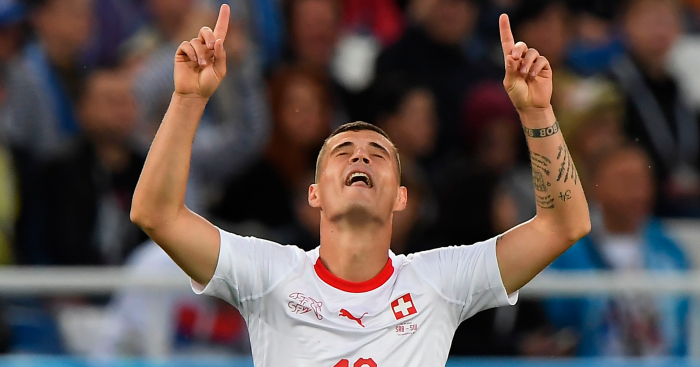 Arsenal and Chelsea stars, plus a potential future Liverpool man, all caught our eye on day nine of the World Cup.

There was plenty of drama on day nine as Brazil, Nigeria and Switzerland all secured tense victories.

Neymar is enjoying himself … #BRA pic.twitter.com/OVYpTR60rs

A brilliant goal, followed by a poignant celebration.

Granit Xhaka's father, an Albanian, was a political prisoner in #SRB in the 1980s.

The celebration tonight? A double eagle – that of the Albanian flag. 🇦🇱

This is ace from Hazard and Nike.

An actual minute’s silence to mourn the national team. They’re really not taking the defeat to Croatia well.

Argentina’s TyC Sports held a minute’s silence in the studio after their 3-0 defeat to Croatia. 😂 #WorldCup pic.twitter.com/dNg0kqXHjx

No, not the players, but between fans of different countries. Wonderful.

Either you dad or uncle kn*bhead who has definitely done this.

Your mum's boyfriend watching the Iceland game in the pub. pic.twitter.com/uZhDBxelh1

Need someone to miss a penalty? Nigeria fans know exactly what to do.

Every Nigerian household as they watch that Iceland penalty😂😂 pic.twitter.com/4k3QNgivsC